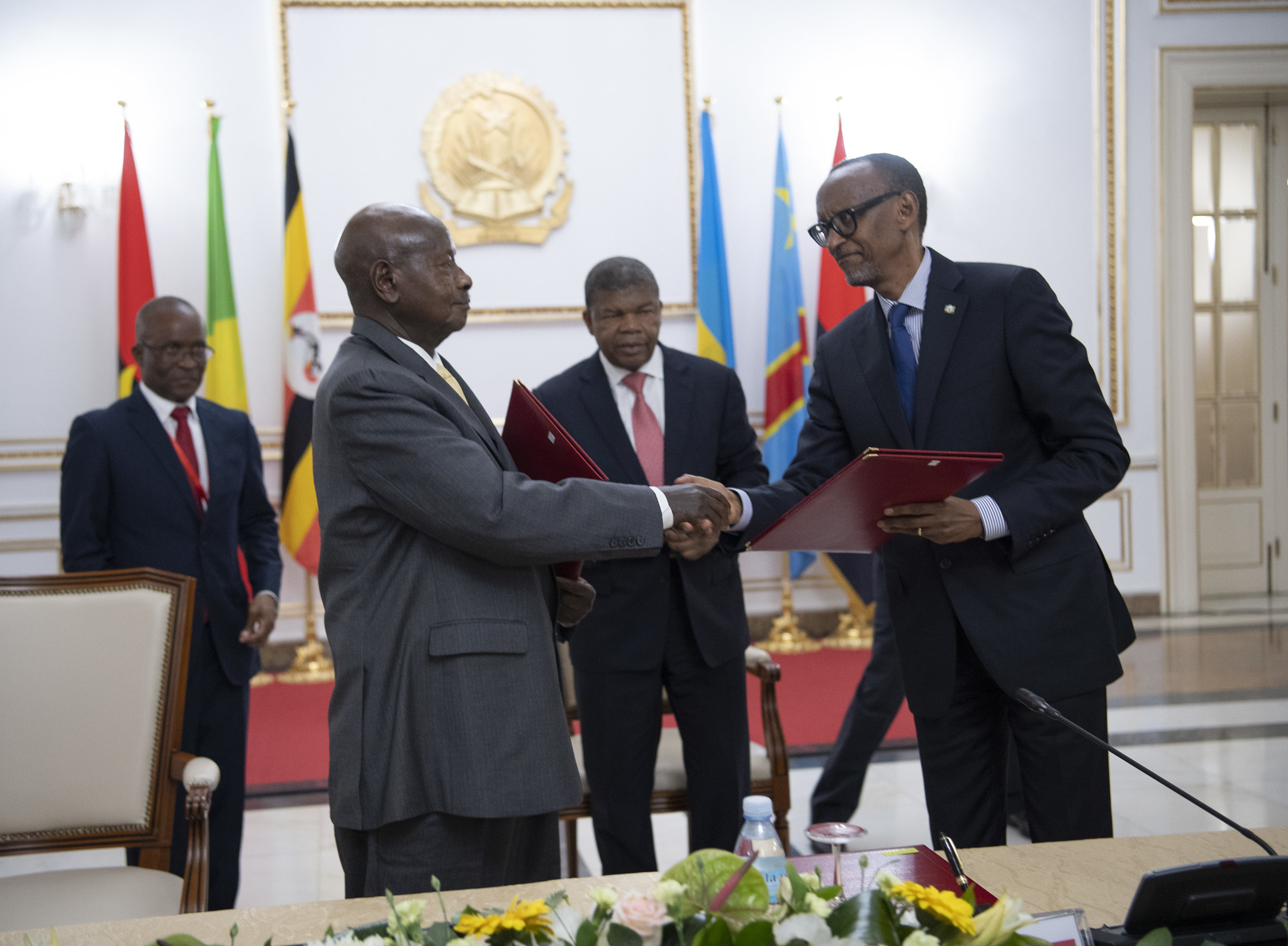 Presidents Paul Kagame and Uganda’s Yoweri Museveni have signed a Memorandum of Understanding to resolve the ongoing tensions between the two countries, with the hope of fully restoring ties.

The MoU was cod-named friendship agreement.

The two heads of state met in the Angolan capital Luanda on Wednesday under the auspices of President João Lourenço of Angola, in the presence of President Félix Tshisekedi of Democratic Republic of Congo (DRC) and President Dennis Sassou Nguesso of Congo Republic.

A copy of the MoU seen by KT Press sets out the terms the two countries will follow in the reconciliation process, including resuming cross border movement of goods and people as soon as possible.

“The parties undertake to respect the sovereignty of each other’s and of the neighbouring countries;” the MoU reads in part, adding “and to refrain from actions conducive to destabilisation or subversion in the territory of the other party and neighbouring countries, thereby eliminating all factors that may create such perception, as well as that of acts that such as the financing, training and infiltration of destabilisation forces,” it reads. 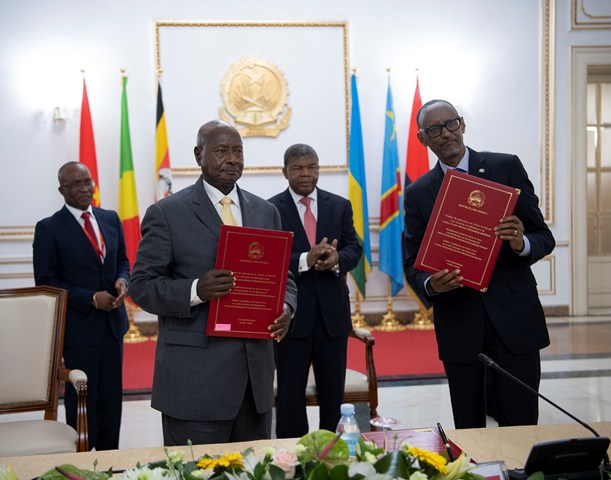 One of the key articles of the MoU says both countries will resume cross border movement of people and trade as soon as possible.

“Resume as soon as possible the cross border activities between both countries, including the movement of persons and goods, for the development and improvement of the lives of their populations,” it reads.

Addressing a press conference after signing the historic agreement which many expect to bear fruit for the relations between the two countries, President Kagame said that the MoU covers all areas which the two countries need to work and which if implemented, it will resolve outstanding issues.

“The MoU addresses all these matters very clearly and I don’t think we should be picking and choosing what we implement and what we don’t,” President Kagame said, adding that he sees no problem working with President Lourenço, President Tshisekedi and more specifically with President Museveni to address what they have agreed to address.

Over the last two years, relations between Rwanda and Uganda have gone through a difficult phase, with Rwanda accusing Kampala of arbitrarily arresting and torturing Rwandans in Uganda, deporting hundreds, supporting groups fighting the Rwandan agreement and economic sabotage.

Earlier this year, tensions escalated between the two countries with Rwanda advising her citizens not to cross over to Uganda for their own safety, while Uganda said it was arresting people suspected of spying and infiltrating security organs.

Kampala also linked the closure of Gatuna One-Stop Border Post to big trucks carrying goods to the tensions but Rwanda has consistently denied these accusations, attributing the closure of the border to ongoing construction works.

Referring to the situation, President Kagame said that when issues between two countries come up, movement of goods and people is affected, expressing optimism that once resolved, the situation should normalise.

“When you have an open border, you have goods and people. When you create a problem for people to move across the border from one side to another, then you have closed the border to people and goods,”

“The MoU addresses all these matters very clearly and I don’t think we should be picking and choosing what we implement and what we don’t,” President Kagame said. 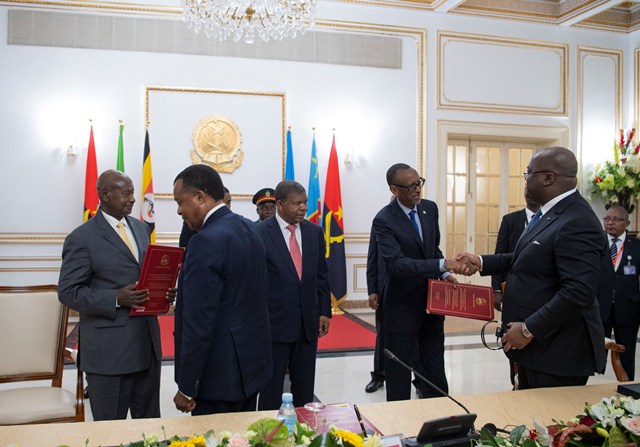 He said that when there are difficulties affecting cross border trade and people not being able to cross or getting arrested when they cross, it affects the movement of people, of goods and trade in general.

He noted that the summit in Luanda presented an opportunity to broadly and extensively discuss many issues affecting the two countries, hence the MoU that was signed which stipulates the path to follow the two neighbours continue to try to resolve the problems.

He thanked President Lourenço and President Tshisekedi for the ‘work and wise counsel’ they put into the reconciliation process of ‘bringing us together’, President Museveni of Uganda and himself, to resolve any problems that have been existing between the two countries

“We are not going to be found wanting in not only respecting the communiqué but also our brothers who have brought us together to reach this understanding,” he committed.

President Kagame said that he doesn’t think it is very difficult to address many of the problems the two countries have but said it may take a bit of time to understand each other but both countries have come a long way.

“We are going to address all these problems. By doing that indiscriminately, we will get where we want to be,” he said.

President Lourenço commended the two leaders for reaching an agreement and thanked President Tshisekedi and President Sassou Nguesso of facilitating the process, promising to support the two countries until they fully iron out the differences.

Previous meetings between President Kagame and President Museveni had not resolved the issues, with arrests of Rwandans in Uganda continuing.

Rwanda has maintained since February that Rwandans cannot go to Uganda if their safety is not guaranteed.

The communiqué further indicates that the two countries and facilitators will continue to work closely, in what is likely to be a lengthy process, to ensure that the challenges are fully addressed and the parties will be held accountable. 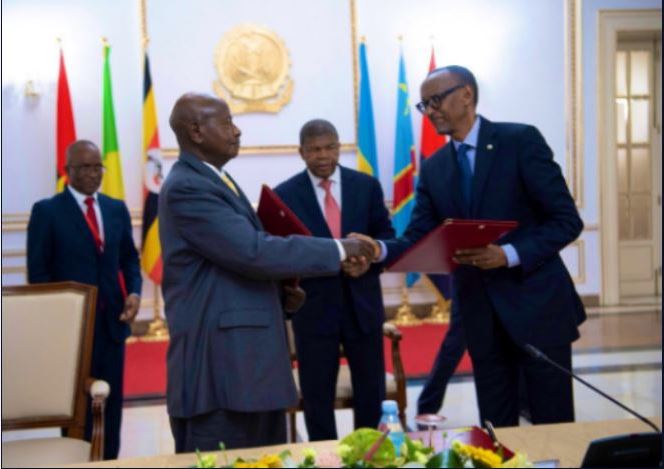 Among other things, an Ad Hoc commission for the implementation of the MoU will be established, headed Ministers of Foreign Affairs and composed of ministers responsible for internal administration and the heads of intelligence of both countries.

Both countries are expected to “keep the facilitators regularly informed of the progress in the implementation of the Memorandum of Understanding”.

“By signing this Memorandum of Understanding, each signatory party is aware that it will be held accountable for the non-compliance of this Memorandum,”

The MoU further indicates that differences in interpretation and implementation of the MoU shall be settled through dialogue between parties or as appropriate through the help of facilitators.