This donation, by Abbott Global, a health technology global company is in partnership with Team Type 1 Foundation, a non-profit organization pursuing a global mission of education, empowerment and equal access to medicine for everyone affected by diabetes.

The kit that was handed over on Wednesday, January 16, will help the 2,000 recorded persons living with diabetes in the country to test their sugar levels, which is a daily task that a diabetic has to track.

Diabetes type one is a treatable disease that affects persons below age 40 and there are 2,000 registered patients living with the disease which has a prevalence rate of 3% in Rwanda.

A person with diabetes type one is required to take an injection of insulin once a day but also monitor their sugar levels to know when to reduce or increase sugar in the body.

Before receiving this equipment diabetic patients say that one was required to be careful and sometimes avoid traveling in places where there is no clinic to avoid facing health difficulties once sugar levels drop or go high.

“Before getting the test kit, I couldn’t know the sugar levels to know how much insulin to inject but with this technology I can check sugar levels and know if I need more water or to reduce eating sugary things,” said Esperance Habinshuti, 30, was diagnosed with the disease at 8years.

A normal day for a diabetes patient requires them to take an insulin injection with the most common being Solostar Lantus pen which costs Rwf23, 000 and has 100 injections. For most diabetes patients without medical insurance, this is quite costly.

They are also required to carry a test kit to be able to monitor their sugar levels. A modern digital codeless kit costs between Rwf50, 000 and Rwf150, 000 depending on the type. 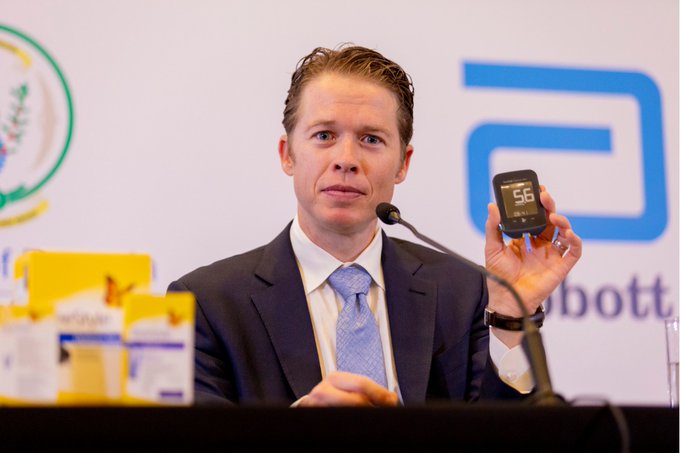 The kit includes a Glucometer, injections and test strips which are used only once whenever sugar levels test in done.

Most of the diabetics cannot afford these kits on top of their monthly treatment for medication which costs between Rwf20, 000 to Rwf30, 000 per month using community-based health insurance.

The test kits donation by Abbott, was requested by Phil Southerland, Founder and President Team Type 1 foundation, who was in Rwanda in 2010 with an all diabetic team of cyclists to participate in the annual Tour of Rwanda cycling competition.

During the tour, Southerland says that he was touched to help Rwandans after seeing some families didn’t have the same privilege to test the sugar levels like his team did.

For Southerland, this is a dream come true to receive this donation from Abbott after he engaged them to the Rwanda Diabetes Association, a request they accepted instantly.

As a 37 year old diabetic, who was diagnosed with diabetes at seven months, Southerland says that with the technology this is a milestone that other people don’t have elsewhere and governments take it for granted on its affordability and access.

“This is a dream of mine that has come true to give insurance to Rwandans with diabetes and now they can pursue their dreams of becoming champions in life, but we need role models to make sure we change the culture and mindset about diabetes,” Southerland said. 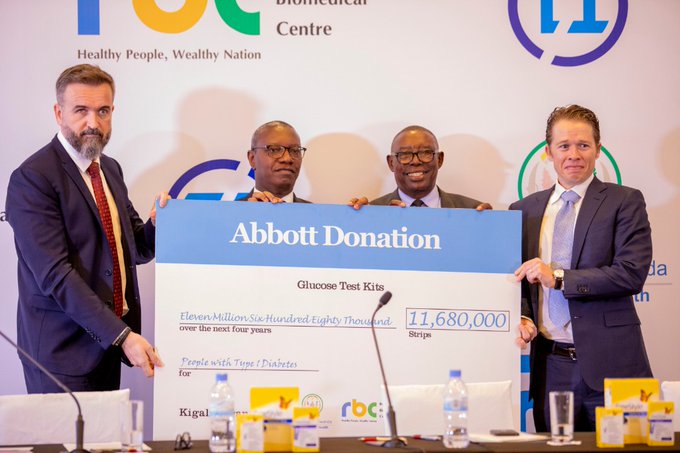 The government of Rwanda has included diabetes on its list of diseases covered under community health insurance for testing, but doesn’t provide the insulin that is needed on a daily basis.

Bernard Brisolier, Business Unit Director for Abbott’s diabetes care business in Africa said the choice of supporting Rwanda was because of the government efforts in improving citizen’s health care.

“We are thrilled to bring this initiative to life and help support the Rwandan diabetes community. We agreed to do so because it is our core value to serve and when the request came in, it didn’t take an hour to say yes,” Brisolier said.

Dr. Patrick Ndimubanzi, the Minister of State in Charge of Primary Health care said the fight against diabetes and pledged more work with all partners to mitigate the impact of this deadly disease especially in prevention.