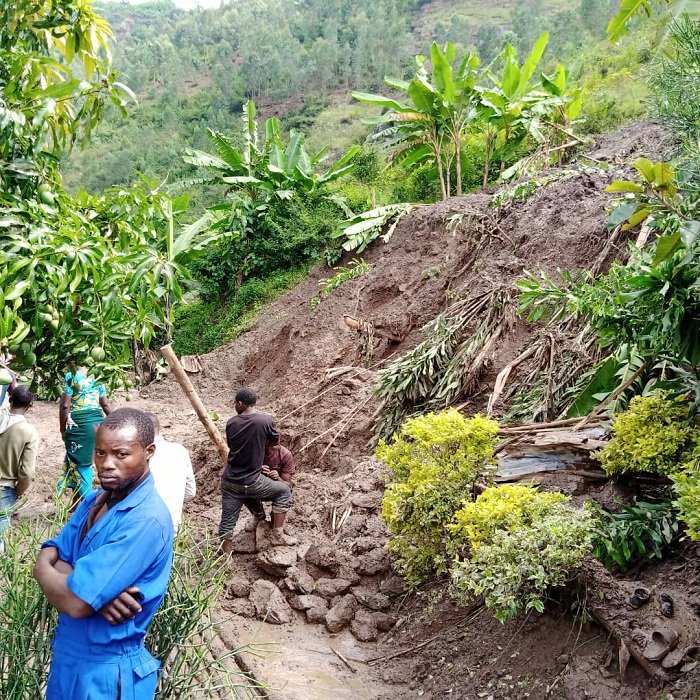 The landslide wiped out a family of seven, buried them under these ruins. Neighbors shocked

A heavy downpour that affected most parts of the country on Sunday – February 2nd caused 13 deaths and 2 injuries – the Ministry of Emergency Management has said in the provisional damage assessment report.

Most shocking case was registered in Jali Sector, Nyaruriba cell, Rubona village where landslide destroyed a house killing a family of seven family members, leaving none to tell the story.

The family members included a mother, her younger sister who was pregnant, her three children, her grandchild and her niece.

The neighbors have no idea about the exact time when the incident happened because it poured till late at night. They woke up only to find that the house was no more, and started searching for their neighbors in the ruins.

They found that all of them had already breathed their last.

Ernestine Mukasekuru, the executive secretary of Nyaruriba cell told KT Press, that the rain was so heavy and it lasted for hours leaving the land in the hilly Jali sector very fragile.

She even advised the neighbors of the deceased family to vacate from the area and find shelter from neighbors as local leaders find sustainable solution.

“Those who have relatives around can find shelter from them, and the rest, we shall find a way to cater them pending a sustainable solution,” Mukasekuru told KT Press.

Six other victims of this rain are from Kicukiro district and Gatsibo district with three victims respectively.

The rain destroyed 15 houses, 12 of them from Nyarugenge district-city of Kigali.

Meanwhile, a trending amateur video shows a child who was saved from the floods in a huge water channel of Nyabugogo, the busiest neighborhood of Kigali yesterday.

The child – a young adolescent is allegedly a street child who was sleeping under a bridge when flood surprised him. He woke up as a matter of urgency and stood on a big stone which was carried by floods earlier in the middle of the water channel and started crying for help.

Suddenly, a crowd converged to the place, shouting. Only a young man in his thirties was bold enough to go down and to carry him from his back to the surprise of the crowd.

Rwanda is looking at the rain incidents in wider perspective.

According to the Rwanda Meteology Agency, it will keep raining heavily for yet more days in districts of Rwamagana, Kayonza, Gatsibo, Nyagatare, Rulindo, Gicumbi, Gakenke, Muhanga, Ngororero, Gisagara and Rutsiro.

Their radar indicated that this heavy rain will affect all the districts of the country.

Yesterday, the radar indicated that heavy downpour will keep hitting more particularly the districts of Kamonyi, Gatsibo, Gicumbi, Rwamagana, Rulindo and Rutsiro but rain will not cease in other districts neither.

The country’s climate is becoming quite stable and unpredictable. In normal trend, January-March consists of short dry season  commonly known as ‘Urugaryi’ in mother tongue.