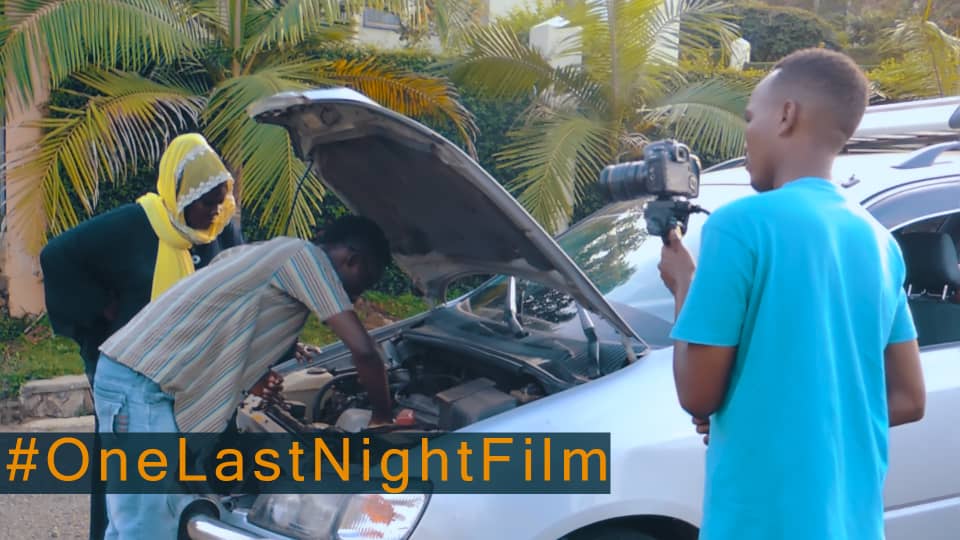 At the time when Coronavirus is thwe talk of the city, a Rwandan filmmaker has a new film that will help families learn to stick together in the hardest moments.

The new film, ‘One Last Night’ written, produced and directed by Suleiman Zion featuring local actors and shot from local scenes in Kigali, will be released this May 2020.

One last night is a story of Babrah (main character), a woman who remarried in her 40s with a man of two children. Even though her husband is always busy at his work, it doesn’t discourage Babrah as a mother to see the children’s dreams come true.

Babrah dedicates her life to these children, guarding them and parenting them as a mother. She loves them with all her heart and she will do anything to see them happy.

The film title is built on last days of the family holiday where Babrah and her husband arranged for the children a one night trip, and on the way, they get involved in a car crash in the middle of nowhere.

Babrah and her family after the sun goes they started looking somewhere to rest and move on the following car, they end up knocking on the house of an old woman, they were allowed to enter without knowing that it’s a house or a family of vicious and bloodthirsty village witches.

Soon enough Babrah realizes that she will be fighting for the lives of her stepchildren.

Zion says that the idea of the film came from hearing stories of stepmothers being seen as enemies in the family instead of being pillars of broken families, an issue that most families are faced to deal with today.

“The movie shows how powerful family can become if it comes together and fight together against evil, it shows we should not judge people because of their tittles (like Stepmom),” Zion says.

The local home box office film is produced as a romance, action, suspense, drama and a horror keeping viewer with more questions, bringing hope and comfort in which everyone is invited to identify with her struggles.

“Every movie has its own style, and ‘One Last Night’ will have an equivalent mix of love and drama as a writer, I pride myself on utilizing high energy but injecting it with real drama and humanity in order to allow the audience to deeply feel Babrah’s passion and sacrifices as a stepmother,” Zion said.

Zion, who has previous produced films like ‘Dangerous Mom’, Nailed Horror…..says that he has spent a very longtime on this film and now that it’s ready, he expects a lot from his third film, and plans to sell it on the global film market and festivals.

“It’s a movie that I have arranged to pitch to my fellow filmmakers and worldwide. I would say this is the movie I have been dreaming of making since I started my career and it’s the best movie I can produce in this 2020 and be proud of indeed,” he said.

Zion says that the film wouldn’t be a success without the commitment of local actors and a crew who were motivated to be a part of it, and they brought up their best performances and skills in this product.
As all Rwandans wait for this film debut very soon, there is a trailer (sample) that can be watched to have a taste of what to expect.