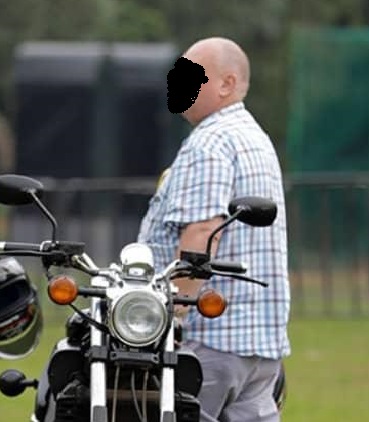 The family of Matthew Robert Wilson, a British national who passed away on April 3 in Kigali, says he died of natural causes, clearing rumours that he could have succumbed to COVID-19.

Wilson, 56, who was fondly known as Matt, died alone in his house located in Kacyiru Sector, Gasabo district, at a time when the country was observing a lockdown to avert the spread of New Coronavirus.

His death was followed by rumours which circulated on social media that he could have succumbed to the virus which continues to wreak havoc on countries across the world.

“It is with an extremely heavy heart that we announce the death of Matthew Robert Wilson, a much-loved Son, Brother and Uncle on Friday 3rd April 2020.  Matthew passed away at his home in Kigali, due to natural causes, having been self-isolating for a week,” a family statement released on Thursday said.

“Due to the current situation globally, we are unable to organise a memorial service to celebrate Matthew’s life but will endeavour to do so when things return to normal.  I know he has many friends who would like to say goodbye properly,” the statement adds. 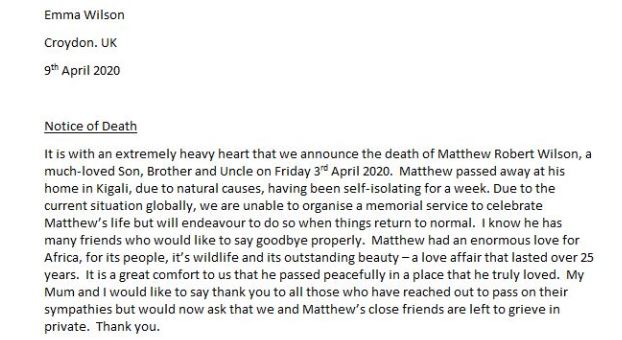 Matt’s death was reported by a Canadian friend based in Kigali whom he had called earlier and informed of his sickness and fear that he was unlikely to make it. Matt was known to live alone at the time of his death.

The friend went to his house and found him already dead and alerted authorities. He remained at the scene until RIB arrived.

Dr. Sabin Nsanzimana, the Director General of RBC said that upon being informed by RIB of the sudden death and the circumstances surrounding Matt’s demise, a team was dispatched to conduct precautionary measures, including disinfecting the house before the body was taken out for testing.

“We did an exam which involved testing his body, using the same methods we use to test new coronavirus. The results showed that there was no coronavirus in his body,”

“We also carried out tests on his contacts who we had briefly isolated but the tests were also negative and they returned to their respective homes. Even though people had fears, which are understandable at this time, the most important message they need to know is that the tests were negative,” Dr Nsanzimana said in an interview with KT Press.

The RBC head cleared the air saying that is normal for people to speculate about any death at this time or even to self-isolate if they feared that they contracted COVID-19 but ultimately it is only the test that can confirm whether one has the virus or not.

“It is fine for people to have suspicions or even speculate on death especially at this time but in the case of Matthew, we ran the tests of COVID-19 and they turned out negative. His family was given the report,”

“Unfortunately we cannot reveal the cause of death due to privacy of such information but we want to set the record straight that his death had nothing to do with COVID-19,” he emphasized, adding that everyone in the country was in isolation, including Matt who was known to live alone.

On Wednesday, the RIB Spokesperson, Marie Michelle Umuhoza told KT Press that as a precaution, when sudden death is reported, since the outbreak of COVID-19, RIB Forensic teams go with RBC to the scene.

“It is a standard practice to go with the RBC team when a sudden death case is reported especially at this time of the pandemic. We take all necessary measures to ensure that people are not infected in case it is a COVID-19 related death,” Umuhoza said.

She explained that it is possible for eye witnesses to speculate that COVID-19 is involved due to the precautionary measures taken at the scene of death, until tests are conducted on the body, first to ascertain if Coronavirus is the cause of death or not before proceeding to confirm the actual cause of death.

“This is what happened in the case of the deceased. We went to the scene with a team of people from RBC who took the body for tests to check if he died due to COVID-19. The results showed that he did not have the virus,”

“His family was informed of the cause of death, which we are not in position to reveal. Only his family or legal representative can do so,” Umuhoza said.

She urged the public to desist from spreading unfounded rumours, emphasizing that going to a death or crime scene with medical staff and equipment is a precautionary measure and should not be misinterpreted.

Matt had lived in Rwanda for 12 years, with his family emphasizing that he had lived or worked in Africa for the last 25 years.

“It is a great comfort to us that he passed peacefully in a place that he truly loved,” the statement signed by his sister Emma Wilson reads, asking that the family and close friends be left to mourn in private.

The Croydon, England native owned Colours Company Ltd, a printing company in Kigali. He is remembered for his fondness for fast cars, loud music and big motorbikes.