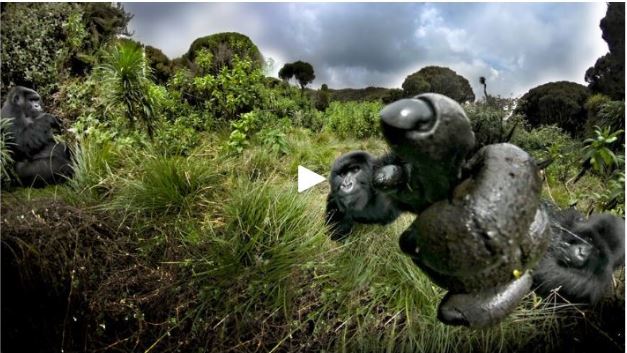 Through the Ellen DeGeneres Wildlife Fund, which supports global conservation efforts for endangered species, a Gorilla film – “Gorillapalooza” that managed to raise $4million for the gorilla conservation initiative is now brought to you for free in virtual reality (VR).

VR is a new way of looking at reality of existing and nonexisting things through augmented reality. It is a simulated experience that can be similar to or completely different from the real world but the technology blends what the user sees in their real surroundings with digital content.

Ellen DeGeneres, a US TV host and philanthropist who loves gorillas watched this VR version which left her mesmerized.

“Isn’t it incredible? It’s like you’re with the gorillas!” DeGeneres said.

To download the amazing footage of these gorillas in your own VR device at the highest quality, you can go here.

With a little more than 1,000 mountain gorillas remaining in our planet, this is the only great ape in the world whose population is rising.

Gorillas are an important part of the forest ecosystem, as they trim plants while they eat and constantly spread seeds around the forest.

Like humans, gorillas can’t naturally swim, they have 10 fingers, 32 teeth, forward-looking eyes and sharp color vision. Did you know we share 98% of our DNA and have the same blood type as gorillas?

Gorillas live in family groups made up of 2 to 40 gorillas. Each group has one dominant male called a silverback who protects the troop, defines the group’s territory and routines, and has breeding rights to all adult females in the family.

Adult female mountain gorillas give birth to one baby every three to five years. And while twin gorillas are rare, a few twin babies have been spotted in the wild and in captivity.