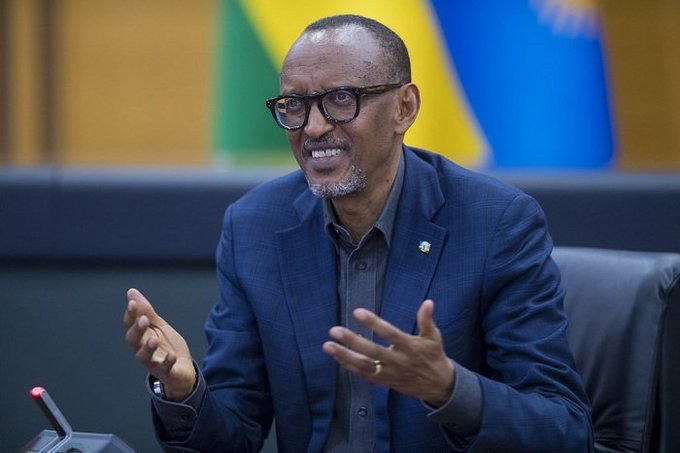 At a time when the East African Community (EAC) partner states have been faulted for lacking a united front to combat COVID-19, President Paul Kagame has extensively spoken out on the underlying issues that have led to countries going it alone and allegations that he has not led the region as expected since he is the chairman.

President Kagame, who seemed to express his frustrations on the manner some countries have failed to respond to or participate in regional efforts to combat COVID-19 outbreak said that efforts are ongoing to ensure that countries are on the same page.

“I am the Chairperson of the East African Community currently, that implies responsibility in a sense but even being the Chair of the EAC, you don’t manage partner states affairs,”

“Still countries manage themselves the way they deem fit, even if one would wish that we look at it in a sense of collective responsibility, working together to solve this problem we are facing all of us,” he said.

The Head of State said that a number of meetings at the regional level have taken place since the New Coronavirus outbreak, including that of Ministers of Health who met virtually and agreed on how to coordinate the fight against COVID-19.

“There was a need for continuous meetings and the effort is ongoing. We attempted to also hold a Summit for the Heads of State to meet and discuss and give direction in a coordinated way. This did not happen,”

“In essence, here we were affected more by the procedures than really the substance. In other words, the collective responsibility we have and he problem we have is where the procedure takes precedence over substance,” President Kagame said, suggesting that without the procedures, willing countries would have gone ahead without waiting for others.

Despite that, he said that there are other things the bloc needs to work on and find solutions by harmonizing and working with each other especially on cross-border activities such as trucks and their drivers which in recent days have been in the spotlight for being the carriers of the virus across the borders.

“As you have seen in the case of Rwanda, we are noticing a problem. While we had taken full control of the situation and reining in the virus, in fact we know we had more people who had recovered than those who were being affected, who were still in isolation but all of a sudden, cross border activities introduced other numbers rapidly and we are now also trying to deal with that,”

“And there is no better way of dealing with that than through regional cooperation and coordination and understanding each other so that we manage this common problem,”

“So responsibility, yes, I have a responsibility because I am one of those leaders of the partner states, at the same time I am also the chairperson of the EAC but you will also understand that even being a Chair you still have certain limits imposed on how much you can do, even if you wanted to do it,” President Kagame said.

President Kagame also spoke about circulating allegations that Rwanda Defence Force (RDF) was in the Democratic Republic of Congo (RDF), involved in the upsurge of attacks in the eastern part of the country which recently claimed rangers in Virunga National Park.

The Head of State said that Rwanda is used to the allegations, which it has lived with for the last 26 years, dating back to the days genocidaire groups pitched camp in Eastern DRC, where different armed groups have been formed and evolved over the years.

“What is even worse is a certain group of people, I don’t know what to call them, who should be actually responsible for dealing with this situation, end up perpetuating the situation. All these survive on myth, rumours, all kinds of things you find anywhere, including surprisingly, the experts,”

“There are experts who have been operating in this region for the past 26 years. They tell the same story, sometimes spread the same rumours, another time spread even the same lies and that is what we are now used too for the last 26 years without seeing a solution to this problem,”

President Kagame said he gave the background because he was hearing the same stories and wanted people to understand the genesis of it all.

In reference to the situation in South Kivu, particularly Uvira and Minembwe areas, south of Bukavu, he said that he is surprised that the experts choose to ignore what is actually going on there and instead choose to see what is not there.

“What I mean is that how can somebody be talking about Rwandans or RDF in that part of the region, because they are not there, and this same person or these people don’t see the very things happening there?”

“We have a number of rebel groups, you can’t count them easily, in that situation. They involve Burundians, they involve people from here, those old groups connected with FDLR (Democratic Forces for the Liberation of Rwanda) that kept breaking up into different groups,” he said, adding that all those groups have been active in that area, working with different groups such as the Mai Mai and other groups from Burundi, all fighting each other.

“It is a cocktail. It is a mess. I don’t know whether people are confusing genuinely or deliberately, the Rwandans that are there and have been there for a long time, these offsprings of FDLR, not RDF, these are two different things,”

Even in North Kivu, President Kagame said it is the same situation but added that the good thing the current government of DRC has been very helpful in working with regional countries to address the conflict in the eastern part of the country but those propagating the lies don’t see it as a good thing.

He said that for the perpetrators of the conflict, a collaboration between DRC and neighbouring countries goes against their plans to preserve the conflict in DRC. He said the same groups have been wrongly informing the government of DRC that Rwanda is coming in but they don’t complain about the groups like FDLR.

He said that despite the presence of UN forces in Eastern DRC, FDLR has been given the entitlement to operate as they wish but it becomes easy to falsely accuse Rwanda of being involved in DRC, something he said has become an answer to every problem in DRC for the groups that benefit from the conflict.

President Kagame was asked about a recent $1m contribution Rwanda made to the African Union (AU) COVID-19 Solidarity Fund and to the Africa Centre of Disease Control (CDC) rather than spending it on Rwandans and he said that in this case, it is not a question of “either” “or “you can’t do both” but rather a situation where you have to do too many things at the same time.

He said that claims that the money contributed to the AU COVID-19 solidarity fund and to the CDC is a misplaced effort are not true.

“We know that we have Rwandans to take care of and primarily, they come first, there is no question about it. But that also means you may recall that there are other things being done for Rwandans as well,”

“I think working together as Africans, whether it is sub region or the continent, or even internationally, you are not going to run away from the responsibility of making your contribution, which in a sense, by the way, feeds back to you,” he said.

President Kagame observed that when the Africa CDC and AU are doing well, Rwanda benefits directly. He said Rwanda contributed like many other countries did contribute to a noble cause and believes that there will be benefits accrued from the contribution.

He said the $500, 000 to each of the institutions might feel like a big thing but the country has mobilized much more than that in funds to support Rwandans, adding that in fact the $1m is part of the resources that were mobilized, a bigger part of which is going to Rwandans.

“It depends on how you want to look at it. The way we looked at it is the way we acted and I think you will agree with me at the end of the day that there is more benefit from this collective effort than the $1 million we put there,” he said.