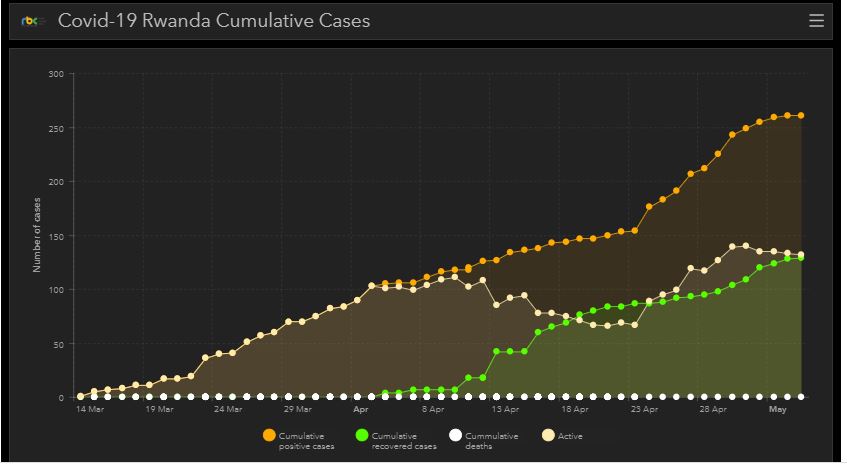 Rwanda did not record a new case of New Coronavirus on Tuesday as the country completed two days of relaxed measures which replaced the full lockdown, signaling progress in containing the spread of the virus and cross border transmissions.

The Ministry of Health said on Tuesday that there was no positive case out of 896 samples tested in the last 24 hours. The total number of confirmed cases in Rwanda remains at 261.

Active cases are 132 while recoveries are at 129, with one new person discharged on Tuesday while there are not fatalities yet.

Appearing on the national television earlier on Tuesday, the Minister of State for Health in Charge of Primary Healthcare, Dr Tharcisse Mpunga said that the assessment done by the government shows that the measures put in place by the government to contain the spread are paying off.

He, however, warned that there is still a gap in people paying attention to safety measures including wearing masks after it appeared that many people were not properly wearing them as required.

“We encourage people to make sure they observe these measures to protect themselves. COVID-19 remains a threat,” he said, refuting reports that there is a shortage of masks.

He said the licensed manufacturers are releasing at least 300, 000 masks daily, which means that there are enough affordable masks on the market for everyone, noting that some people choose to improvise, coming up with their own masks which might not be up to the standard.

He said more sample tests will continue to be carried out, focusing on people in areas where many people convene such as construction sites, industries and more.