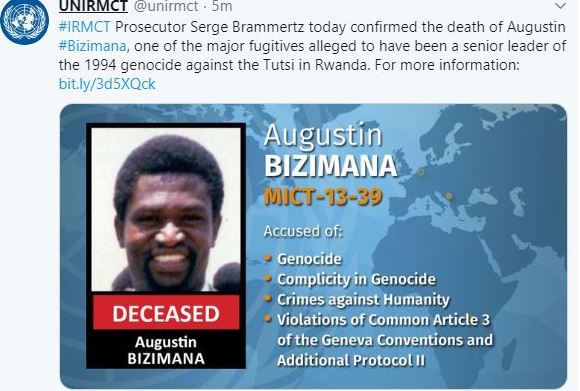 Following the confirmation of the death of Augustin Bizimana, one of the most wanted fugitives of the 1994 Genocide against the Tutsi, Rwanda says the United Nations and the International community should continue facilitating efforts to find the remaining genocide fugitives.

The confirmation of the death of Bizimana, a former Minister of Defence in the interim genocidal government by the International Residual Mechanism for Criminal Tribunals (IRMCT) on  came barely a week after the arrest of Felicien Kabuga in Paris France, last week.

The Minister of Justice and Attorney General said the announcement and possible conclusion of Bizimana’s case by death and the arrest of Felicien Kabuga, another of the most wanted fugitives in France, last week, is a sign of sustained momentum.

“Even though it is 26 long years since the genocide against the Tutsi, this development, together with the arrest of Kabuga, shows that the pursuit of genocide fugitives is now reshaped and recharged. I think there is a new momentum,” Minister Busingye told KT Press.

The IRMCT Prosecutor Serge Brammertz confirmed the death of Bizimana on Friday, saying that the confirmation is based on the conclusive identification of Bizimana’s remains in a grave site in Pointe Noire, the Republic of the Congo.

As the Minister of Defence in the Interim Government during the genocide, Bizimana was indicted by the United Nations International Criminal Tribunal for Rwanda (ICTR) in 1998 but he had remained elusive.

Minister Busingye said Rwanda had provided all the necessary details the ICTR and later the residual mechanism needed to trace the whereabouts of Bizimana.

Bizimana was charged with thirteen counts of genocide, complicity in genocide, extermination, murder, rape, torture, other inhumane acts, persecution, cruel treatment and outrages upon personal dignity, all in relation to crimes committed during the 1994 genocide.

Among the crimes charged, Bizimana was alleged to be responsible for the murders of former Prime Minister Agathe Uwilingiyimana and ten Belgian United Nations peacekeepers, and for the murder of Tutsi civilians throughout Gisenyi, Ruhengeri, Butare, Kibuye and Cyangugu prefectures.

Brammertz said the confirmation of death is the result of an exhaustive investigation by the Office of the Prosecutor combining advanced technology with extensive field operations, and involved exceptional cooperation with partner authorities in Rwanda, the Republic of the Congo, the Netherlands and the United States.

Late last year, the Office conducted DNA analysis on previously-obtained samples of human remains from a grave site in Pointe Noire, the Republic of the Congo.

“Subsequent investigations and comparative DNA analysis by the Office over the last several months ruled out that the remains were those of any other person,”

“The Office further verified additional evidence concerning the circumstances of Bizimana’s death. Accordingly, the Office confirms today that Augustin Bizimana is deceased. It is believed that he died in August 2000 in Pointe Noire,” IRMCT said in a statement.

The forensic investigation was facilitated by Netherlands Forensic Institute and the United States Armed Forces DNA Identification Laboratory who IRMCT says provided critical technical support and assistance in this matter.

With the arrest of Félicien Kabuga last Saturday and today’s confirmation, the Office of the Prosecutor has now accounted for two of the three major fugitives indicted by the United Nations International Criminal Tribunal for Rwanda (ICTR).