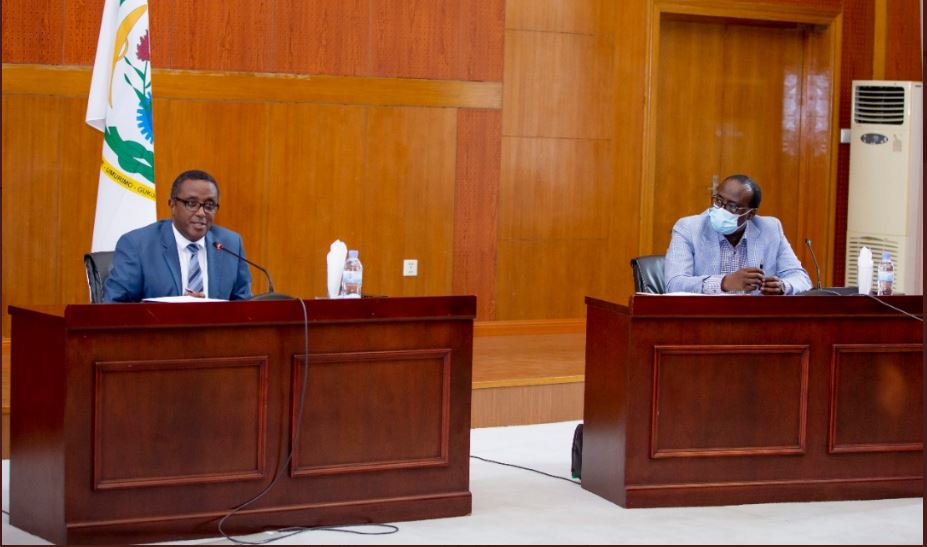 Rwanda and Tanzania have reached an agreement on the way forward following days of a stalemate after Tanzanian truck drivers protested measures put in place by Rwanda to avert cross-border transmission of New Coronavirus.

The Minister of Foreign Affairs and International Cooperation Dr Vincent Biruta confirmed to KT Press on Friday evening that an agreement had been reached with Tanzania and trucks would resume moving on Saturday morning.

“Talks have been concluded. Movement of trucks to start tomorrow,” Dr. Biruta told KT Press in a short message.

Earlier on Friday morning during a press briefing, Dr Biruta had told a press briefing that a virtual Ministerial meeting between Rwanda and Tanzania was scheduled for Friday evening with the aim of arriving at a solution to the stalemate which has seen trucks destined to Rwanda remain stranded at Rusumo One Stop Border Post.

Tanzanian truck drivers were adamant to adhere to the measures put in place by Rwanda, which would require them to hand over their trucks to their Rwandan counterparts who would transport the goods to their final destination, in order to minimise cross border transmission of COVID-19.

Similarly, Rwandan trucks headed to Dar es Salaam were blocked by protesting Tanzanian drivers in revenge for the measures instituted by Rwanda. Dr Biruta said that since the implementation of the measures, cross-border New Coronavirus cases declined tremendously.

“Discussion with Tanzania are going on and we are planning to have the second Ministerial session this afternoon. We had a previous meeting where we were not able to conclude on two particular points,”

“One was on swapping of drivers at Rusumo border post. The other one was related to the escorting of trucks with perishable goods and fuel because those ones could not offload at Rusumo. So, we were stuck on those particular points,” Dr. Biruta said earlier before the countries could agree.

He said Rwanda had made proposals to Tanzania which would be discussed on Friday afternoon, adding that there was no option of not agreeing because both countries were looking to ensuring that the central corridor route is restored as soon as possible.

Dr Biruta said that businesswise, both Rwanda and Tanzania were losing given the situation in Rusumo and Benaco and both needed to find a solution.

“What we are discussing here is business. Rwanda is not the only party to lose in this standoff. It is business, I guess Rwanda is losing money in this situation, Tanzania, the same. We need to find a solution,” Dr Biruta said.

“Not reaching an agreement is not an option because both of us need to get the movement of goods restored and we need to do everything possible for us to get this central corridor open for business again,” Dr Biruta said.

The Minister of State for Foreign Affairs in charge of the East African Community (EAC) Prof Manasseh Nshuti said that Rwanda remains focused on the measures to stop the spread of New Coronavirus, including cross border transmissions which are proving to be a problem in the region.

Earlier, Dr Biruta explained that Tanzania had opted out of the Consultative Meeting of EAC Heads of State which was held on Tuesday, chaired by President Paul Kagame, the sitting chair of the EAC. Tanzania said it was more interested in bilateral talks with Rwanda to resolve the standoff.

Similarly, Kenyan Truck drivers were also protesting measures of handing over trucks to Rwandan drivers at Kagitumba One Stop Border Post but the situation has been resolved and trucks have started moving according to Dr Biruta.

On Kenya, Prof Nshuti said that a solution had been arrived at, which would see Kenya test truck drivers before arriving setting off for regional countries and they would be tested again at the destination, which the positive ones are not cleared to ferry the goods.

He said relations with Tanzania remained jovial despite the situation, but the two countries would arrive at a solution, citing the deal for Rwandair to transport Tanzanian fish from Mwanza to the European market as an example of positive relations between the two countries.