Sponsored: KIAC-Arbitration Vs Litigation, Choosing to Save Time and Money 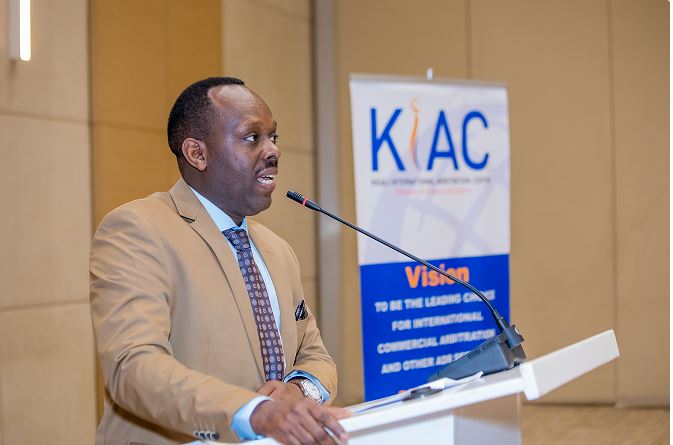 The Kigali International Arbitration Centre (KIAC) has advised on the best choice to make by parties/partners in a project or contract concerning the resolution of a potential dispute that may arise; it’s all about the cost.

Arbitration and mediation mean solving a dispute without going to court and this new approach in Rwanda is what KIAC stands for since its creation in 2010.

Dr Fidelde Masengo, the Secretary General of KIAC explains that arbitration and mediation are ways of solving disputes using professionals that parties in a contract chose by themselves, as opposed to litigation where a judge they did not choose hears a case and rules on it.

“The mediator is someone who does facilitation in solving the dispute. Their job is to help parties to reach common ground, a solution to their dispute,” Masengo said while at KT Radio’s Sato Concord last week.

While in the past, some people could tend to disregard a decision taken in front of the mediators, Masengo said that new policies are changing things where a person who failed to comply will not be allowed to file the same case to court.

However, for arbitrators, it has become now common in Rwanda; the ruling is enforceable by court bailiffs.

“Arbitrators make a ruling which can even be enforced by a court bailiff. In other words, parties give an arbitrator the same power that a court has in solving disputes.”

Arbitration and Mediation: What Do you gain?

Arbitrators/mediators are chosen by the parties themselves which is different from the court where a judge you did not choose is there whether you like or not.

That means a mediator or arbitrator is chosen depending on the expertise that is required to resolve a dispute. A dispute which involves construction will require a civil engineer or related field while a dispute involving petroleum products will require an expert in this particular field.

“Arbitrators are more knowledgeable than judges because, you may have an arbitrator who is a civil engineer in case the dispute involves engineering,” Masengo said.

Mediation and arbitration are famous for speeding up the resolution of disputes because the schedule is recommended by the clients. The process is highly flexible, according to Masengo.

Moreover, contrary to courts where cases are heard in public, arbitration takes place in confidentiality. Parties choose a convenient environment for them and let in only the person they want.

“This becomes very interesting for businesspeople: when a business person is involved in a litigation case, he will attract the public attention with people thinking that all is done for him, while he can even win the case and be fine,” Masengo said.

The flexibility of arbitration and mediation also means that parties in dispute can choose the time of proceedings, while in court, they have to come on d day, and missing the appointment may mean waiting for another reschedule which would come after a much longer period of time.

KIAC Position in the world

The institution has a board put in place by the Private Sector Federation and it includes Rwandans and foreigners who take important decision including recruitments of staff among others.

Among other things, said Masengo, we empower people not to go into court, to be able to manage the work/business relationship.

“We actually encourage them to have negotiation without having to find a conciliator or going to court,” Masengo further said.

From experience, KIAC officials said that, investors and other people enter a contract and agree on every other things very carefully but they talk about clauses that provide how a dispute will be resolved only in passing.

“We actually call them “midnight clauses”. Traders may agree on transactions to make, how they will deliver goods, but they talk about the clause about dispute resolution only at the last minute.”

Masengo said that, provisions on dispute resolutions should be given great consideration because they can otherwise raise several issues to one of the parties who took them for granted.

For example, it happens that some people put in their agreement a clause according to which, the seat of arbitration would be abroad- and venue could also be abroad.

This, according to Masengo, is important because it can imply other costs to one of the partners.

Who Can be an arbitrator or mediator?

According to Masengo, since the start, KIAC provided a series of training to several people, including arbitrators and mediators.

“We partnered with an institution from UK to train people who have something to do with arbitration including legal advisors, judges, CEOs of some companies, and procurement officers. We have trained more than 500 people in that category,” said Masengo.

Beneficiaries in this category were given general training on arbitration in the context of awareness information which takes place in an institution, free of charge.

“We are fourth African country to have trained many people on arbitration after South Africa, Nigeria and Kenya,” Masengo said.

As for the professional training for those who want to become arbitrators and mediators, one needs to have a university degree and to be guided by the laws of the applicant’s profession.

However, the charted institute of arbitrators in Rwanda was approved which means that in the future, one will only be required to be a member of the latter only.

For mediators, the 40 hours-in-class training and assignments go up to $500.

For arbitrators, an intensive three-day training goes for $ 500 or $300 when it is online.

However, to qualify for an international arbitrator-mediator, one may need to go up to the third level of fellows where the training may cost up to $2000.

“The more you are trained, the more you get to be known and in several instances, arbitrators from Rwanda get jobs in other countries,” Masengo said adding that “arbitration and mediation is a noble profession.”