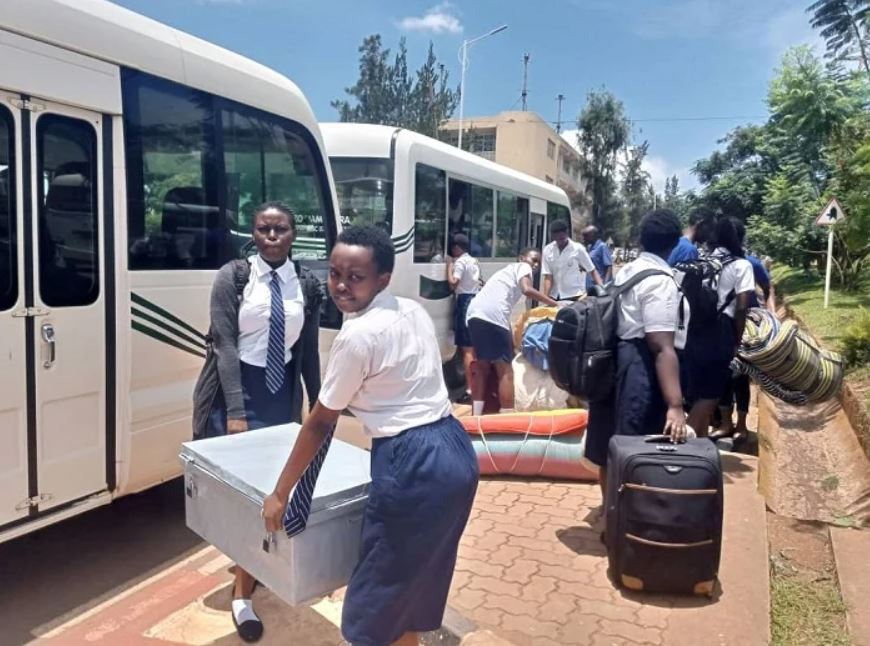 The Ministry of Education(MINEDUC) has directed schools to stop asking for mandatory pregnancy test certificates from female students as a requirement for admissions as schools reopen after seven months of temporary closure to combat the further spread of the New Coronavirus.

The directive followed fury on social media after some letters of some schools writing to parents requesting them to send their daughters back to school with certificates showing that they are not pregnant.

Schools are set to reopen for the academic year 2020/2021 on November 2. The requirement for girls angered rights activists who said the requirement does not only humiliate girls but it is also discriminatory in nature.

MINEDUC directed schools to stop asking for pregnancy test certificates for female students calling it a ‘discriminatory and unjustified practice’.

“The practice of mandatory pregnancy tests for girls as a condition for school admission is discriminatory and unjustified. MINEDUC is carrying out inspections to ensure that schools end this practice,” MINEDUC wrote on Twitter..

According to the parent’s letter from Blu Lake International School (BLIS), the school management requested parents to present a pregnant test certificate for their children without fail as they report back to school.

“The management of BLIS would wish to thank you for the cooperation you have shown us during this hard time,” part of the letter reads.

The letter also reads that “So as to allow a smooth transition from online to physical teaching, the management of the school would kindly request the female students to produce the pregnancy tests certificates by certified doctors at the time of reporting at school.”

“Hope you will all cooperate in the implementation of the policy.” The letter signed by Bhumika Saxena, deputy principal of BLIS reads.

“@BLUELAKESINTER1 is this a joke? What is the purpose of asking for pregnancy tests from girls to go back to school? @Rwanda_Edu kindly clarify if this is even legal or a practice accepted in the education system. Pregnancy shouldnt be a barrier to accessing education for girls!,” argued feminist and activist Chantal Umuhoza on Twitter.

“This kind of practice should be banned along with the suspension of any female students because they are pregnant. And isn’t it ironic that it’s always hard to find any of the “60 percent” speaking on these issues,” Umuhoza said. 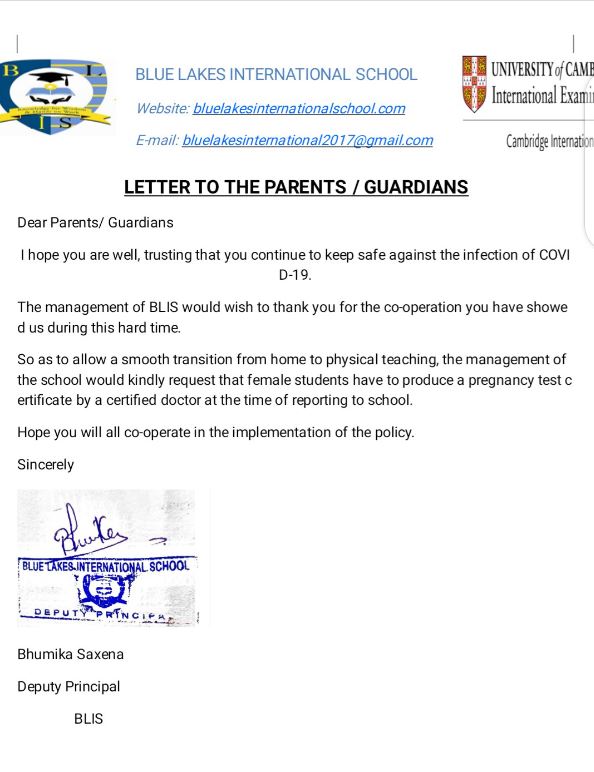 Blue Lakes Required the girls to have negative pregnancy tests.

But others like Dr. Joseph Ryarasa Nkurunziza of Never Again Rwanda were of the view that the test was necessary for the schools for better “planning, management and proper provision of care” while Ely Bukuzagara argued that it is for the safety of girls.

“Our society spares no safe space for teenage mothers in high schools. They won’t be unbothered, embraced and protected. It would be hell for that woman to be mocked by her peers and prolly, highly marginalized by her fellows. This is not just a matter of pregnancy but of safety,” he argued.

However others like Umurungi Cynthia said that the measure does in no way protect the girls but it is rather aimed at denying them their right to education, suggesting that girls should be discriminated against.

“How many schools do you know of that plan for expectant mothers once they ve heard that some students might be pregnant? Do they want to build more rooms or buy better food?” Umurungi asked Nkurunziza.

“Simply let girls be. Leave them alone. Let them learn. Offer help when they request for it. Do not police their bodies or take them through all sorts of emotions. Defend them when they are bullied and punish their aggressors. Educate. That’s how you change a society,” Umurungi said. 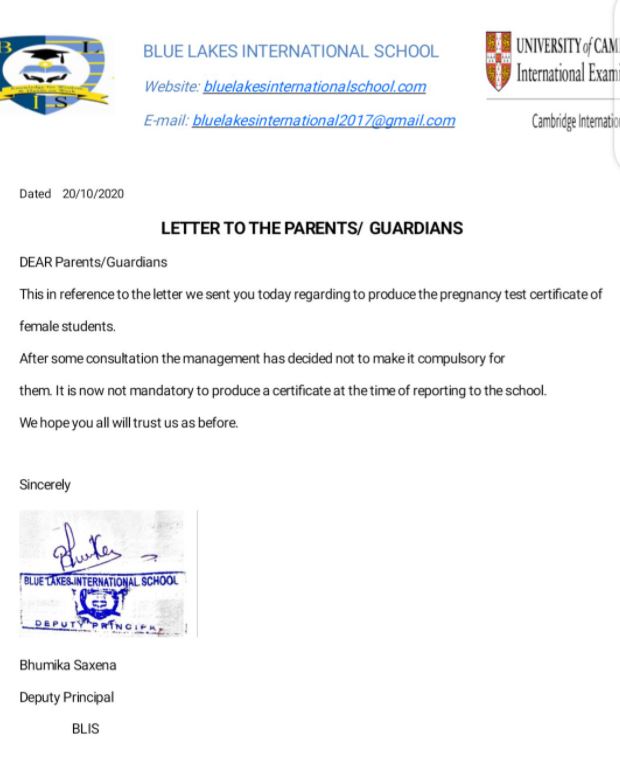 The Bugesera-based school scrapped the requirement.

MINEDUC directive and the school’s mandatory pregnancy test certificates requirement came after early pregnancy cases were reported across the country.

For example, in Gatsibo district, in the Eastern Province, 46 school girls were reported pregnant on 19th October 2020.

Another 170 early pregnancy cases were reported in Rwamagana, also an Eastern Province district in August 2020.

Early this month,  Dr. Valentine Uwamariya, the Minister of Education told the media that they were still gathering the numbers of schoolgirls who were pregnant to make sure that they are sent back to school in due time, but also have the perpetrators face the law.

Schools will officially reopen on 2nd November 2020, after their closure on 16th March 2020 to prevent the spread of New coronavirus.

No Politics Please, We Just Want To Show the Sights