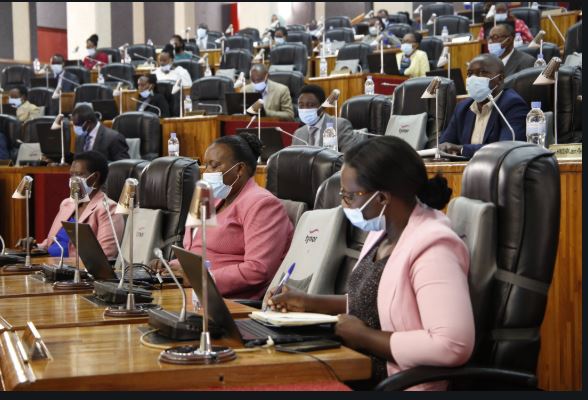 The normal business of plenary sessions, committee meetings at Rwanda parliament starts at 9 AM and close at 6PM.

In the meeting rooms, the parliamentarians sit and meet together to decide on new policies, laws and hear proposals of government officials inside the House.

Physical gatherings at parliament was halted since March 14, 2020, when the first case of the New Coronavirus was recorded in the country and a subsequent total lockdown announced on March 22.

With the Covid-19, parliament had an induced break in the first two months, leading to a change in way of doing business and parliament purchasing new equipment for holding video conference, webex meetings so as to stay on course.

One of the parliament committees – the Public Accounts Committee (PAC) desperately needed this transition. This procedure started with a new committee chair Valens Muhakwa who was elected in June replacing Jean Chrysostome Ngabitsinze.

Muhakwa took over this legacy of a tight job and responsibility at a time when the committee report indicates major misuse of government funds and lack of accountability in tax payer’s money, a job that his predecessors had tried to manage with an iron hand.

Like his predecessors Muhakwa lived to the expectations of the notion of public accountability with his committee almost repeating the same history of throwing out the committee government officials who came unprepared to explain how they used tax payer’s funds.

Some of Muhakwa’s victims include the former Rwanda’s Business Development Fund (BDF) CEO, Innocent Bulindi who at the first appearance in the committee failed to explain why he offered more funds to foreign start-ups than local ones, contrary to the essence of establishment of BDF.

BDF Boss failed to explain discrepancies in policy and procedures, let alone failing to explain how the BDF offered loans without assessment of risks.

Using the power of scrutiny, PAC committee also made some shocking and stunning discoveries. They realized that the Higher Education Council (HEC) had paid for Ghost students with at least Rwf10billion to the Development Bank of Rwanda (BRD) without a list of beneficiaries and details of supporting documents.

Moreover, a sum of $408,486 (equivalent to Rwf363.3million) paid for national park visit permits between August 2018 and January 2019 were swindled by an Irembo Agent who didn’t deposit the funds on RDB accounts, a move discovered a year later.

PAC discovered a new trend in tender procedures where some districts were not able to come up with own written contracts; they just borrowed projects from other districts and implemented them.

Some of these discoveries have led to some government officials getting arrested and set for prosecution, however sources reaching KTPress indicate that a list of more officials involved in mismanagement of government funds is current being investigated and more could be prosecuted in 2021.

This year, parliament amended and passed several bills which affect the lives of common Rwandans and some of them sparked public and media debate.

In June, the Parliament approved establishment of a center for nuclear technology and science, with help of Russia, which will leverage the country to compete in latest technology innovations by 2050.

This was a game changer for Rwandans who normally think that nuclear energy subject was only for countries like Russia and USA.

MPs were concerned about the source of funding, nuclear waste management and how the potential nuclear explosions will be mitigated and how Rwandan will directly benefit.

MP Frank Habineza said he was not convinced that nuclear energy is a deal Rwanda can take on given “its negative impact that overweight the benefits.”

However, MP John Ruku-Rwabyoma insisted that there is no need to be worried since nuclear has evolved in history.

Despite being distracted by Covid-19 cases, Rwandans remain in debate over this move and this is expected to return in 2021.

The parliament also approved ratification of an Africa Union protocol that paves way for a new policy and laws to take care of elderly persons, pensioners and their families through direct government and community support.

“For example on financial support, this new policy will not only financially support the pensioners but even their family that takes care of them, which is different from what we have been doing,” Parliament committee on Unity, Human rights and fight against Genocide said.

The year 2020 was not all ‘bad’ for parliament –it was full of opportunities, debates and ideas that changed the face of the country in many ways.

Rwanda was selected to host the Inter-Parliament Union (IPU) assembly in 2021 in Kigali.

Established in 1889, the IPU is a global organization of national parliaments which empowers parliaments and Members of Parliaments to promote peace, democracy and sustainable development.

Rwanda is one of the 179 national parliaments that make up the current IPU membership and was selected to host the lucrative event during the digital IPU Governing Council meeting from 1 to 4 November 2020.

Mukayijore filled in the gap that was left behind by former MP Ignatienne Nyirarukundo who was appointed to the Ministry of Local Government as Minister of State in charge of social welfare.

The parliament was also this year triggered to debate when it learnt that some civil servants were not in position to take oath on the National Flag due to personal beliefs.

Members of parliament spent three hour of debate on various aspects of the bill determining new functions and regulations guiding the civil services, but more arguments arose over the articles 9 to 13.

For example, the bill stated that a public servant takes oath while holding the national flag with left hand and raising the right hand with a stretched palm or if disabled takes an oath wearing the flag, and if public servant who refuses to take oath, he or she is dismissed from public service.

MPs were not convinced with the limitations in the above articles of which some said was not inclusive and blocking Rwanda as a country opening its boundaries to the rest of the world.

MPs said that with such a modality the law may limit Rwandans with several religious beliefs.

“I think the law should give chance to religious people who may want to join the civil service but because of their religious belief may allow them to take an oath on a flag or religious books,” said MP Suzanne Makayijore.

However MP Eugene Barikana didn’t buy this idea. He said that the constitution would be violated in such a case and thus suggested that the labour commission, which hires government employees, does a pre-assessment of the qualified applicants.

The bill was later passed but it was a memorable moment for parliament to share their perspective on divide in state and religious matters.