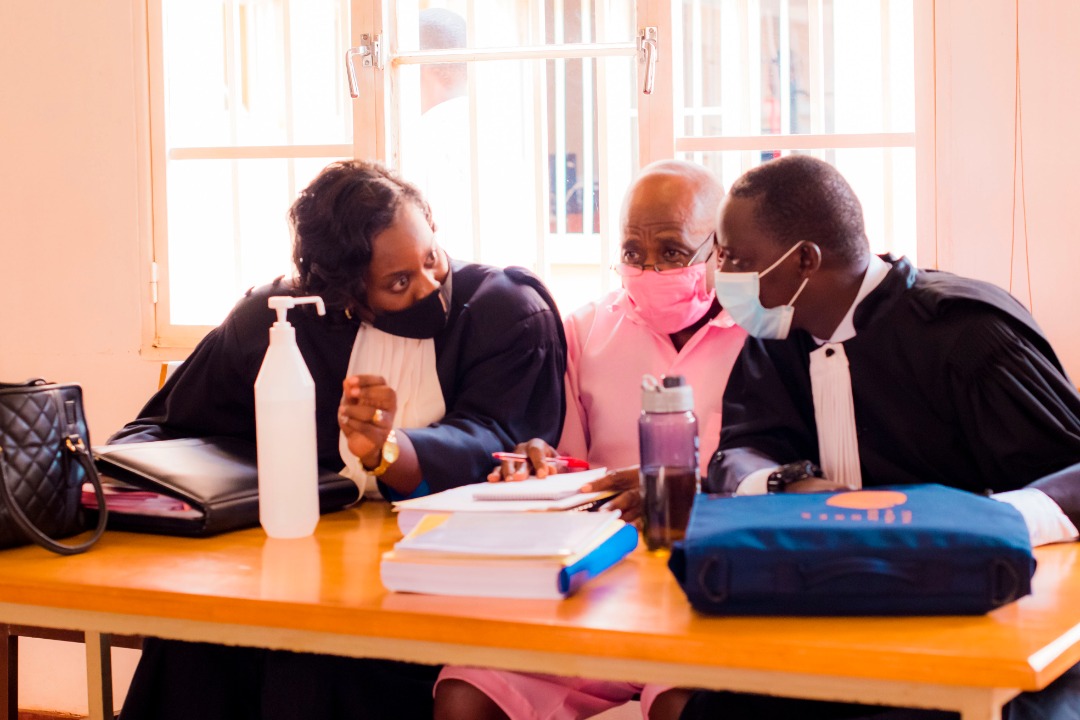 Rusesabagina with his former lawyers David Rugaza and Emeline Nyembo.

The trial in a High Court Chamber for International Crimes was supposed to kick off this Tuesday January 26, 2021 in Nyanza district, involving Paul Rusesabagina and FLN former spokesmen Callixte Nsabimana and Herman Nsengimana, along other 17 FLN recruits who were arrested last year.

All the suspects face similar charges of terrorism attacks on Rwandan soil, arson, murder and formation of illegal armed groups among other, of which prosecution successfully secured court request to have all them stand trial in one court room.

Harrison Mutabazi, the Judicial Spokesperson said: “The joint trial has been postponed because the suspects didn’t get a chance to meet, speak and consult with their lawyers due to current Covid-19 restrictions on movement.”

Mutabazi further said: “It is the right of suspects to have this consultation with their defense attorneys thus the court has set February 17 as the next date for the in-depth hearing. We will communicate more details before this date,” Mutabazi told KTPress in a phone interview this morning.

The suspects are also reported to have asked the court to transfer the trial from Nyanza to Kigali at the Supreme Court building in Kimihurura, which the Judicial Spokesperson confirmed it was granted.

What is expected in February?

Rusasebagina and his lead lawyer Gatera Gashabana, is expected to defend himself against 9 charges, instead of the initial 13 charges Prosecutors had brought forward when he first appeared in court in September last year.

The charges include terrorism, conspiracy to commit and finance terrorism, kidnapping and murder, among other charges.

He is also expected to give evidence that de-links or links him to the FLN group which operated under the support of the armed wing of Rwanda Movement for Democratic Change (MRCD)- a coalition of different political groups operating in DR Congo, and allegedly founded and funded by Rusesabagina.

Basing on earlier evidence provided by self proclaimed Major Nsabimana aka Sankara, court will have to lay ground on linking the criminal charges connecting the three suspects which also will bring in their affiliation to a South African based group- Rwanda National Congress (RNC).

Court will also have to cross examine evidence from Nsabimana’s claims that besides being paid by Rusesabagina, he was also aided by Zambian government to overthrow the Rwandan government.

Court is also expected to hear submissions of Lawyer Yousuf Ndutiye, who represents interests of victims of the attacks manned on Rwandan soil in 2018-2019, that left some dead, property lost among others.

Other suspects in the FLN case include Félicien Nsanzubukire (also known as Fred Irakiza), Anastase Munyaneza, and Jean-Chrétien Ndagijimana, who is a son of the late FLN commander Laurent Ndagijimana, also known as Wilson Irategeka.

Other co-accused were mainly arrested in different operations in DRC between 2018 and 2019.

Bertrand’s CHAN Over Due To Injury