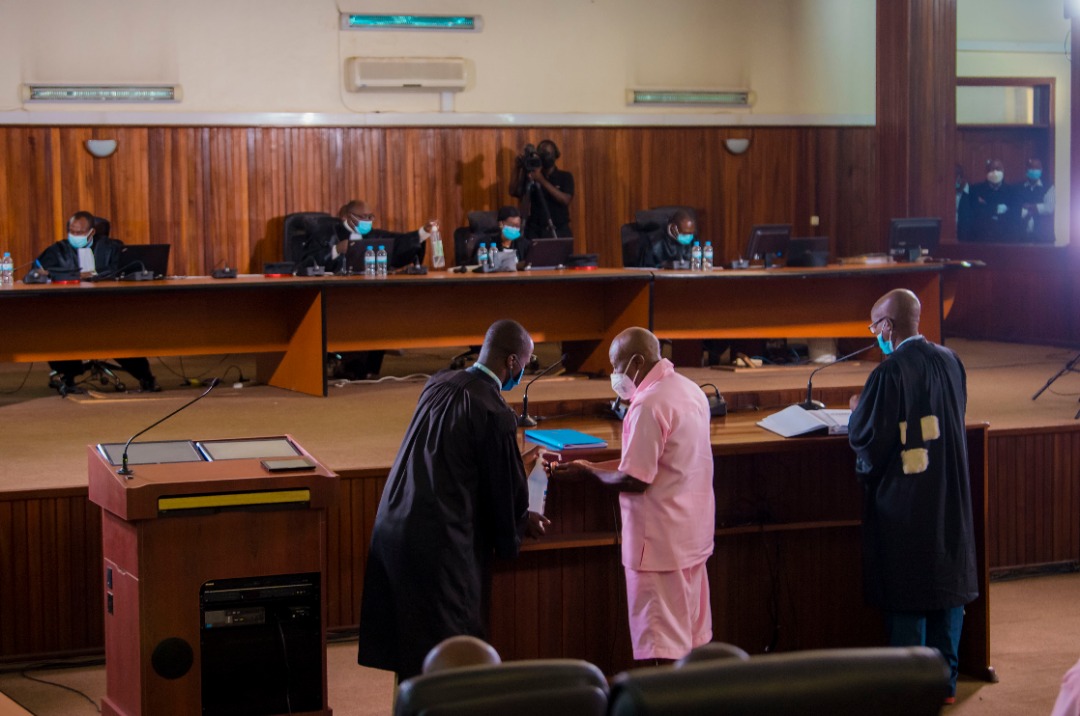 Day one of the terror trial of Hotel Rwanda protagonist Paul Rusesabagina and 20 others, all members of the Rwanda Movement for Democratic Change (MRCD and its armed wing National Liberation Front (FLN), was dominated by deliberations on his nationality and other objections presented by the defence.

Rusesabagina and his co-accused appeared in the High Court Chamber for International and Cross-Border Crimes seating at the Supreme Court premises in Kimihurura, as the substantive hearing kicked off, with objections by Rusesabagina and his lawyer Gatera Gashabana claiming the opening.

Security was tight and the courtroom full as the 21 suspects, who include former FLN Spokespersons Callixte Nsabimana and Herman Nsengimana, Angelina Mukandutiye, the only woman in the case, appeared to answer terror-related charges and other crimes they are suspected of committing between 2018 and 2019, in Rwanda’s Southern Province.

In attendance were Kigali-based diplomats including the U.S Ambassador to Rwanda, Peter Vrooman and others from Belgium, UK, Netherlands and the European Union (EU) as well as Lilian Langford, representing the American Bar Association Center for Human Rights.

The trial opened with the court reading out the profiles of all the suspects in the case and making corrections where necessary.

Rusesabagina, in fluent Kinyarwanda, insisting that he is not a Rwandan by nationality and that he is wrongly detained in Rwanda, an objection which took most of the day as his lawyer Gashabana went back and forth presenting his case.

“I want to repeat it for the fifth time that I am not a Rwandan. I am Belgian,” Rusesabagina said, asking the court to amend his profile to include that he is Belgian, but confirmed all the other details in his biodata, including his parents.

Rusesabagina, who was born on June 15, 1954 confirmed that he is a Thomas Rupfure and Keziah Nyirampara and that he was born in Nyakabungo Cell, Nkomero Sector, Murama Commune, the then Gitarama Prefecture, now Ruhango District in Southern Province.

Court informed the suspects the basis of merging the trials, which was based on the fact that the suspected crimes were committed together, between 2018 and 2019, even though the trials of some of the accused, Nsabimana and Nsengimana, had already made some progress.

Court was also informed that 84 victims of the infamous Nyabimata attacks, which claimed 9 lives and damaged properties worth millions, had filed a case seeking compensation over their losses.

Among those suing is Yusuf Ndutiye, whose car was set ablaze and an unidentified mother, who attended the session with a baby. The Judge’s bench, led by High Court Judge Antoine Muhima, said victims will be given time to articulate their cases.

In order for justice to take its course in a timely manner, the Judge said a roadmap with all the phases of the case will be issued to ensure that there are no further delays in the procedure while all parties were asked to exercise mutual respect for each other during the trial process.

Focus shifted to the issue of the competence of the court, with Rusesabagina and his lawyer emphasizing that the High Court has no jurisdiction to try the case because Rusesabagina is not a Rwandan citizen and that his rights were violated during his arrest.

“I am a Belgian citizen who was kidnapped. I shouldn’t be standing here in this court,” Rusesabagina said, asking his lawyer to expound more. Gashabana said that his client was arrested in Rwanda on August 28, 2020, under unclear circumstances.

It is on the same grounds that Rusesabagina and his lawyer wrote to the High Court to dismiss the case. The Judge informed the duo that Rwandan courts have the jurisdiction to try anyone, Rwandan or Foreigner, as long as they are suspected of committing crimes on Rwandan soil.

Rusesabagina and his lawyer claimed that Rwanda had previously attempted to have him extradited to Rwanda to face charges but Brussels rejected the request on grounds that he was a Belgian citizen.

After lengthy submissions by Rusesabagina and his lawyer, the Judge gave Prosecution a chance to respond to the claims of the defence.

From the onset, Prosecution dismissed objections by Rusesabagina and his lawyer, dwelling on the issue of his nationality and procedure, describing it as an attempt to delay or derail the judicial process. Prosecutors said the issues raised by the defence had been previously ruled on by competent courts during the pre-trial phase.

“As far as we are concerned, both Rwanda and Belgium recognise dual citizenship. He was arrested and charged a Rwandan national with Belgian citizenship,”

“When he acquired Belgian citizenship in 2000, he never filed a document anywhere relinquishing his Rwandan citizenship,” Ruberwa told the court.

Prosecutors gave details of investigations against Rusesabagina dating back to 2010 and cooperation between Rwanda and Belgium on different occasions but extradition was ruled out because as a norm country cannot extradite its own citizen to another country.

However, over the year’s Belgium continued to cooperate with Rwanda to investigate Rusesabagina, obtaining incriminating damning evidence, including money transfer details, which were shared with Rwanda.

Prosecutors further told the court that Belgian cooperation was vital because it helped unearth Rusesabagina’s activities but added that the charges he is facing are not related to the past investigations but rather crimes suspected to have been committed between 2018 and 2019.

The Prosecutor asked the defence to explain why before the Rwandan courts the suspect is not Rwandan by nationality but appropriately calls himself one when it suits the agenda. On this, Rusesabagina explained that will verify how it happened but he had been informed by his lawyers that he needed an address in the region to submit a complaint.

Rusesabagina was also given a chance to expound more on his citizenship background and he said that when he left Rwanda in 1996, he surrendered his National ID card and passport and became a stateless, United Nations citizen.

He said that he was later issued Belgian citizenship and a passport, which he used to travel to Rwanda on two different occasions in 2003 and 2004, as a ‘Belgian’. Prosecution however maintained that Rusesabagina never formally relinquished his Rwandan citizenship.

Even then, the Prosecution said that Rusesabagina’s argument holds no water because even if he was a foreigner and committed crimes on Rwandan soil, he would still be tried over the same.

Nsabimana, alias Sankara, was given an opportunity to say something on the deliberations so far and he told the court that he felt ‘ashamed by the goings on in court because what Rusesabagina was saying was going against whatever they stood for and the cause they had.

“I have been in jail for nearly two years. My wish is for the court to ensure that the trial is fast tracked because most of us want to know our fate,” Nsabimana said, telling the court that Rusesabagina led them as a Rwandan and his mission was to become the President of Rwanda.

“I feel embarrassed by what has happened here today. Mr. Paul Rusesabagina sitting here was our President. When we launched the attacks, his mission was to become the President of Rwanda. However, in court he says he is not a Rwandan. Did he want to be President of a country he was not a citizen?” Nsabimana, who said he was the Vice President of the organisation, told the court.

Pinning Rusesabagina, Nsabimana said that they had set out with a mission but they were later captured and charged but Rusesabagina is now determined to go around in circles denying his role, with the intention of delaying the trial.

Nsabimana’s lawyer, Moïse Nkundabarashi, told court that objections raised by Rusesabagina and his defence were not necessary as they have been ruled off before, expressing concern that they might delay justice for others, especially his client, who had already defended himself against 10 of the charges he faces before the trials were merged.

Rusesabagina’s lawyer attempted to raise more objections before the court but the Judges said that no other issue will be heard until the court rules on the competence of the court.

Judge Muhima adjourned the hearing to February 26, 2021 when a ruling on the objections will be made. Prosecutors also appealed to court to ensure that more objections, if any, be filed beforehand, so that they don’t impede the process next time, otherwise it might confirm fears that Rusesabagina and his defence team are determined to introduce more impediments which will delay the trial for others who are willing to defend themselves against the charges. 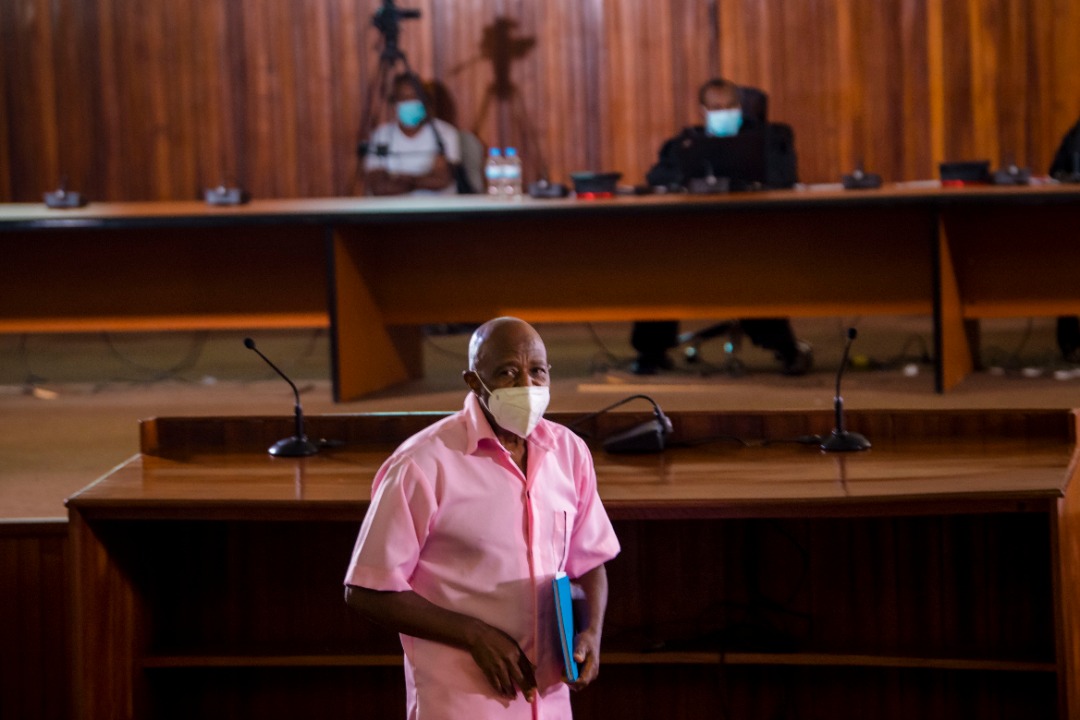 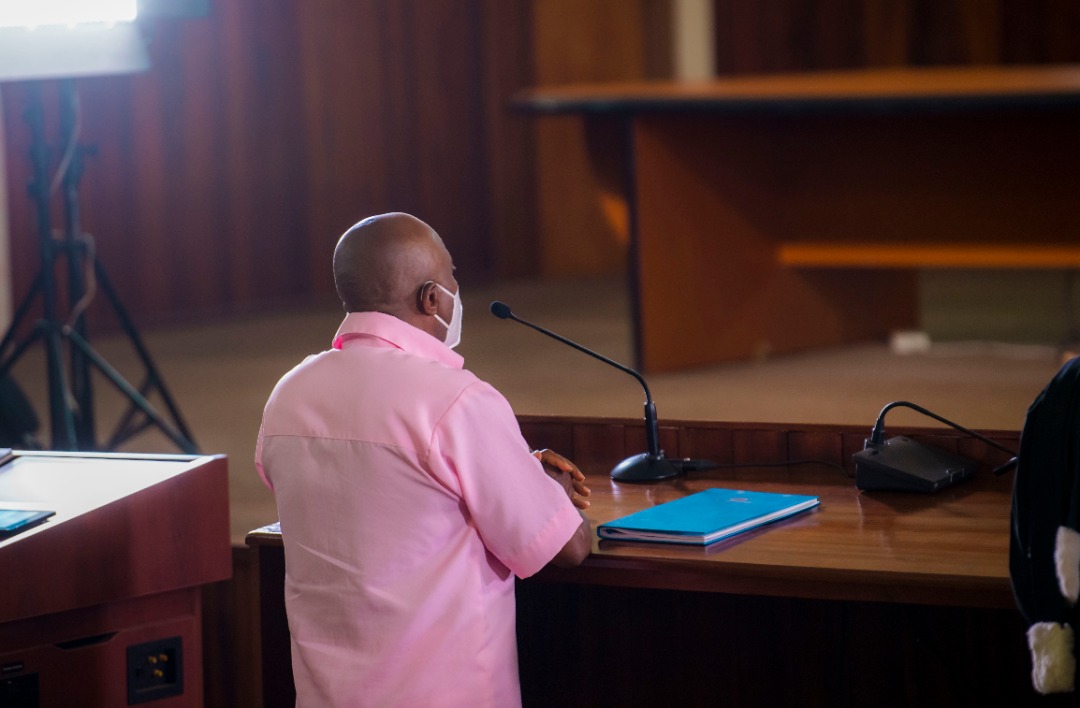 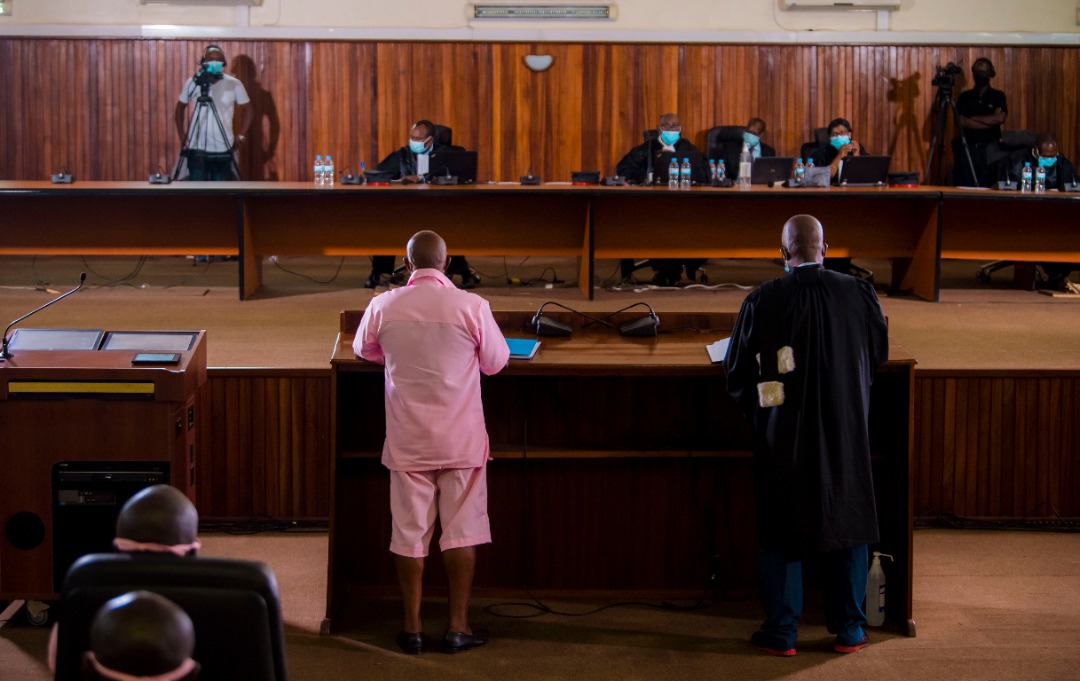 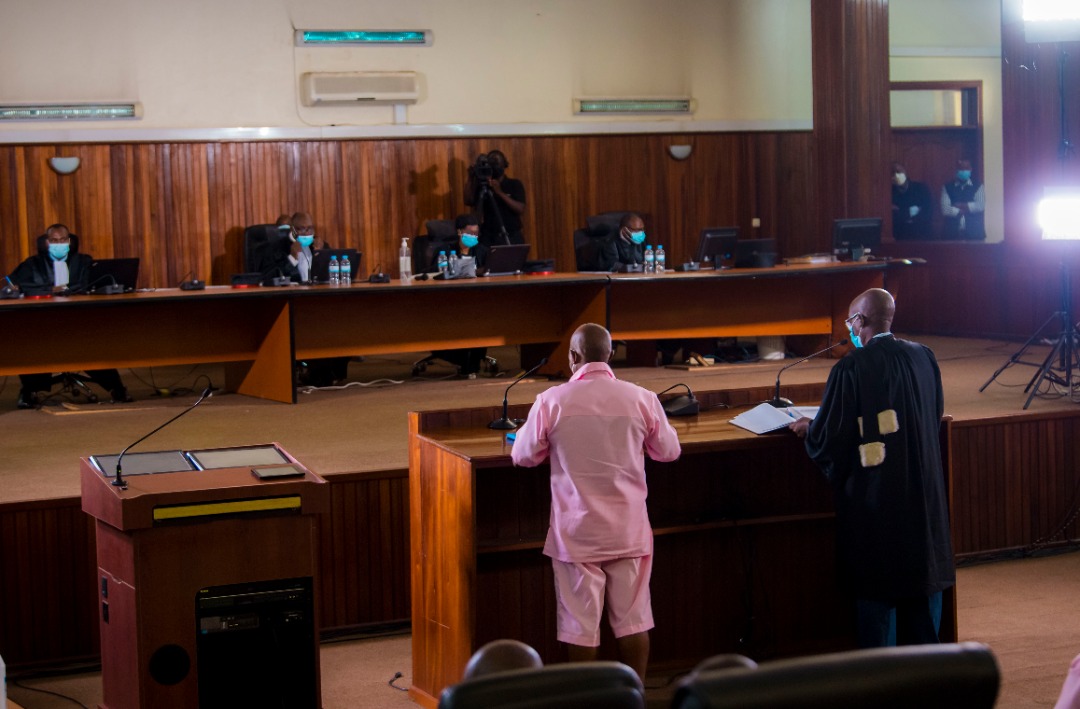 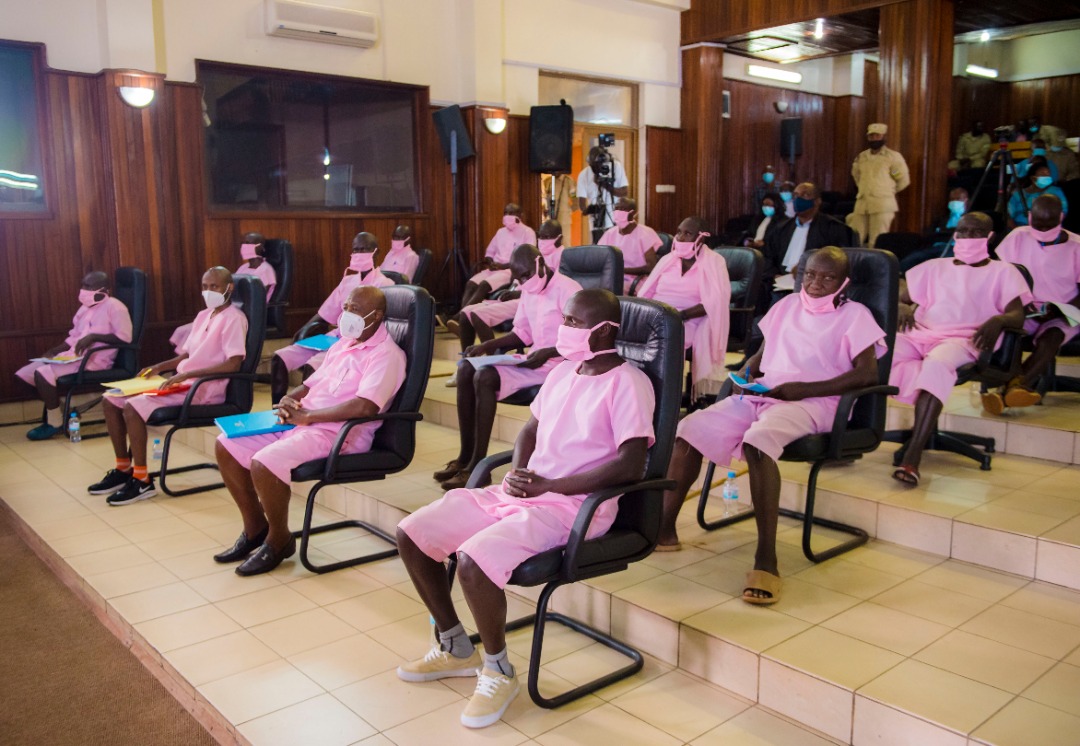 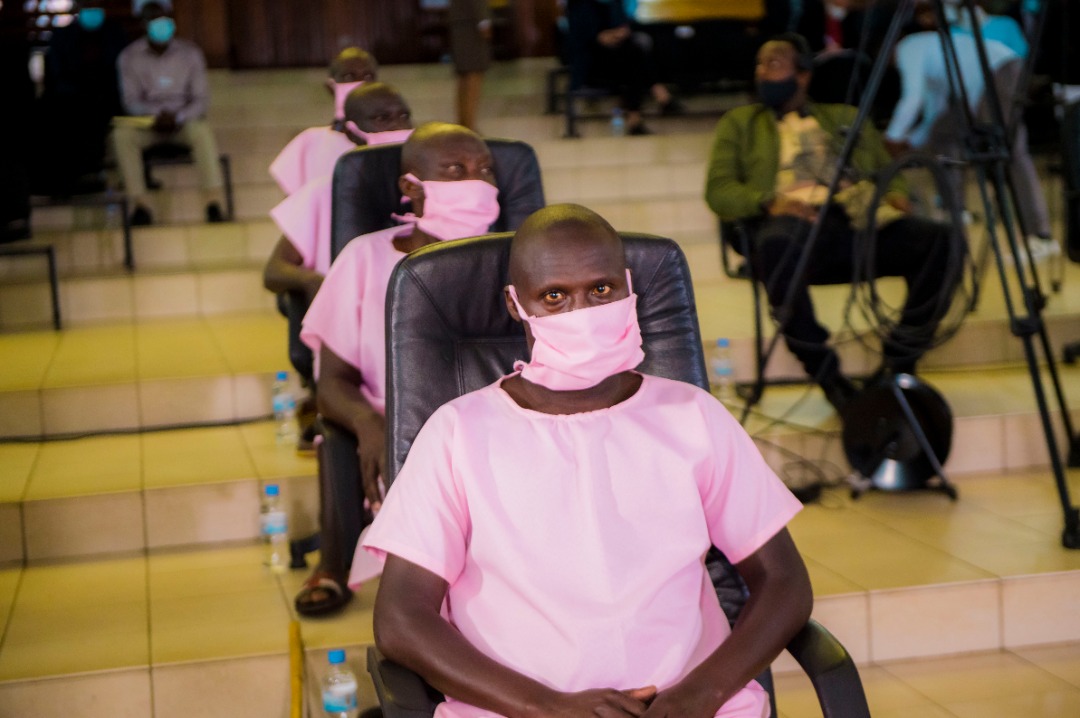