Home NewsNational School Feeding: What Does Your Child Eat At School?
National

School Feeding: What Does Your Child Eat At School? 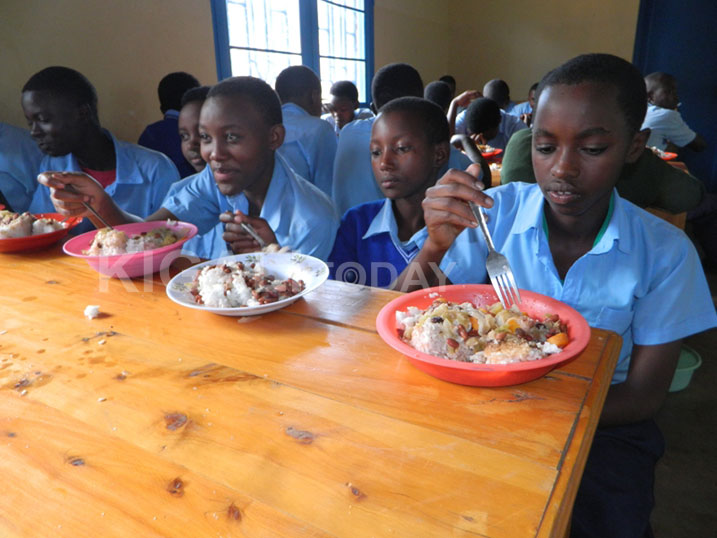 Time check 1:00 pm. The cooks at Kayanga primary and secondary school start transporting saucepans full of rice, beans, and plates to each classroom. Teachers halt lessons and students push their books under desks. It is lunchtime.

As a tradition at this school, two students in each classroom volunteer to lead a short prayer and serve classmates.

Each student in a classroom picks an already served plate and a spoon, one after the other going back to their respective seats to eat until all the members are served.

Located in Gasabo district, Kigali city, Kayanga primary, and secondary school has a population of 2000 students and is among the schools that have integrated the school feeding program that started in 2014.

This national program requires parents to contribute meals for their children to have lunch at school with the government also contributing Rwf56 per student.

“I love eating at school, I don’t spend time traveling back home for lunch which would be tiresome,” Lauben Ujeneza, a senior one student said.

Ujeneza said that he does not miss lessons because lunch is provided at school.

However, with a population of 2000 students, Kayanga school feeds only 120 Ordinary level students who remain at school until 5 PM, but 1,880 primary students go back to their homes for lunch.

“At 11:40 am primary students are released to go back home for lunch. Currently, the school feeding program caters for secondary students. However, primary students will also start eating at school through the World Food Program (WFP) partnership that will last for five years, starting October this year,” Clemence Nahayo, headteacher of Kayanga primary and the secondary school said.

Nahayo said that the target is having all Kayanga students benefit from the school feeding program and they are currently working with the WFP and the ministry of education to achieve this target.

According to Nahayo, students balance their diet by eating rice, cassava, sweet potatoes, and sauce that includes cabbages and beans grown in the school garden.

Among the 120 secondary students who are provided with lunch at school, only 70% of their parents contribute food, 30% of the parents have refused.

At this school. every parent pays Rwf12000 per student for lunch while the Ministry of Education raises half this amount  – Rwf 6,720 per term, according to Nahayo.

“All students are provided with lunch, whether parents contributed food or not. We try to avoid conditions where a student can feel inferior and dropout. But the campaign to have all parents contribute food continues through the Parent’s Teacher’s Association (PTA),” Nahayo said.

Nahayo said that the school administration and the PTA are planning to conduct a door-to-door campaign sensitizing parents on the benefits of the school feeding program, putting out that some parents have the potential, but have adamantly refused to contribute food.

The headteacher of Kayanga made the remarks during the Africa Day for School Feeding celebration that was instituted by the Assembly of Heads of States and Governments during the 26th African Union Summit in 2016.

To celebrate Africa Day for School Feeding, the ministry of education, Kayanga teachers, and WFP officials planted ten Avocado and orange fruits in the school compound as part of the national campaign to plant fruit trees and vegetables and improving school feeding.

Celebrated on 1 March annually, African Day of School Feeding (ADSF) this year was marked by the theme “Harnessing Africa’s traditional knowledge and food to support home-grown school feeding Programs and systems during COVID-19 Response and beyond.”

In Rwanda, Gaspard Twagirayezu, Minister of State in Ministry of Education in charge of Primary and Secondary Education, and Inka Himanen, school feeding program manager at WFP traveled about 30 kilometers from education ministry headquarters to Kayanga school to plant fruit trees and vegetables.

“Each school should take advantage of the most available foodstuff in their area to feed children. However, parents are reminded that feeding children is their responsibility,” Twagirayezu said. 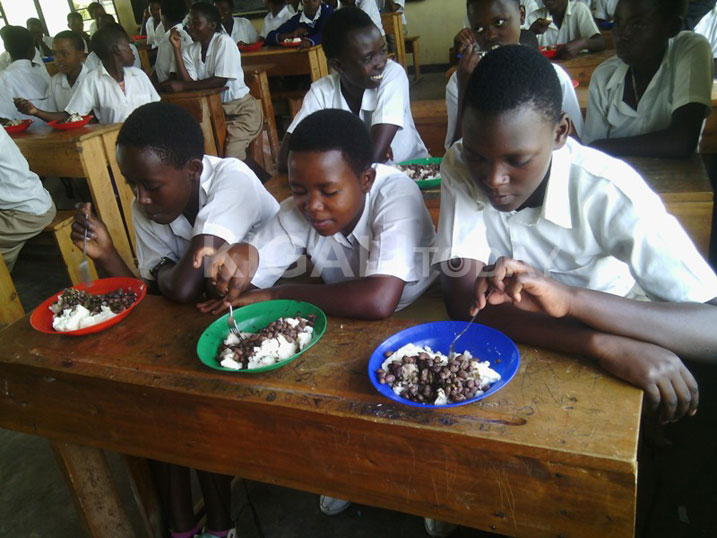 Twagirayezu said that over 2000 school kitchens are under construction and will be completed soon to facilitate the integration of school feeding program across the country.

“The school feeding policy has not yet covered all students and schools, but that is the target, there are basic infrastructures that should be completed first including constructing kitchens,” Twagirayezu said.

Without mentioning the exact time when the school feeding program will be integrated into all schools, Twagirayezu said that the government is working hard to make sure that all students start eating lunch at school soon.

So far the school feeding program is already working in 600 primary and secondary schools with officials encouraging schools to feed students with the most available food in their communities.

The government says it targets to feed 3.3million children in both primary and secondary schools.

In December 2020, Edouard Ngirente, Prime Minister while briefing the parliamentarians said the government was planning to spend about Rwf38 billion on the programme annually.

So far, the government has partnered with WFP that has committed to injecting $25million to support 135 primary and secondary schools in feeding programs across the country.

“We shall increase the number of schools that we support from 108 to 135 schools,” Inka said.

Inka added that the WFP will continue to support the government on the school feeding program and other related infrastructure including the construction of kitchens.

UNIRMCT: No Early Release for Bagosora