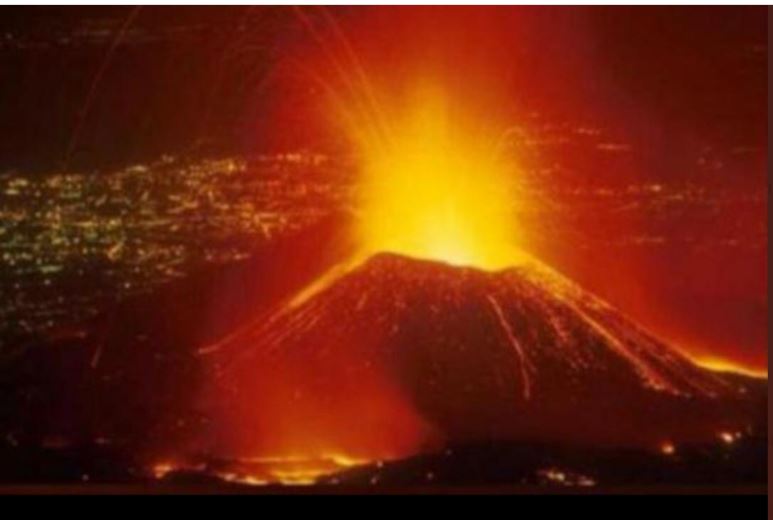 A week since she poured burning molten rock from deep within her belly, inhabitants of the city of Goma, in the Eastern Democrtic Republic of Congo (DRC), and their neighbours, across the border in Rwanda, are still casting anxious glances towards Nyiragongo volcano.

In 2002, Nyiragongo’s eruption left 250 people dead, and a devastated city in her wake. In comparison, last Saturday was a mere hiccup.

Even this relatively minor tantrum however, has been enough to cause an estimated thirty-two deaths so far, send thousands fleeing, as lava engulfed seventeen villages in its path.

Mercifully, this time, the lava flow stopped short of the city itself, but perhaps remembering the devastation of 2002, the DRC government ordered a partial evacuation of Goma.

Like all the other eight volcanoes in what is now called the Virunga, a corruption of ibirunga, the Kinyarwanda word for volcanoes, Nyiragongo is named in Kinyarwanda. And it is to Rwanda that people fled her eruption, the heat at their backs harrying them to run helter-skelter, for their lives.

Although manned twenty-four hours a day, the Gisenyi-Goma border point closes at night, and those fleeing to Rwanda, initially found their entry barred. The border was however quickly opened, as soon as officials realised what was happening.

The world’s attention was naturally focused on the main Gisenyi-Goma border crossing, but large numbers of people crossed wherever they could. 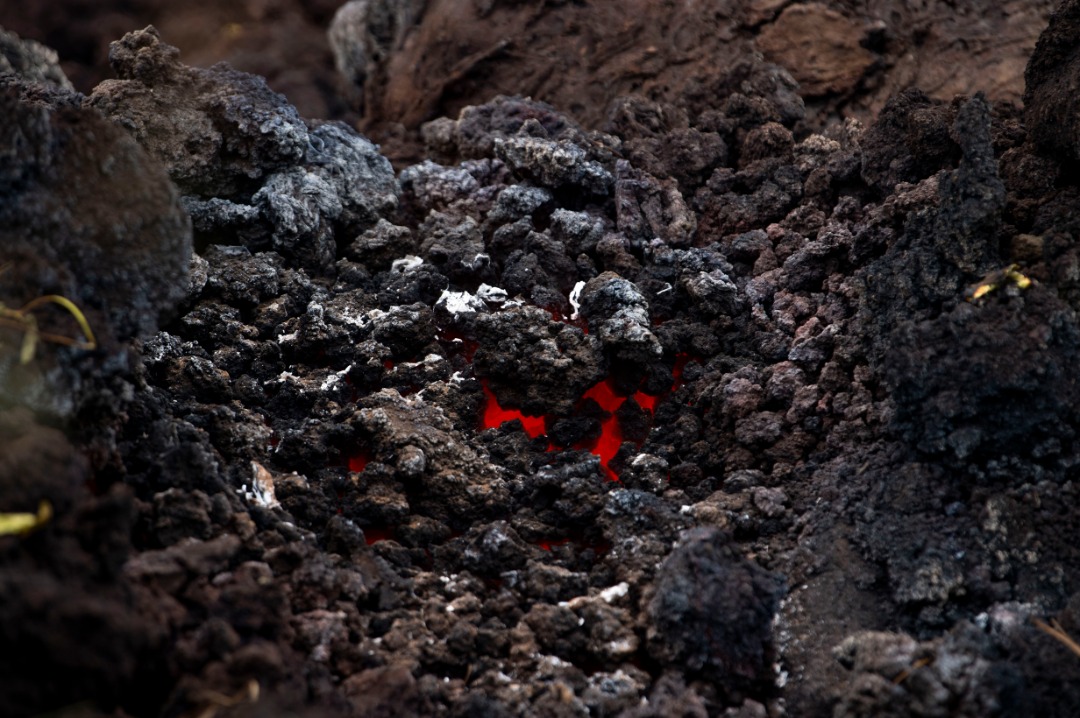 Busasamana in the Rwanda district of Rubavu, is under the long shadow of Nyiragongo. Inhabitants of the area have lived in close proximity with their neighbours across the border in the DRC for generations. Intermarriages mean that many families on either side of the dividing line, have family members in both countries.

“On Saturday, 6.50pm” explained local government technical adviser, Etienne Mvano, “we heard a big explosion, the sky filled with sparks. Naturally, we went to investigate, and we realised of course, that it was another eruption from Nyiragongo. Within fourty minutes, we had received the first group of fleeing people. Nearly 700 arriving that night.”

If Rwanda officials were surprised, it was panicked terror for the people they were preparing to receive.

Bizimana Nyumbakumi, in his sixties, was among three hundred or so, who after Saturday’s eruption, had decided to return to their homes in the DRC, only to rush back to Rwanda, this time, in fear of earthquakes.

“On Saturday” he recalls,” we were just getting ready for our evening meal, when suddenly, we heard boom. The sky was all fire. Everyone just ran. We could feel the heat on our backs. We were running in the dark, those with young children carrying them, people falling, many sustained injuries, and are being treated in Rwanda.”

“It was a relief when we saw the Rwandans directing us where to go, as we arrived. We were really well received, they helped us with the children, food, drink, and showed us where we would spend the night. We really have to thank them, whatever we needed was provided.”

Touring the affected area in Rubavu, the Rwanda minister for local government, Jean Marie Vianney Gatabazi, was confident in the country’s capacity to cope with any challenges coming with the spill over from Nyiragongo. And he expressed satisfaction with the cooperation between Rwanda the DRC authorities.

In an area prone to earthquakes, given its proximity to the Virunga mountains, the minister was keen to assure residents that any support needed would be available.

“The regional health authorities were at hand for anyone who needed them, and many did, including one woman who gave birth on the way to us. Children separated from their parents as people fled in the dark, are now reunited. We cannot know how things might change of course, but here in Gisenyi, we have a disaster management plan in place, in case of earthquakes.”

Many, like Prisca Turayisenga, a farmer in Busesamana, will need help in the coming months.

Gesturing to what until last Saturday was her two acre farm, now covered in a still smouldering thick layer of lava, she appealed to her local government leadership for support.

“This is all we had. Everything came from here. Our food, money for the children’s school uniforms and books. I don’t how we can ever farm here again, do you?” She asked hopefully. 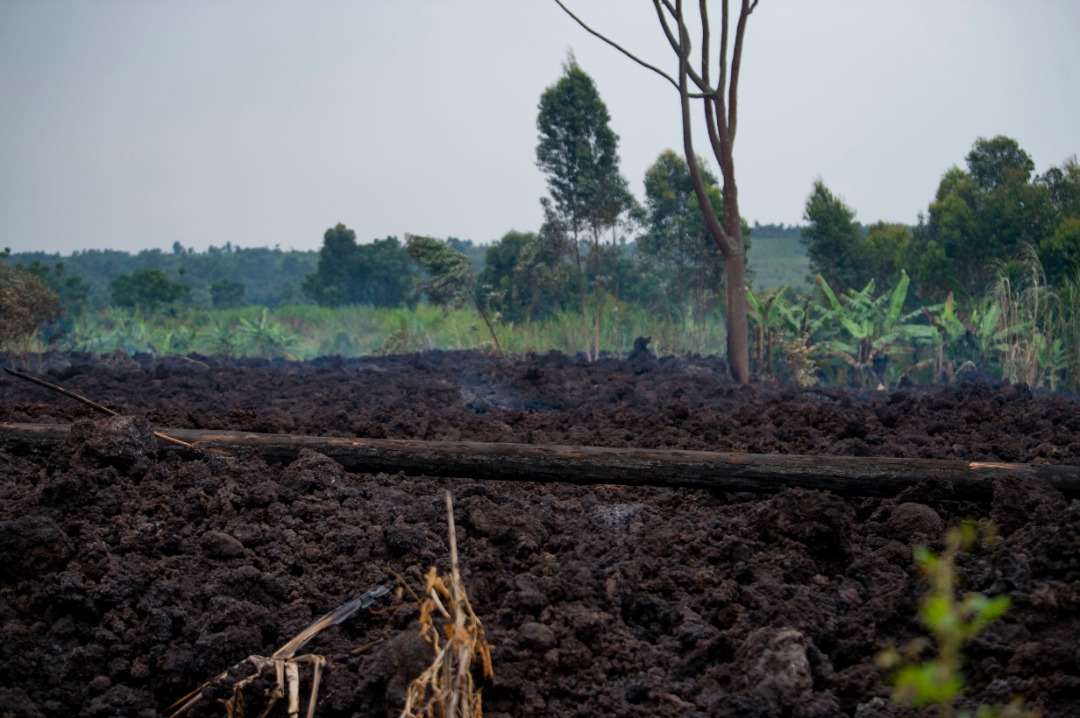 As they responded to the humanitarian need, the Rwandans also kept a wary eye on the security situation.

Eastern DRC has been plagued by armed groups, since the Rwandan genocidal army fled there, in 1994, adding to home grown gangs, and others from neighbouring countries.

As they welcomed the ordinary men, women and children, fleeing Nyiragongo’s eruption, security personnel were alert to likely infiltration by any of the armed groups targeting Rwanda from the DRC.

And then there is the Covid-19 threat. Rwanda’s response to the Coronavirus pandemic has been hailed as one of the best in the world, by among others, the World Health Organisation (WHO). The same cannot be said of the country’s neighbours.

With words clearly intended to sooth and re-assure, Vice May of Rubavu, Pacifique ishimwe, persuaded the reluctant visitors to don the face masks that would be provided to them.

“We know you are anxious to return home, but in the meantime, feel welcome. We are here to see to all your needs, for the short space of time that you are going to be here.”

“We have guidelines to prevent the spread of Covid-19, and over the few days that you are here, please do listen and follow those guidelines. You will all be tested for Covid-19, face masks will be brought for you.”

Only Nyiragongo knows when the Banyekongo, as they are known in Rwanda, will be able to return home. For the moment, she is keeping everyone guessing.

As well as a possible second eruption, the main fear, primarily for Goma and its environs, but also for Gisenyi, across the border in Rwanda, is the continuing aftershocks.

There have now been upwards of 200 earthquakes, following the eruption last Saturday. Tremors have been felt in Rwanda’s capital Kigali, sixty-five miles away from the volcano itself.

According to the Rwanda Seismic Monitor, the strongest earthquake was measured at a magnitude of 5.3. A magnitude of 6 and under is expected to cause relatively slight damage. 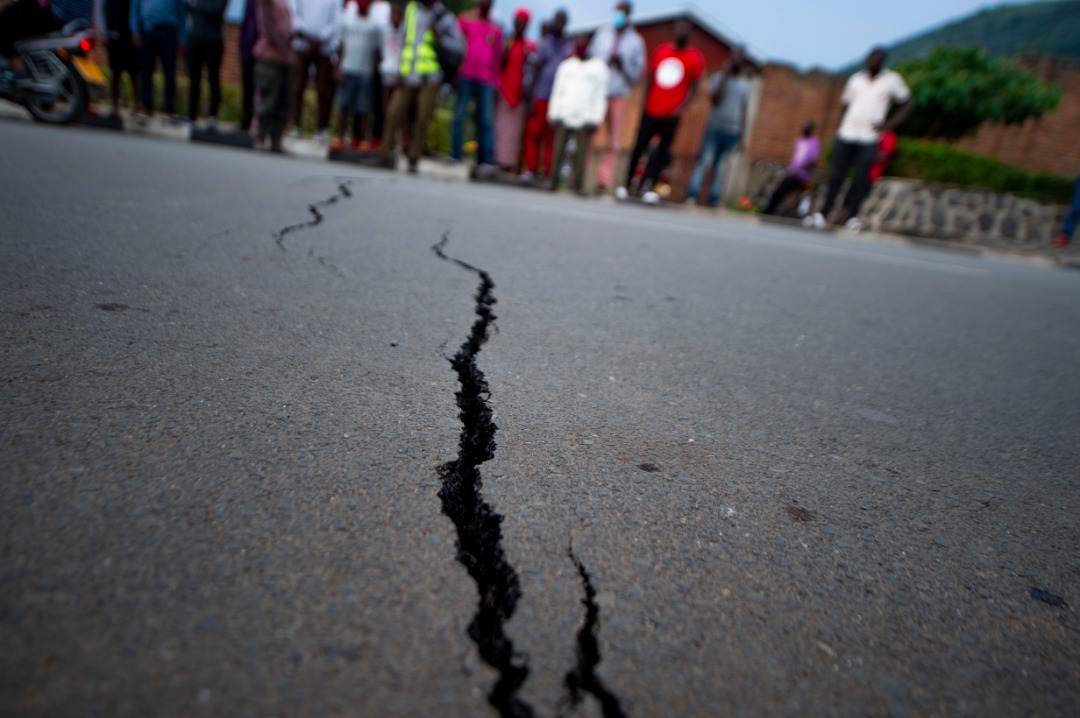 But, tens of houses were damaged in Gisenyi, with people opting to sleep outside, anxious that their homes might come down on top of them as they slept.

The city’s main hospital had to move some patients, initially from some damaged buildings, and as the earth tremors continued, and intensified, to the sister hospital in nearby Musanze.

Other infrastructure damage included deep tears in the ground, including through Gisenyi airport, and the main highway to the rest of the country. Several buildings will need to be buttressed, or demolished altogether, and rebuilt.

The damage is at its worst in Goma, of course. As well as damage to infrastructure, like road networks, power stations, and water supply, a thousand houses, and three medical centres, are believed to be among the 2,500 buildings that have been destroyed, with several more sustaining damage.

People are complaining about lack of information. The Goma Volcanic Observatory (GVO) has not functioned properly for some time, following allegations of financial mismanagement, and corruption.

Several scientists, notably from Italy’s National Institute of Geophysics and Volcanology (INGV), are expected to arrive to support the GVO in assessing the Volcano’s behaviour in the next few weeks.

Until reliable data is obtained, there remains only conjecture, based on available scientific knowledge about volcanoes, rather than specific research about this latest eruption.

What for instance, might the earthquakes presage? Could the cracks caused by them in both Goma and Gisenyi, be an indication that magma is accumulating underground, and might lead to a further eruption?

Did the lava lake drain entirely with the last eruption, or was it only partially drained? If it was fully drained, is it refilling? Or are the earthquakes the normal readjusting of the tectonic plates after the eruption, in which case then, there is little to worry about until the next time. 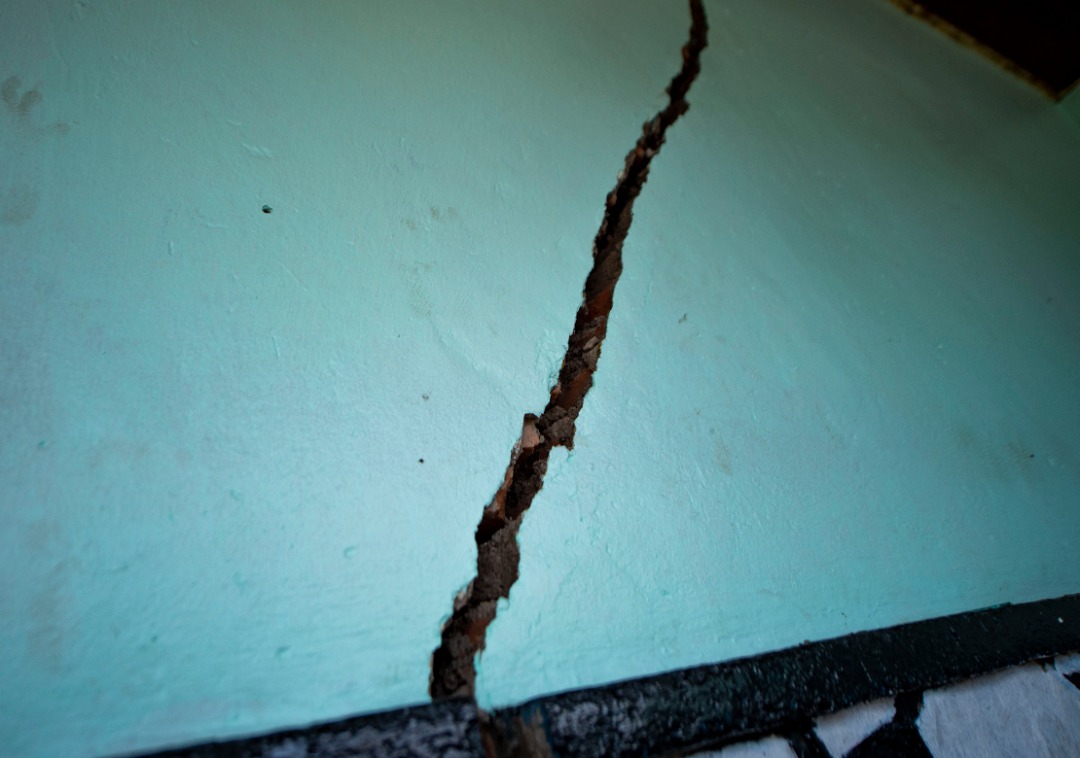 Until more accurate information is available, the situation remains unpredictable, although it does seem as if activity, including earth tremors are subsiding.

The worst case scenario, is that a further eruption would open fractures on Nyiragongo’s southern flank, actually in the city of Goma, or inside Lake Kivu, or both, in the city and inside the lake.

This would devastate parts of Goma, and Gisenyi. The heat from the lava would also cause disastrous overturning of the lake, the so called limnic eruption, in which large quantities of deadly Carbon dioxide (CO2) gases would be released, causing possible several thousand deaths.

It should be emphasised however, that like other scenarios, this worst case scenario is not supported by data. And most importantly, it is also believed to be the least likely. 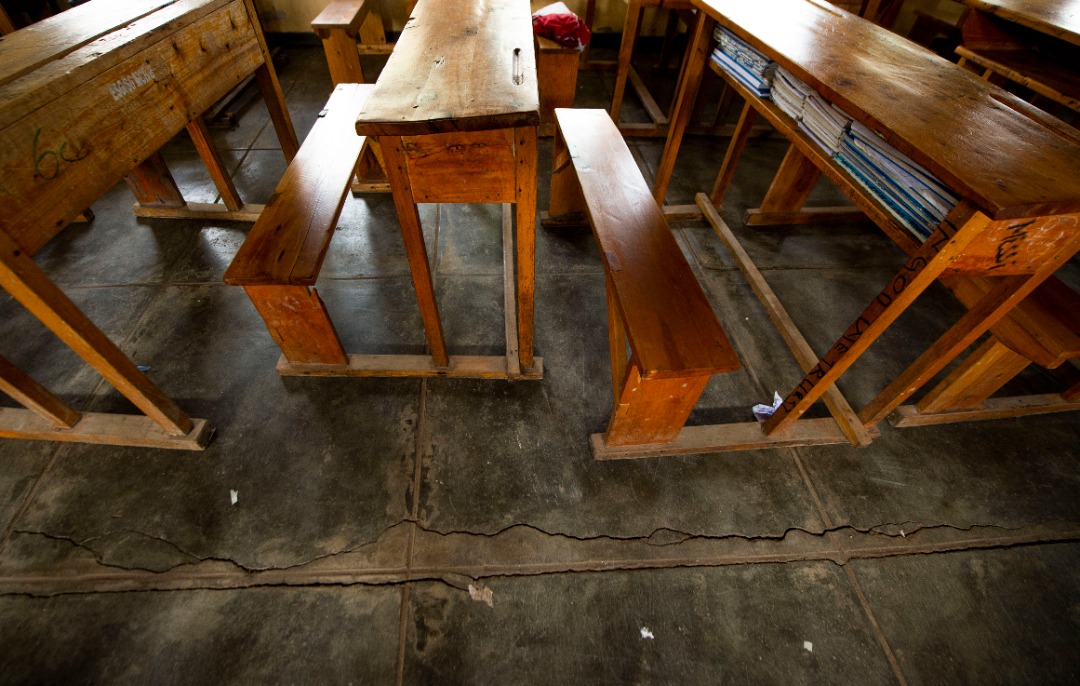 It is however a reminder of why Nyirangongo is regarded as the most dangerous volcano in the world, as its most recent eruptions attest.

The 2002 eruption killed 250 people, 400 according to some estimates. Tens of thousands were left homeless, most fleeing to neighbouring Rwanda, as lava covered more than 13% of the city.

An even deadlier eruption in 1977, left more than 600 dead. The fluid texture of Nyiragongo’s lava allows little time to escape its flow. The 1977 lava flow was measured at speeds of sixty kilometres per hour, the fastest ever recorded of any volcano.

With lava at temperatures of 700 and 1,250 degrees Celsius, moving at such speed, Nyiragongo’s eruptions are an especially terrifying, deadly force.