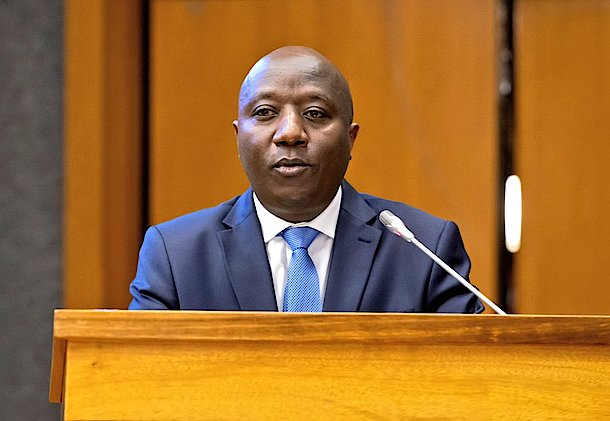 The PM, Dr. Ngirente in a previous appearance in Parliament.

The Prime Minister, Dr. Édouard Ngirente, says the government has finalized plans to upgrade and add value to Technical and Vocational Education and Training (TVET), which is considered a key pillar for socio-economic development.

The development is part of the government initiative to move towards a hands-on and competence-based curricula, to produce skilled graduates fit for the current labour market demands.

Dr. Ngirente pointed out that quality education is essential for any country’s development and most especially, technical and vocational training, which has been recognized as a pillar for development in advanced countries like Germany and Switzerland.

The Premier made the revelation during the presentation to Parliament in the joint sitting of the Senate and Chamber of Deputies on what the Government is doing to promote TVET and Polytechnics, on Thursday 22.

“The example we should all agree on is German which is well known for vocational skills. Over 50% of their population, youth, and adults join TVET schools. This helps them to create their jobs and eventually combat unemployment,” Dr. Ngirente explained.

The PM said that as part of efforts to add value and upgrade technical and vocational training, the government is planning to start awarding TVET students with Bachelor’s and Master’s degrees in technology in a bid to promote high-caliber vocational professionals across the country.

The Bachelor’s degree will be awarded to a student after completing the next level after graduating from the Integrated Polytechnic Regional Center (IPRC).

The Masters in Technology award, it will be awarded to students after finishing a bachelor’s degree at the IPRCs undergraduate level.

“We shall continue to care for the trainers in vocational schools, just like other teachers in the basic education system, they will be given equal advantages.  Those willing to study as TVET trainers will be awarded scholarships, just like students who are pursuing studies at Teacher’s Training Colleges (TTCs) to teach primary schools and those pursuing to be professionals in teaching secondary school at the University of Rwanda campuses,” Dr. Ngirente noted.

“The teachers who teach in TVET schools are those that graduated in Rwanda Polytechnic schools, those who will decide to be trained further as Vocational trainers will be given government scholarships to pursue studies in teaching, however,” Dr. Ngirente explained.

Benchmarking from the best

According to Ngirente, the government is working hard to make sure that students in TVET schools are equipped with skills that are required in the labour market, as it is done in developed countries which prioritize technical and vocational training.

“The idea is that students can develop themselves and generally the state. In Germany, 30% of student’s skills are learned in schools and 70% from industry attachments. This helps a student to graduate with the required skills,”

“Another example we can refer to is Switzerland, which developed through the same path. 69% of their young people and adults join TVET schools. Other examples are Singapore, China among developed states,” he pointed out.

According to Dr. Ngirente, training youth and adult vocational skills is one of the reasons why developed countries have low unemployment rates.

As of today, 31% of the students who graduate from the Ordinary Level (Senior Three) join TVET schools, but the government targets increasing intake to 60% t by 2024.

According to the National Strategy for Transformation (NST1), TVET schools are seen as crucial in helping many Rwandans, especially the youth, acquire employable skills, and create their jobs.

The technical skills reportedly have an important role in attaining increased output, reducing unemployment and poverty, as well as enhancing social development in Rwanda.

Thus, the government’s pledged support to create a comprehensive system that will guide the TVET training in Rwanda to ensure the effectiveness of our intervention while sustaining the results in the long term

According to Dr. Ngirente, the government will make sure that at least 56 vocational schools dubbed “TVET wings” are constructed in secondary school premises every fiscal year across the country.

“We established TVET wings that are built-in school premises, the students from the ordinary level will have the choice to either continue with basic education or join vocational skills that are built in the same school. The TVET wings will have workshop departments for pieces of training and practical lessons,” Dr. Ngirente noted.

According, Dr. Ngirente, the school leaders will be controlling and managing schools and TVET wings that will be built inside the school premises. He pointed out that the difference will be teachers; some for TVET wings and others teaching basic education.

“This is the best way of extending vocational schools to communities and building many at cheapest prices,” Dr. Ngirente said.

According to the available figures from the Ministry of Education, 10,000 students joined TVET schools in 2017.

So far, the government has built 81 TVET wings, according to Dr. Ngirente.

“The TVET image has changed, even the university graduates have started applying to join the vocational school’s skills. We don’t deny them chances, they are allowed to get these skills. All Rwandans should have skills in various activities that they can do in the future,” Dr. Ngirente said.

To lower the costs of TVET school fees and improve the quality of learning, the government has taken over the responsibility of buying required learning materials also known as ‘consumables’ that had reportedly burdened students and parents for a long period.

In a bid to solve the frequently reported high costs of buying consumables, the government has finished including consumable costs in the fiscal budgets to simplify the teaching of students.

“We have included costs of buying consumables for TVET schools in the following fiscal budgets and we have started buying some of them. The problem of schools asking consumable fees from students and parents, that has been solved,” Ngirente said.

He pointed out that the TVET consumable fees should be counted on the government, not the parents of students.

According to Dr. Ngirente, the existing challenges of promoting and paying arrears for TVET trainers will also be sorted in a few months from today.