President Paul Kagame is among the millions of Arsenal FC fans around the world who are happy following the superb performance the North London club exhibited against rivals, Tottenham Hotspurs, on Sunday, in a 3-1 win.

President Kagame took to Twitter to express how he felt about the win, giving credit to the team and management for rallying themselves back to winning ways, following a shaky start to the season.

“Credit to where it is due…Congrats Arsenal, manager, players and greatly… fans!!! Everything came very much alive today. All the best [in] every game…#Brilliant!!” President Kagame tweeted after the game which restored some hope among Arsenal fans.

Kagame, who earlier this month revealed that he has supported Arsenal for more than three decades, has been one of the critics of the club in recent years, citing the lack of ambition and desire to compete at the top level as a major disappointment to fans.

The North London side compounded the problems of Spurs and manager Nuno Espirito Santo, who in recent weeks have been under scrutiny due to poor results. An electrifying first half performance ensured that Espirito Santo and his charges continued to face questions after the North London derby loss.

Emile Smith Rowe kicked off the celebrations for a packed Emirates Stadium when he arrived unmarked to sweep home Bukayo Saka’s cross after 12 minutes before he turned provider as Pierre-Emerick Aubameyang got the second goal midway through the half. 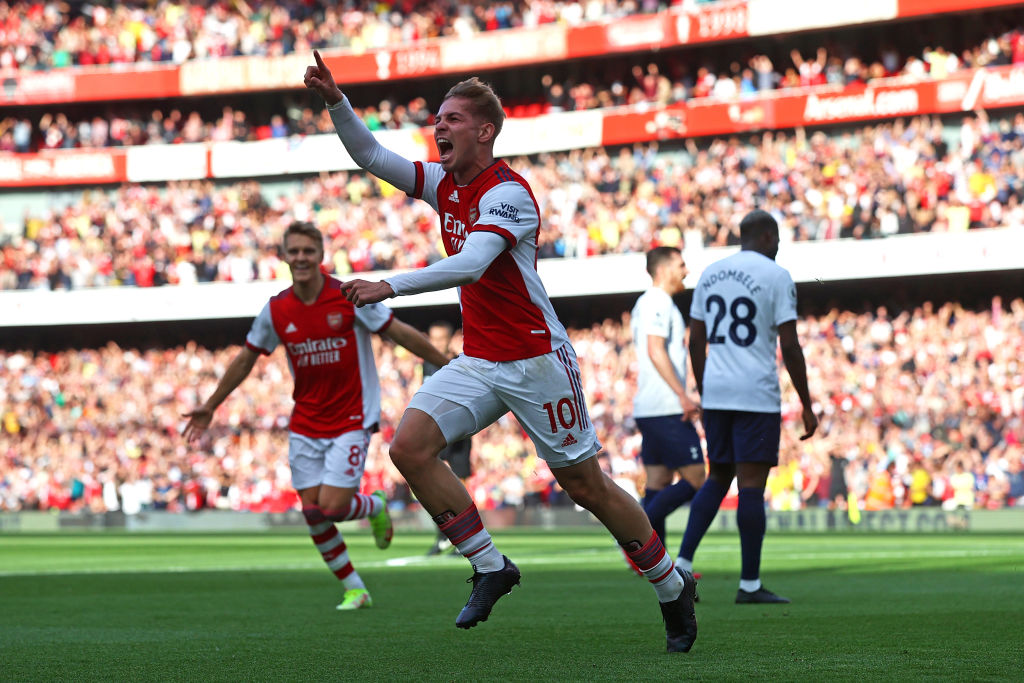 Emile Smith- Rowe was in superb form against Spurs.

The game marked yet a poor display for Spur’s forward Harry Kane who is yet to find the net this season, missing several chances, before Bukayo Saka put in a third goal for Arsenal with a calm finish.

The second half saw Spurs improve, with Kane getting a good save out of Aaron Ramsdale before Son Heung-min pulled one back. Ramsdale was back in action with yet another major save, tipping Lucas Moura’s shot onto the crossbar, in what could have been a superb second for Spurs, leading to a tense finish.

There could be no better way for an Arsenal resurgence than beating archrivals in the presence of legends like Thierry Henry. Manager Mikel Arteta celebrated like a relieved man, thanks to the brilliance and exuberance of  youngsters Saka, 20,  Smith Rowe, 21, and Martin Odegaard, 22.

New signing Takehiro Tomiyasu yet again proved his versatility in defence, starting alongside Ben White, Kieran Tierney and Gabriel Magalhaes, in a defensive partnership that proved hard for Spurs to crack, while Ramsdale, also a new new signing, proved that he is now the no.1 choice, ahead of Bernd Leno.