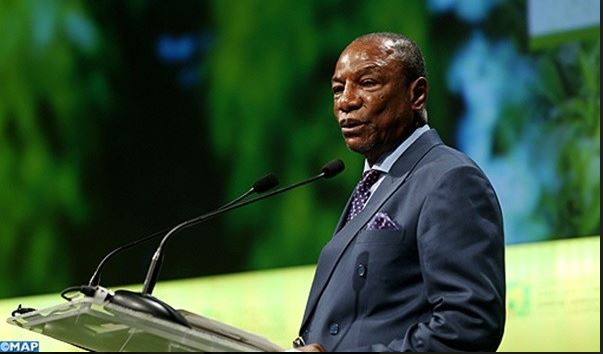 Guinea has been thrown in confusion and uncertainty, after an attempted coup by military officers, with the country’s defence ministry countering that the coup plotters had been repulsed.

Early Sunday morning, gunfire was heard around the Presidential palace, in the Guinean capital of Conakry.

In the following hours, a video showing soldiers in the Presidential palace, surrounding President Alpha Conde, begun to circulate on the internet.

In the video, the 83 year old head of state is sat on the sofa, stony faced, but apparently quite relaxed. He is dressed in an open shirt and jeans, and is bear footed. He regards the soldiers with an expression of defiant, near derision. Whatever his fate might be, it does not seem to trouble him.

The coup, or attempted coup, is reported to be headed by Colonel Mamady Doumbouya, a member of the country’s special forces.

Draped in the national flag, of red, gold, and green, and surrounded by heavily armed comrades, Doumbouya went on state television, to announce the takeover of the country, by his group, already named the National Committee for Reconciliation and Development.

“We have dissolved government and institutions. We are going to rewrite a constitution together” Doumbouya announced.

But adding to the confusion, the Defence Ministry, announced that the attempted coup had been thwarted by loyal troops, led by the Presidential guard. President Conde’s whereabouts however, remain unknown.

The United Nations Secretary-General, Antonio Gutierrez was quick to condemn the apparent takeover, and demanded the release of President Conde. The African Union announced an urgent meeting, to discuss what a spokesperson called “appropriate measures.”

A former highly respected political activist, who was exiled, and saw jail for his activism, Alpha Conde became Guinea’s first democratically elected head of state in 2010.

In October of last year, he was declared winner of a bitterly contested election, whose validity the opposition rejected. In the demonstrations that followed, dozens were killed, and hundreds arrested, in clashes between security forces, and opposition supporters.

With a population of only 10.5 million, and huge mineral resources, Guinea should be one of Africa’s richest nations, but it remains one of the poorest.

The latest turmoil comes as tax rises, and increase for President’s salary added to anger about wealth inequality. The security forces had seen their expenditure cut.

By Sunday evening, it was still unclear who was in charge of Guinea’s government.