The Parliament has requested for tough measures to be taken against district officials who focus on their personal interests and fail to implement citizen oriented support programs.

Some of the districts in this challenge include Muhanga, Bugesera and Gicumbi.

Members of Parliament indicated that there was total negligence in executing social programs like housing for the needy including but not limited to genocide survivors.

The Parliament Public Accounts (PAC) hearing on Friday September 24 indicated that the officials in the mentioned districts were not able to explain reasons behind their failure.

To make the matter worse, it is alleged that they lied to PAC about their performance in this regard. 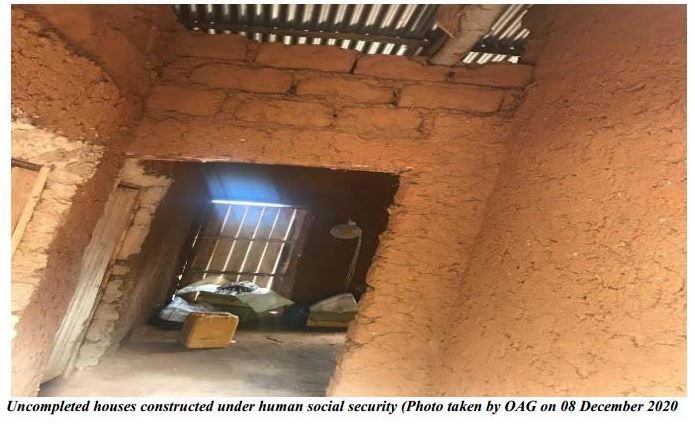 This, said the Office of the Auditor General (OAG), undermines comments made on some of the findings seen on ground during the audit exercise for the financial year 2019/2020.

For example, Muhanga district entered into a contentious debate with parliament as the District Executive Secretary (DES), KANYANGIRA Ignace attempted to convince MPs that comments of the Auditor General and citizens on a failed housing project “were not true.”

In February 2018, the district signed a contract with a contractor to construct 4 houses (2 in 1) for Genocide Survivors  Rwf87.5M and in June, an amendment contract was signed with the purpose of reducing the quantity of houses from 4 (2 in 1) houses to 3 houses (2 in 1).

The price was reduced from Rwf87.5 million to Rwf65.6 million.

As highlighted in the previous year audit report, there was leakage in the roofs for all houses located in Rugendabali and Kibangu sectors in front and the district management was recommended to ensure that leakages are rectified.

However, a field visit carried out on 29 January 2021 after final handover, revealed that, though the highlighted defects were corrected by the contractor before the final handover, leakages in the roof still persisted for one beneficiary.

The OAG recommended that district management should ensure that the existing leakages are corrected to assist the beneficiary to live in a house without leakages but the district stated that the defect was on the roofs were corrected, yet the OAG enquiry said after correcting defects highlighted in the last year audit report, the leakages in the roof persisted.”

When asked why this was not done, Kanyangira said that they had actually repaired the roof ceiling but the citizens still were not satisfied, a response which irked parliament to wonder who is lying between the OAG and the DES.

“Do you want to tell us you corrected the defects but the concerned citizen is lying and so is the comment of the OAG?” PAC Chairperson, Valens Muhakwa asked with no response forcing the MPs to read the OAG comment to the official.

After reading the OAG comments and asking the DES to explain what it meant, PAC asked how come the official says the roof was repaired contrary to the occupants and the judgment of the Auditor General’s.

“You don’t live in the house but insist the house isn’t leaking. Do you want to say the citizen is lying?” Muhakwa asked, a question which was followed by the DES trying to defend his position

After a hyper debate, in which OAG Audit Director showed how they visited the site and discussed the concerns with officials, PAC asked the official to withdraw their statement since it was holding the OAG in contempt. 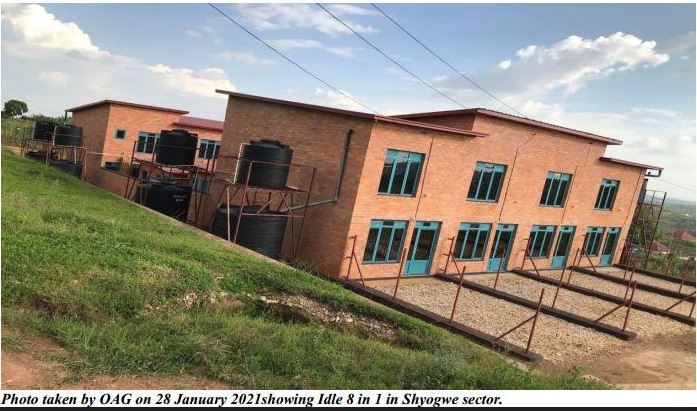 No evidence that the district council approved the implementation of this project and the whole project ending up with no clientele.

Similar housing issues were also seen in Gicumbi, where in June 2020, the district transferred Rwf210.3 million to sectors for construction (using community approach) of 163 houses to address Human Security Issues, implying that the cost per house was Rwf1.2 million. 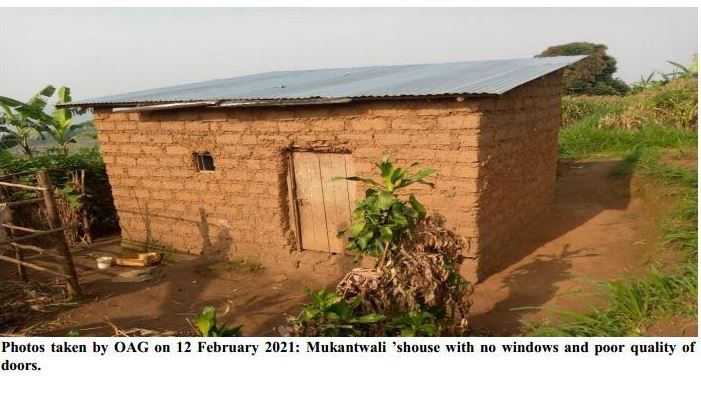 However, the physical verification conducted in different sectors in February 2021 noted the houses had no windows, no finishing and no latrines and kitchens.

In Bugesera they exhibited similar weaknesses noted in construction of 710 houses for vulnerable families. The district constructed 650 houses out of the targeted 710 houses for the year and the budget for each house was Rwf880,000.

However, the audit showed Construction works not completed, Non-compliance with proposed design during construction process, such as no aeration, no plastering cement and worse, inquiry from the owners like (Gasigwa Appolinaire) revealed that the contractor used second hand doors.

Also in October 2019, Bugesera district signed a contract with a contractor for construction of three houses (4 in 1) in Rweru IDP Model Village (phase IV) at Rwf240.8 million but by December 2020 an OAG report revealed that constructed houses are prone to erosion due to lack of protection.

“Inquiries made from beneficiaries of houses revealed that during the previous rainy season, the houses were flooded by rain water,” the OAG said.

None of the district officials gave a satisfactory reason for these failures, compelling MP Muhakwa to warn Muhanga district to desist from defending its mistakes while also contesting the OAG opinion.

He tasked the ministry of local government (MINALOC) to look into the matters.

The MINALOC Director General of Planning, Monitoring and Evaluation, Prosper Mulindwa said there was no defense to any of the above but committed to work with the ministry of finance in following up onsite activities.