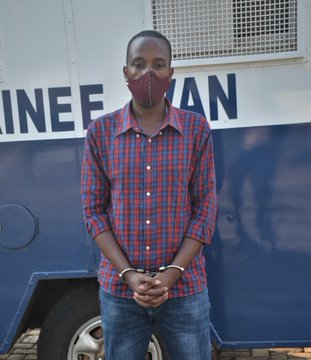 Rwanda Investigation Bureau (RIB) has arrested and detained a suspected serial rapist whose allegedly conned women and girls into offering them jobs with intent to rape them.

The suspect identified by RIB as Theogene Bagaragaza, 35yrs, a resident of Gasabo district in Kigali city was arrested this Tuesday and is currently held at Nyarugenge RIB station pending an investigation.

“The suspects lured his victims telling them that he was offering them jobs in an Italian company located in Gatenga sector, Kicukiro district and in the process raped, rob them of money and personal property in one of the lodges in Gatsata sector, Gasabo district,” RIB said.

RIB said that the suspect has been charged with five counts, which include rape, intent to infect others with an incurable disease, theft, unauthorized possession of personal property, and cybercrimes involving accessing personal property without owners consent.

RIB Spokesman, Dr. Thierry B. Murangira told KTPress that it will not tolerate anyone who is suspected of rape crimes, which is part of their zero tolerance on Gender Based Violence (GBV) related crimes.

“We (RIB) take this opportunity to remind the public to doubt anyone who contacts them with promises of offering a job, as it comes with many risks including being sexually abused resulting to getting infected with disease, and robbed of personal property,” Dr. Murangira said.