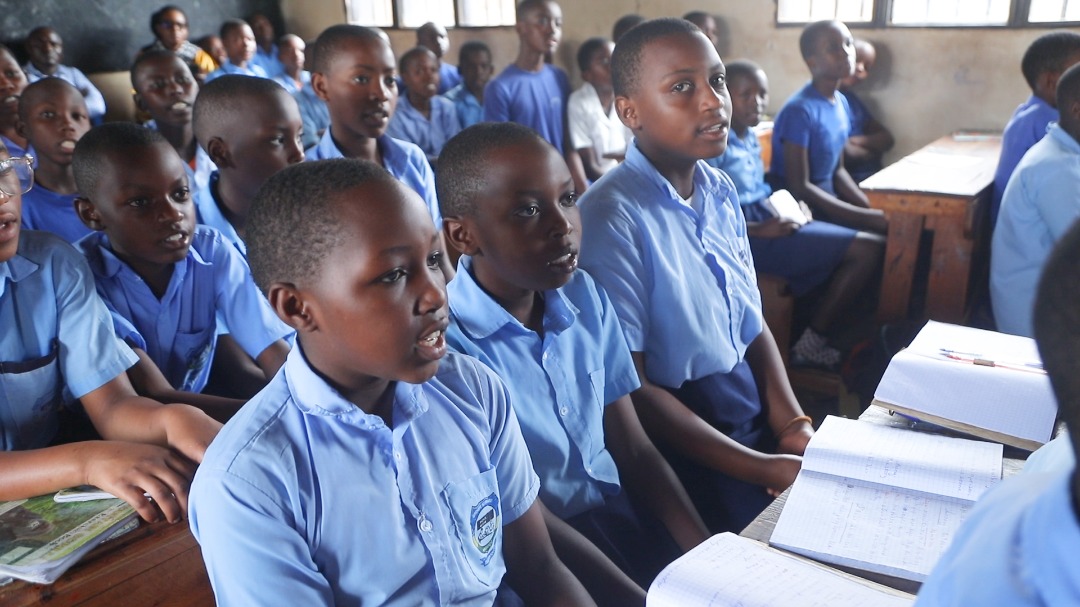 At 7:50am, a stream of children flows through the gates of GS Kagugu− adjacent to Kagugu trading center in one of the busiest business hubs in capital Kigali.

Nearly an hour later, they are still arriving, and guards wait patiently at the roadside, while others stand at the gate.

It’s not easy to get a total of 6767 students aged from seven to seventeen years into one school. But that is only a small part of the challenges.

The school caters for 5350 Primary school pupils and 1417 students from secondary school. It is Rwanda’s most populated school. 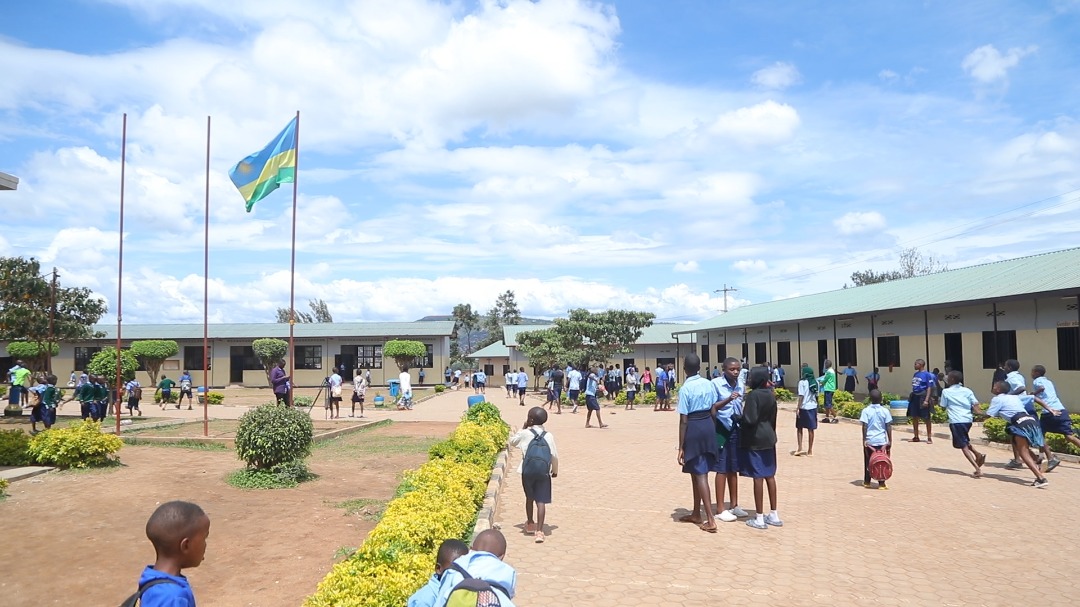 Looking into classes through windows, they are all full, four students sitting on one desk. In a compound, teachers start moving up and down ordering students to enter into their respective classes.

However, it is not an easy challenge; some resist and are seen ‘unnecessarily moving’, sitting on class balconies. At around, 9am classes began for all levels.

To better understand how lessons are conducted here, I asked for permission to attend one of the lessons in primary five. It is a forty minute long social studies lesson; objectives and meaning of symbols on Rwanda’s coat of arms.

The class is full to bursting, to control it; a class prefect helps a teacher to take control of disruptive students, especially middle and back seaters.

As soon as the teacher enters, she starts a class motivation song dubbed I am special, with 105 students, the mood and voice get high as we sing, all together.

Meanwhile, singing did not take long, about a minute, the teachers ordered us to sit down.

“All eyes on me,” Claire Uwimana, the teacher, said.

Silent Quarrel over a lost book

It was time to take notes, as the teacher was on blackboard introducing the lessons, and some students started quarreling over a lost book. One accusing the other over negligence. 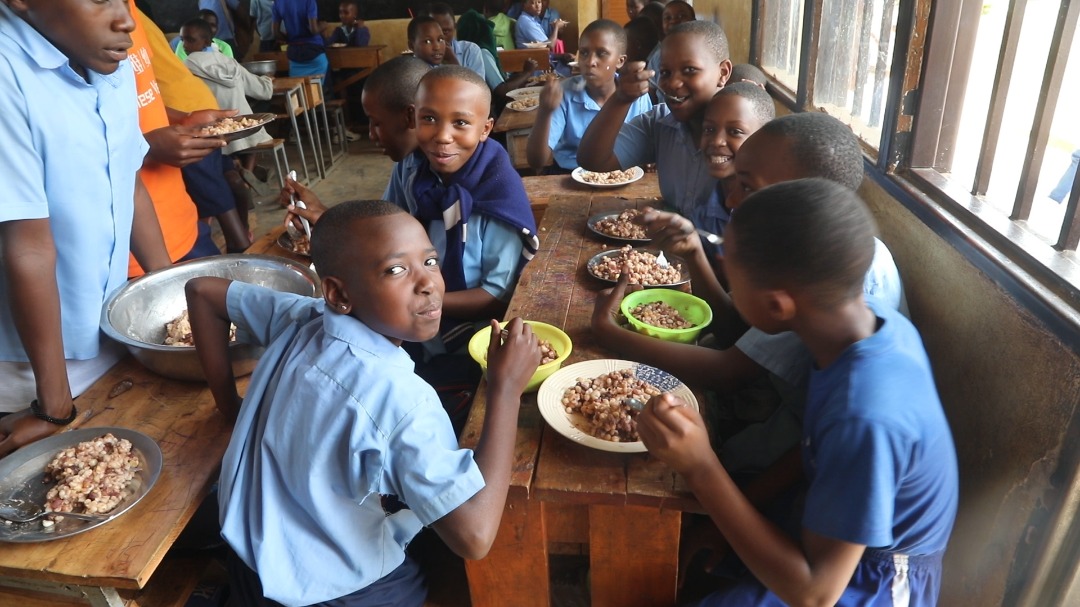 I tried to intervene silently to solve the matter, but efforts were futile, none knew where the social studies exercise book was.

The dispute was silent to avoid the teacher from noticing.

Not so long, our neighbors on another desk were also disruptive, with some lending pens, discussing, laughing while others looked outside through the window to see what is going on−the concentration was wanting.

According to Uwimana, a disruptive student is directed to attend lessons while standing in front.

“It is not easy to control a large class like this. Of course, disruptive students are always there and it kills performance,” she said.

“We give them small punishments; they are forced to stand for about five minutes or more,” she added.

The lesson was almost coming to an end, a teacher gave an exercise to test whether they understood what had been taught, but she evaluated only 10 books out of 105.

“I cannot conduct a lesson in 40 minutes, give examples and at the same time mark 105 books. This is impossible. I can’t get time for that,” Uwimana said.

Before leaving P.5c class, students exchanged books to mark themselves. This is a normal self-evaluation.

“It is not effective, some mark themselves right, even when answers are wrong,” she said.

A class has an average of 85 students, and Uwimana teaches social studies, Kinyarwanda, French, English and Physical Education and Sports. 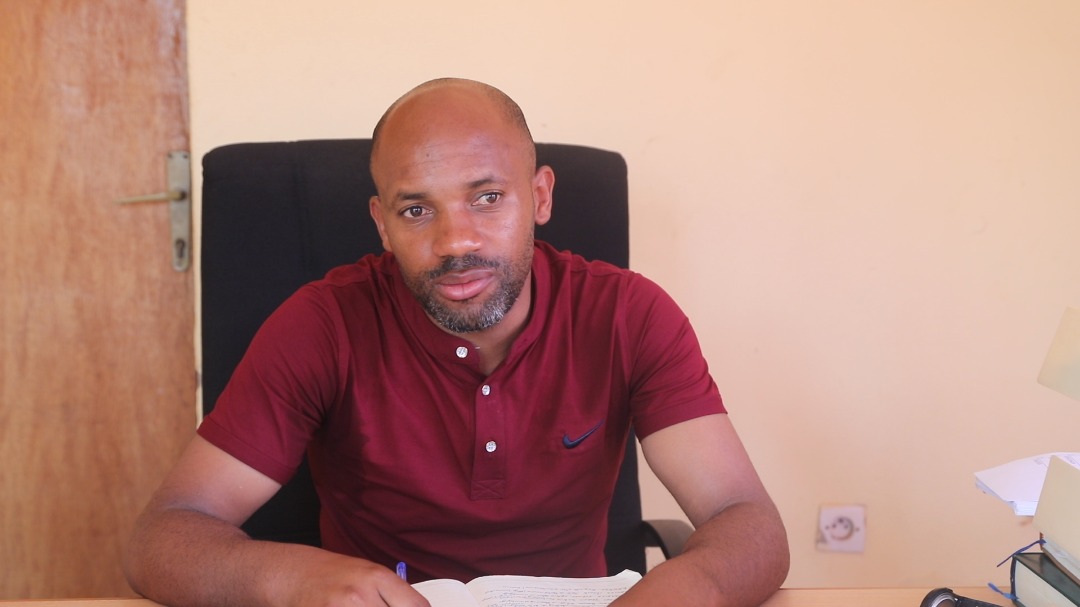 It is perhaps one of the hardest jobs to do.

GS Kagugu, founded in 1924, now has about 60 classrooms, both secondary and primary school.

At 10:am, the alarm sounds, students storm out of classes, they flood into the compound to play various games; volleyball, football and athletics. The play grounds are insufficient.

It was a twenty minute long break, and we enjoyed playing football made out of polythene bags−karere.

Another alarm sounds, students are expected to return to class, but some are seen meandering in premises.

Quality of education at stake

With a large population, students have limited access to various academic services including library, computer laboratory and a playground that can serve all the students.

The entire school has two working computers that are also not used by students yet.

To read, students are only allowed to borrow textbooks in a store, and take them home or in class.

“We have books, but they are filled in a small room. We don’t have space for a library. The least we can afford is to lend them the books and allow them to take them home. Each student spends five days with it,” Caritas Nyirandama, the librarian said.

“A student must present a school card to be given a textbook. It becomes easy to trace them and return them to the library,” she added.

According to Uwimana, a class should have at least 40 students to simplify evaluation of students and follow up to help weak ones.

“To mark books, we write right answers on the blackboard and order students to exchange books and mark themselves. However, some mark wrong answers, it is not effective,” she said.

According to Jean Bosco Bizumuremyi, the headteacher for GS Kagugu, 75% of national examination candidates in all levels pass.

“We have a few students who fail. It is always our wish to have all students pass, but there are many. It is not possible for teachers to reach every student,” Bizumuremyi said. 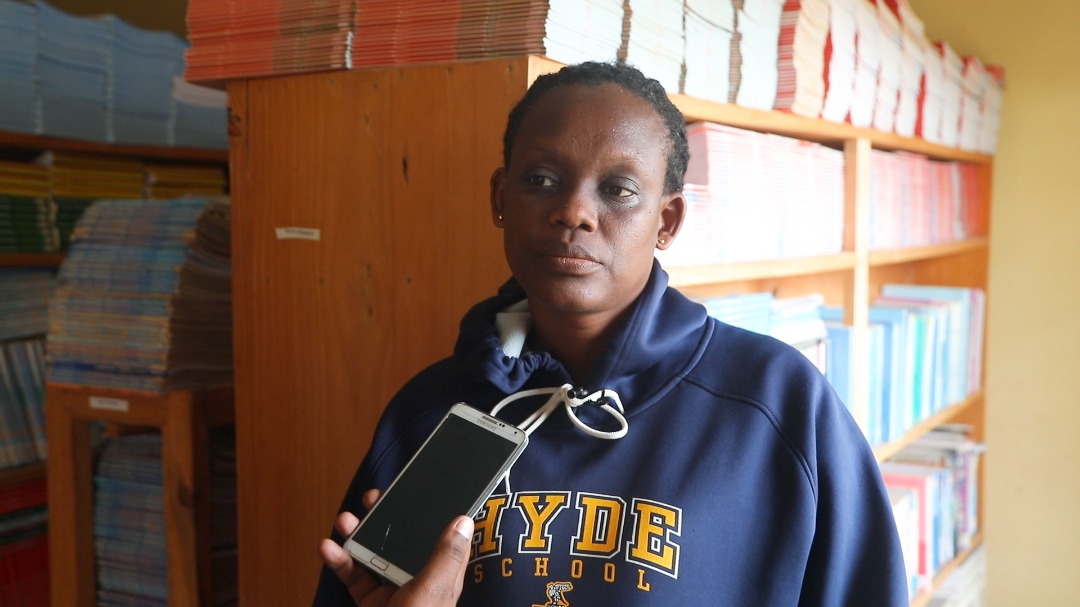 He pointed out that to solve the issue of population, two more public schools should be built in the same area.

Time is flying, and a third alarm sounds at 11:40am for lunch. It is the time to transport food from the kitchen to classes in saucepans to be served.

Every Thursday, Imvungure food (mixture of maize and beans) is prepared.

Another colorful activity at GS Kagugu, is lunch time. Today, the food is a traditional cuisine made of corn kernels mixed with beans.

Students volunteer to transport food to their respective classes in sauce pans to serve their classmates and after lunch, everyone will put their plate and the folk in their school bag.

The school spends over Rwf1.6 million daily for all the students to eat.

According to school lunch menu, on Monday, students are fed with posho and beans (2 tons and 310 kilograms respectively).

On Tuesday, the school brings rice and beans (600 kilograms and 310 kilograms respectively) and on Wednesday, the students enjoy sweet potatoes and vegetables.

On Thursday kernels and are the menu of the day, before sending the students off to the weekend on Friday with posho and beans again.

For this first term only, the government contributed over Rwf 52 Million to GS Kagugu in a program dubbed school feeding. 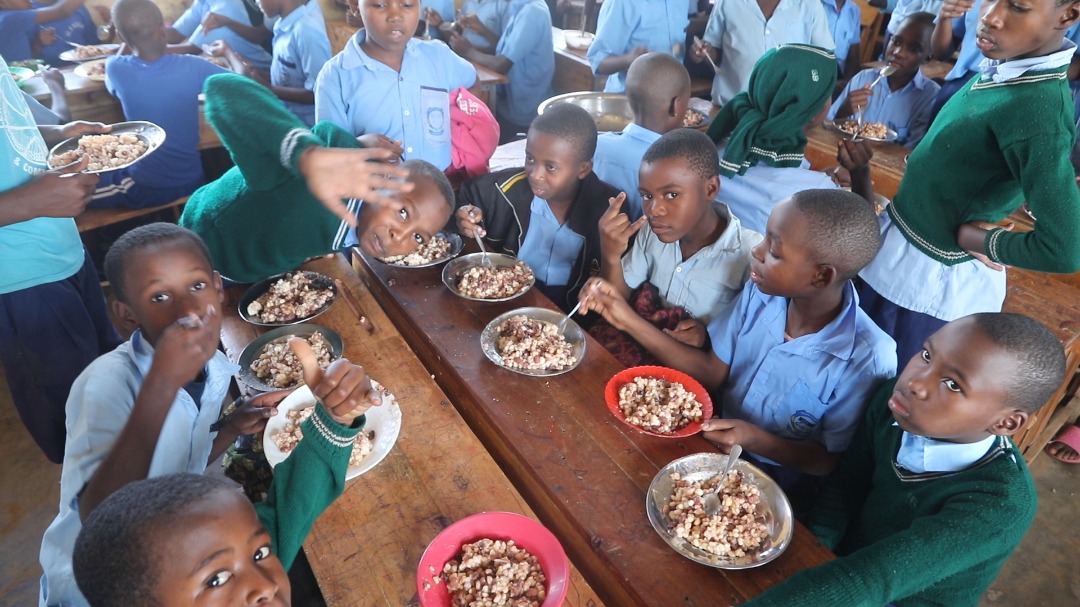 Parents also contribute for their children to eat. However, some parents have reportedly failed to cooperate. For example, in primary only 50.8% of primary students contribute on feeding, while in Secondary level, only 28% contribute.

“We don’t cook enough food because some parents have refused to contribute. We share what is available to students. Also, the school kitchen is small, so we need more utensils and facilities. For children to get enough food,” Jean De Dieu Sacyeza, a school accountant said.

“We have to add a certain quantity on everything,” he added. 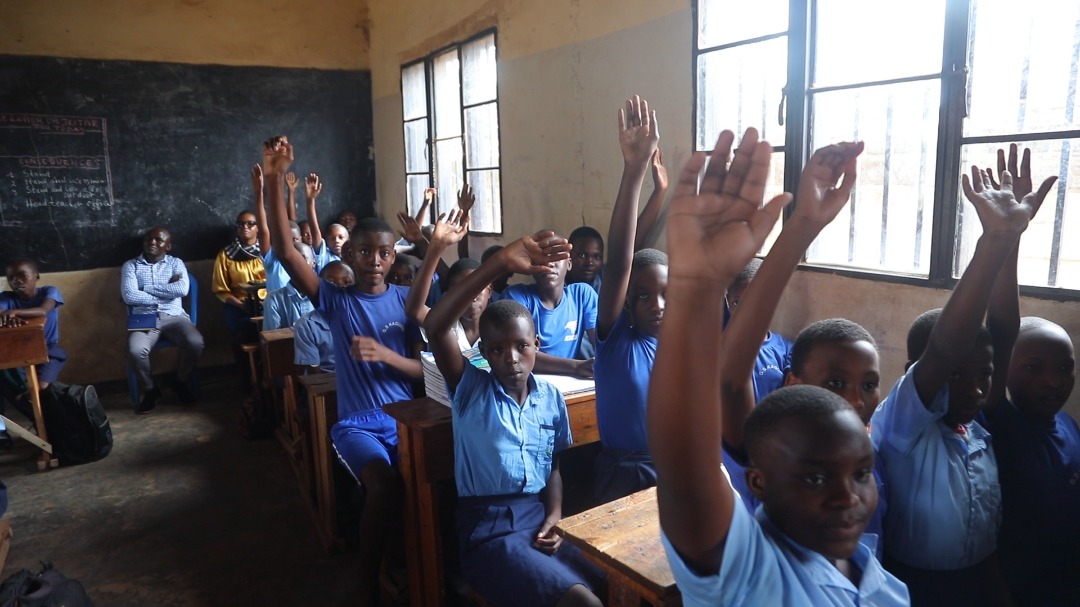 At around, 2pm students return to class. Everyone has been served lunch; lessons continue. For teachers, they only have less than half an hour for lunch.

In at least every two minutes or so, students visit pit latrines, a few meters from the school blocks.

For the whole day I spent with children, I was among the users. Obviously, toilets are used by 6767 students and they are stinky and not clean enough. Honestly, it is a place anyone would not feel comfortable to have a short or a long call.

To the pupils, perhaps a few cared about stinking. Some spent more than 10 minutes standing near latrines discussing.

Some escape attending lessons on the excuse that they are going for a short call. They are seen standing discussing with colleagues.

“I will go back to class; I feel so tired. They are so smelly, but we are used to it,” one of the students replied when I asked her why she was not attending lessons.

It is in the afternoon, and teachers are relentless in running after students wanting to dodge classes. This is a cat and mouse game they have been playing since morning.

According to Bizimuremyi, latrines are cleaned every 10 minutes by cleaners, but some students also volunteer.

“No one stands here, everything is quick. You have to assume something is wrong from a certain angle. Even if you are not in class, you have to keep monitoring in classes and outside,” Bizimuremyi said.

Being a teacher at GS Kagugu is a hard job, but it gets worse during examinations; teachers have to mark hundreds of examination papers on time to avoid delaying report card issuance. 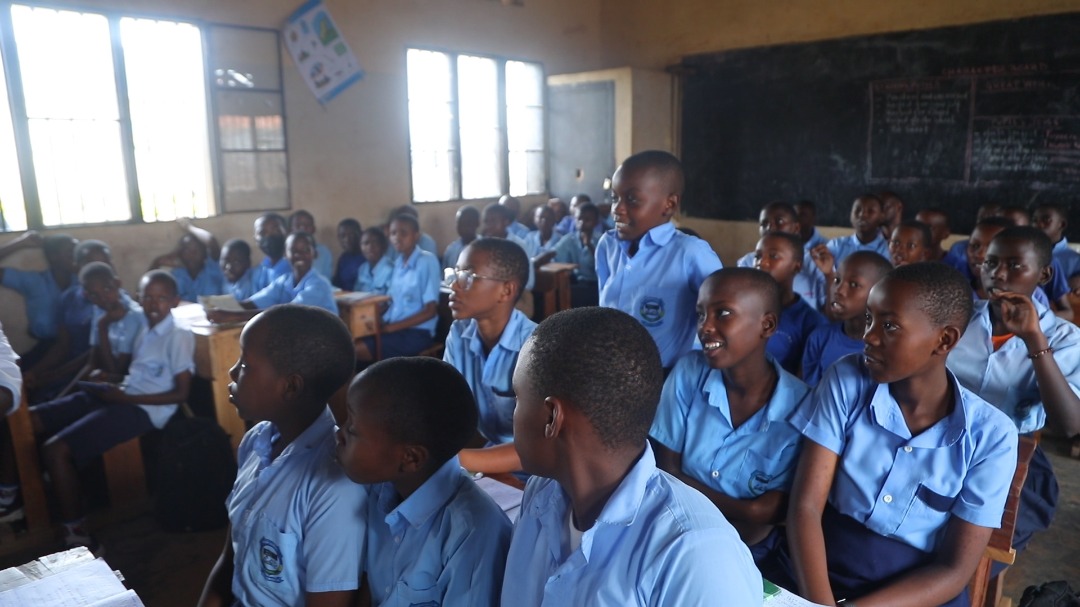 “You can Imagine, if I had an average of 85 students in each class. That means I mark over 500 papers for one subject, and I teach two subjects. This is too much work. We come to school for marking at 8am, but we cannot complete marking easily,” Vuganeza said.

“We take some papers at home and continue with marking at night. Sometimes we fail to complete them and you are forced to spend our money on hiring some teachers who have few lessons to help us on marking,” he added.

He pointed out that the only way of solving GS Kagugu’s dense population is building more schools in the area.

The school is located in one of Rwanda’s densely populated cells of Kagugu.

Meanwhile the second biggest school is believed to be GS Kagarama, also located in Kagugu. News has it that, the school with 4000 students was build in 2020 to decongest  GS Kagugu.

Kagugu Cell had 49,288 residents, distributed in 13, 080 households, according to data from the Local Administrative Entities Development Agency (LODA), which was most recently updated at the end of 2019.

It has been a long day, and eventually the final alarm sounds. It is around 40:45pm, the time to go back home. Like the morning hours, when the alarm rang students flooded in the compound with noise at highest volume.

Security guards take up another uneasy job to have each student cross the road safely back home. They direct traffic, which commonly gets heavier, in rush hours.

CIMEGOLF Tournament 2022 Last Edition To Kick Off On December 3