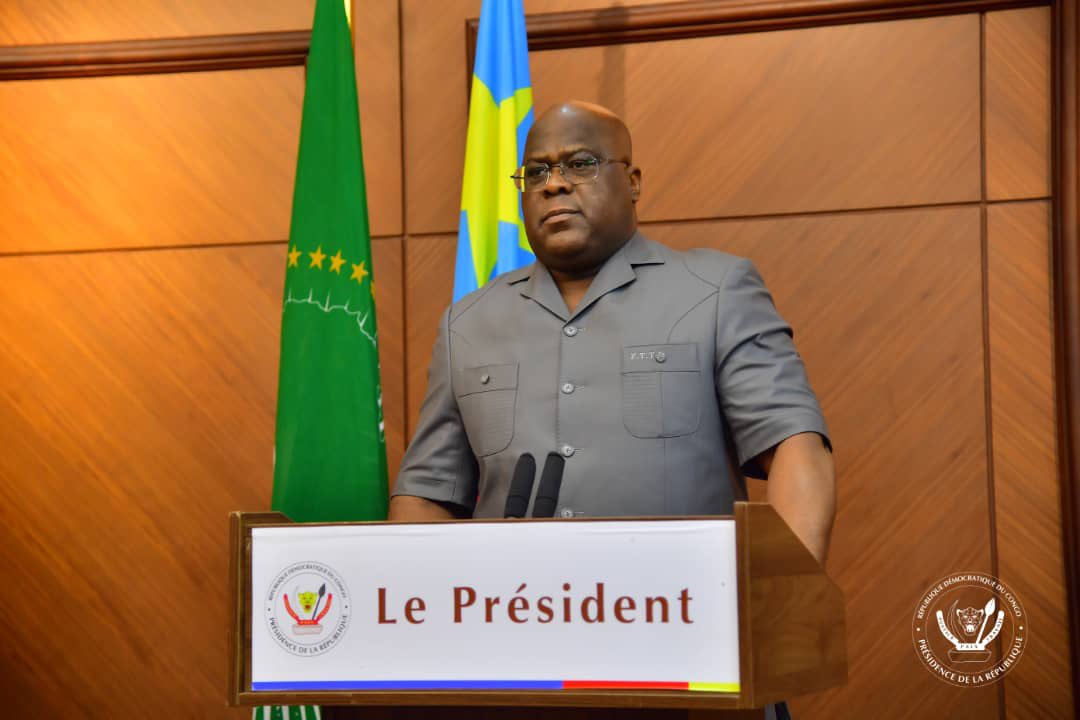 Democratic Republic of Congo President, Antoine Felix Tshisekedi, on Thursday urged citizens, mainly the youth, to enlist in the government forces FARDC or join vigilante war groups, in the cause to defend the country against ‘perceived enemies’.

The Congolese leader, in a national address aired on the country’s national television RTNC, urged young people to get up and defend the country, in an anti-Rwanda inflammatory speech that could spur more ethnic violence targeting Kinyarwanda-speaking communities.

In the speech aired on the eve of the African Union-supported third Inter-Congolese peace dialogue expected to open in Nairobi today November till November 13, 2022, Tshisekedi showed no intention of pursuing a political solution to the situation.

Throughout the speech, President Tshisekedi continuously referred to M23 rebels as ‘terrorists’ backed by Rwanda in terms of men and logistics, categorically stating that the war option against Rwanda remains open.

Without touching on the causes of the conflict that has ravaged the Eastern part of the country for decades such as the existence of armed groups that threaten regional security and the grievances of Kinyarwanda-speaking Congolese, Tshisekedi once again seemed to use Rwanda as a scapegoat for his country’s failures.

In the address, Tshisekedi, who is said to be strategically positioning himself for another term in office, gave himself some props, claiming that since he came into office, he tried to mend relations with neighbouring countries, including Rwanda.

“With Rwanda, a memorandum of understanding was signed in the area of gold trade with a national company, while Rwanda’s national carrier opened routes to our country and a double taxation agreement was signed,”

“Despite this, this country surprised us by reactivating the M23 terrorists, who had been defeated by weapons in 2013. The M23 resurfaced, taking our army by surprise, particularly in Bunagana, which has been occupied since June 13, 2022,” Tshisekedi said.

Despite different reports confirming the alliance between government forces FARDC and the Democratic Forces for the Liberation of Rwanda (FDLR), a terrorist organisation that has existed in DRC for decades, Tshisekedi openly denied the collaboration, instead claiming that Rwanda harbours expansionist desires.

“Indeed, under the fallacious accusation of FARDC support for the FDLR, Rwanda has expansionist ambitions with the main interest of appropriating our minerals and to do this, it is working to destabilize eastern Congo to create a zone of lawlessness in order to satisfy its criminal appetites “, Tshisekedi claimed.

In order to deal with the situation, Tshisekedi said there are two options: diplomacy or war, claiming that he chose the first option, diplomacy, and would resort to the second option if the first option doesn’t deliver results.

Despite the claim of pursuing peaceful means, President Tshisekedi has in the past been on record that he is ready to go to war with Rwanda in different interviews and addresses.

President Paul Kagame has in the past said that he would not engage in ‘loose war talk’ like his DRC counterpart, while in different statements, the Government of Rwanda has called out DRC’s provocations.

Earlier this week, General James Kabarebe, President Kagame’s security advisor, pointed out that Rwanda would not go to war with DRC “because the Congolese are protesting and burning the flag or throwing stones at the border.”

“You cannot go to war with a mad person. You let them do whatever they want but draw a red line which they cannot cross,” Gen. Kabarebe told students of University of Rwanda (UR) in a town hall meeting on Wednesday.

In what sounded like a call for war, Tshisekedi seemed to suggest that all diplomatic efforts have failed and as the ‘guarantor of independence, national unity and territorial integrity’, he is mandated to protect the country at all costs.

“My very dear compatriots, let’s never doubt that together thoughtful and committed we can change the world,” Tshisekedi said, rallying the armed forces to act with a high sense of patriotism.

“The war imposed on us by our neighbours demands sacrifices from each of us. Now is the time to silence our political differences in order to defend our motherland together,” he said in a speech that mainly targeted Rwanda.

He appealed to young people to massively enlist in the armed forces, ordering that recruitment centers be established with immediate effect.

“In response to the strong demand from young people, I invite you to organize yourselves into a vigilante groups, with a view of accompanying and supporting our defense and security forces in the accomplishment of their noble mission.” Tshisekedi said.

Observers on social media pointed out that the speech is likely to inflame the already worrying ethnic violence targeting Kinyarwanda-speaking groups in DRC.

Tshisekedi’s speech came a few weeks after fighting resumed after FARDC attacked M23 positions despite an earlier lull aimed at giving a chance to diplomatic efforts.

The rebels, who have the entire area of Rutshuru under their control, said they reacted after FARDC attacked them. Reports indicate the M23 is currently a short distance from the city of Goma.

Rwanda maintains that a political solution is what is needed to resolve the conflict, particularly accusing Kinshasa of reneging on different accords signed in the past, including the 2013 Nairobi peace agreement which addresses the grievances of M23.

Under pressure from opposition, President Tshisekedi has in recent months upped the ante in his anti-Rwanda rhetoric, with observers pointing out that he is using the conflict in the Eastern part of the country to position himself for a second term in office.

Speaking to local media earlier this week, the Deputy Government Spokesperson Alain Mukuralinda said that Kinshasa is using Rwanda as a pawn in skirmishes ahead of the forthcoming presidential elections.

“Rwanda cannot accept to be used in the political games of a neighbouring country, including using Rwanda as a pretext to postpone elections. We don’t want to be part of this drama,” Mukularinda told a local radio station.