Three mothers in rural Nyaruguru district, Southern Rwanda, may not appear in public again. They have resorted to living a lonely life after the doctor told them that their health problem was beyond his capacity.

For five to eight years now, the three women from Cyahinda sector cannot walk in public neither can they have the chance to sit with neighbors in the ordinal community meeting to discuss society matters – akagoroba k’ababyeyi.

They cannot sit with family members and cannot attend a wedding of their children, because the community perceives them as “cursed”.

For these women, the choice of death would be the right option other than staying in a world of loneliness after the doctor’s diagnosis showed they had ‘obstetric fistula’.

‘Obstetric fistula’ is a deadly disease that has affected millions of mothers around the world.

The disease is caused by a hole between the vagina and rectum or bladder that is caused by prolonged obstructed labour. With this problem, a woman has no voluntary control over urination or defecation.

Most women especially in rural areas suffer the disease and find it difficult to report it to the hospital especially due to the fact that some never attend antenatal care at health posts.

For example in September 2016, health officials in Nyaruguru district discovered 23 mothers with obstetric fistula. Through partnership with Maternal and Child Survival Programme – a partner with the district, the patients were sent to Ruhengeri hospital, Northern Province.

After receiving operation, nine of the victims were completely healed, while others remain on treatment.

However, the most shocking news came to three mothers, after doctors confirmed they had no capacity to treat them – leaving them in complete agony.

Musanabera is the only person allowed to visit the three mothers because it’s believed that she can sympathize with them using her previous experience of suffering and surviving the fistula.

In 2009, Musanabera was expecting to give birth to her first born child. However, this did not happen as expected.

During labor, the pregnancy turned out to be a miscarriage, and fitsula immediately attacked her body. She started experiencing uncontrolled urine and feces.

“I never had time to feel I wanted to go for short or long call. It could just happen anytime,” says the 30-year-old Musanabera.

For eight years, Musanabera lived with the disease and endured severe segregation.

“I never wished to get out the house. I was nervous that people would laugh at me. Those I met ran away in resistance of my smell. It was a trying 8 years span,” Musanabera told KT Press.

With no financial capacity to even buy sanitary pads, Musanabera opted to wear plastic bags.

“My husband left me alone. He said he would not share the same bed with me. It was terrible.”

This entire struggle she went through was a result of lack of financial capacity to go for treatment.

It was until 2016, when a health facilitator in her area came to her home and advised her to go to district offices to meet health officials who would then take her and other fistula patients to Ruhengeri hospital for free treatment.

“At the hospital, we never paid any penny. We were taken care of and those who started recovering went back home,” Musanabera said.

While 20 patients including Musanabera exhibited signs of recovery, three other patients remained at the hospital for more trial. It never worked though.

“We were told the disease would not be treated. It was the worst news of the day,” another recovered mother told KT Press.

Today, these women never get outside their homes. Their families, even neighbors have abandoned them. They never like to talk to people.

One of their neighbors, Geraldine Uwamariya told KT Press that the disease has made her neighbours the most hated.

“They mock them (victims) wherever they see them. The victims have completely decided to remain indoor. They no longer move outside their homes,” she said.

Who should treat the ladies?

Despite the horrible news from Ruhengeri hospital, the fistula victims remain with high chances of treatment.

A doctor at Ruhengeri hospital who attended to these patients told KT Press on condition of anonymity, that the disease has worsened which complicates their treatment at the hospital.

However, he said their case can be handled in bigger referral hospitals.

“The disease is beyond a hospital capacity, but these patients can be treated if they are transferred to other hospital with more specialists,” said the doctor who preferred anonymity.

Athanase Karemera, a health inspector in Nyaruguru district – home to the victims, confirmed that the victims still have hopes of treatment, but the issue remains financial means.

“Yes, doctors at Ruhengeri hospital confirmed their (victims) disease was beyond their control. But we believe the patients will get treatment,” he said.

According to Karemera, negotiations are underway between the district and officials from Maternal and Child Survival programme – an International NGO working with the district’s health sector to fund treatment costs.

Speaking to KT Press, Pascal Musoni, an official from the NGO said plans are under way to channel the funds through the district.

“We have always been working with the district especially in funding different health activities. This is the same way we shall do to help these women get treatment,” said Musoni.

A fistula surgery in Rwanda costs around Rwf250, 000 ($300). However, the Ministry of health has been courting specialists from abroad to freely treat patients. 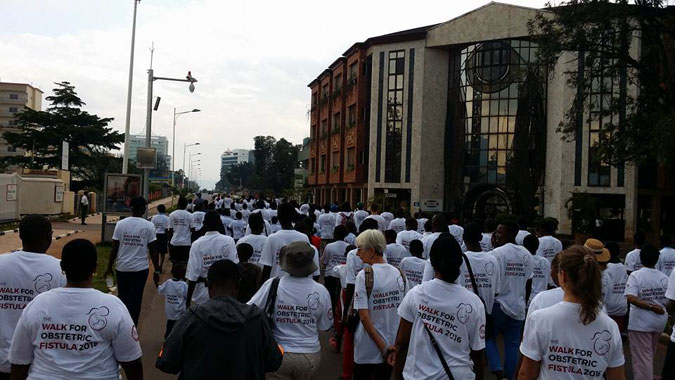 Kibagabaga hospital – a public medical facility in the capital Kigali is currently the centre for fistula treatment services after the University Teaching Hospital of Kigali (CHUK).

In several occasions, the International Organisation for Women in Development (IOWD) sent its obstetric gynecologists to voluntarily distribute padded panties to fistula victims whose conditions cannot be repaired with the surgery available in Rwanda, among other surgery services they provide.

According to Ministry of health officials in the department of maternal and child health monitoring and evaluation division, more than 3,600 women have been treated fistula disease since 2005 countrywide.

Official estimates show that two in 1,000 mothers in Rwanda are fistula victims.

Though obstetric fistula is not an immediate killer disease, the period patients spend with it is devastating.

Probably, the three poor women with fistula in rural Nyaruguru could finally get rescued from the deadly hell of loneliness.

The only concern would be to know how long it would take for health officials to connect the dots and have them see the doctor.