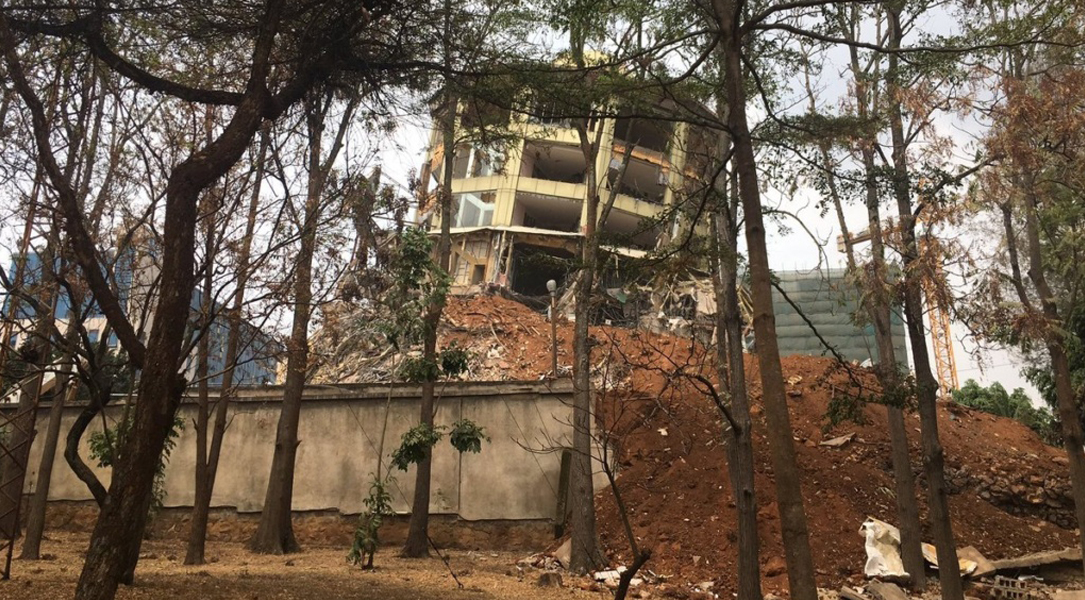 When the European Union envoy in Rwanda Michael Ryan made a comment on Twitter comparing a planned demolition in the capital Kigali to the bombed ruins of Syria he may never have anticipated the controversy he would find himself. That is exactly what is happening.

Justice Minister Johnstone Busingye described the diplomat’s comment as “fiction” and other some Twitter users reacted with fury. It is not the first time the EU envoy finds himself in a position where he has to defend himself.

The controversy emerged Monday when Ryan was reacting to the demolition of Top Tower Hotel structure which had been decided months ago by Kigali city authorities. The building is next to the residence of the EU envoy and the location is to be redeveloped.

However, on Monday, the last segments of the planned demolition knocked a portion of the wall fence of the Envoy’s residence. His reaction was swift and it was clear the diplomat was angry.

It is this comparison with the Syrian capital that has been reduced to rubble by years of bombing that put the EU envoy in the Twitter firing line. Justice Minister Busingye was visibly irritated.

“Amb, KCC says demolition went well, that part of the fence was damaged last week, that NO ONE WAS KILLED or HURT. Truth being adjusted to fit?” responded Busingye, adding; “Your Excellency, kindly admit that your allegation of a worker’s death is fiction, as KCC confirms, or prove KCC wrong by sharing your evidence.”

“Excellency, please take note that no death occurred to anyone. The author, Amb Ryan, is aware and won’t retract his insanely injurious lie.”

“…Hope you will martial the humility to do the honourable thing; retract your death alarm ‘n clear the air u polluted.”

Within hours of the envoy’s Syria comparison, there were more than 200 Twitter responses. In the envoy’s initial statement it had appeared as though the collapsing walls had killed somebody in the EU residence. But the envoy himself clarified later that nobody had been killed.

Kigali City confirmed that nobody was killed and also announced that the buildings damaged will be repaired by the city.

The comment attracted the ire of Martin Ngoga, the incoming speaker of the East African Legislative Assembly (EALA). “If this is how much he can expose to us I can’t imagine how much pollution is in the backyard of his diplomatic work,” Ngoga fired back.

Dr Lonzen Rugira, a regular commentator on local media was more pointed: “Undue excitement will have proven that he is unfit for the task. Else, the motive of his unusual excitement should be a subject of interest.”

Some Tweeps accused the envoy of inappropriately referencing a conflict which has been fueled by the same interests he represents in Kigali. Syria has been destroyed and its people left without a country by the governments that Ryan stands for, they said.

The diplomat himself has kept quiet – probably in effort to extinguish the fires he lit.