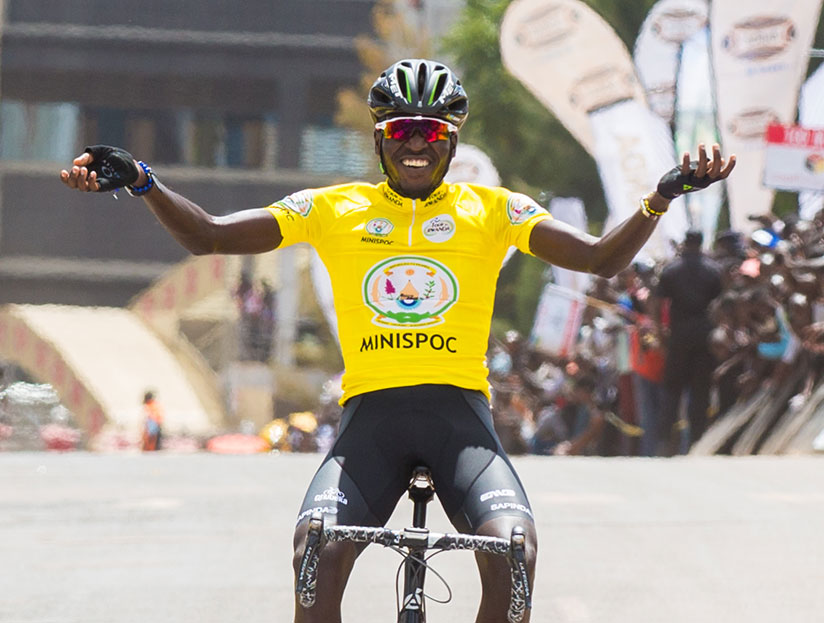 The D-day has come as the ninth edition of Tour du Rwanda 2017 swings in on Sunday, November 11, 2017 with champion Rwandan Valens Ndayisenga seeks to defend the title.

The 2017 Tour of Rwanda has begun with a 3.3km prologue, starting and finishing at Kigali’s Amahoro Stadium. The course should take the fastest riders around four minutes to complete and provide an indicator as to who is in form and ready to fight for the overall.

Ndayisenga (Tirol) is aiming to defend his overall title at the 2017 Tour of Rwanda and secure a contract in Europe for next season. The 23-year-old also won the 2014 edition of the race and holds the joint record of stage wins at the UCI 2.2 race with four.

However, Ndayisenga finds himself in contract limbo six weeks from the New Year.

Ndayisenga hasn’t raced since making his elite World Championships debut in September, but according to Cyclingnews, he said that he is confident of further success in the race. Of his four previous showings at his national tour, 2015 was the sole edition in which Ndayisenga did not win a stage or claim the yellow jersey.

Abraham Ruhumuriza is a five-time winner of the race, including four straight between 2002 and 2005, but his wins came before the race was upgraded to UCI status in 2009.

Following recent Tour of Rwanda tradition, the race starts with a fast 3.3km prologue around the Amahoro Stadium before eight challenging road stages in the ‘land of a thousand hills’.

A proven performer in the prologue, there is little Ndayisenga’s rivals can do against the clock. However, the two-time national time trial champion is expecting to be heavily marked by the 69 riders in the peloton not lining out in Tirol team kit over the seven road stages.

“All riders watch me in the race. They think about me because I’ve won two times and they think I want to win again. That is why they must watch me. I have prepared for this tour and if I have the opportunity, I can win the Tour of Rwanda again,” he said, pointing to former teammate Metkel Eyob of Dimension Data as his primary rival to the yellow jersey.

“I don’t like the pressure but they must put me under pressure because I am the champion from last year.”

For Ndayisenga, the chance to add another page of history at the Tour of Rwanda has underlined his preparation for the race over the last few months.

Out of contract at the end of the year, the $1900 winners cheque will be a welcome reward for victory. However, Ndayisenga is hoping victory will lead to signing his first World Tour or Pro-Continental contract.

“I want to try and do my best because now I have no contract with my team for next year. I have to work hard to find a contract in Europe for next year,” he explained.

“If I have a contract in Europe I can try for a contract with a Pro-Continental or World Tour team. If I get that contract I can race a Grand Tour or the big tours. That way I work hard to win again. I need to do the Tour of France, or Giro d’Italia or Vuelta a Espana.”

While the majority of the European peloton is in the midst of its off-season, African cycling is readying for one of its most prestigious races of the year, the Tour of Rwanda. Since attaining UCI status in 2009, the race has grown in stature and provided a launch pad into Europe for African riders.

Following its first successful chapter, the race will turn a page in 2018, with the Tour of Rwanda set to move into an August time slot and then upgrade its status to 2.1 from 2019.

The 2017 Tour of Rwanda begins with a 3.3km prologue, starting and finishing at Kigali’s Amahoro Stadium. The course should take the fastest riders around four minutes to complete and provide an indicator as to who is in form and ready to fight for the overall.

Stage 1 also starts in Kigali before snaking down to the race’s southernmost finishing town in Huye, over 120.3 kilometres. In the opening 80 kilometres, riders tackle a category three climb, then two category two climbs to provide an impetus for the breakaway and welcome the peloton to ‘the country of a thousand hills’. A rolling final 30km kicks up with a category three climb inside the last kilometre to force a selection in the fight for stage honours.

For stage 2, the race heads slightly north to Nyanza, for the start of the longest stage in 2017 at 180.6km. From Nyanza, the race heads to the northwest for a stage finish on the shores of Lake Kivu at Rubavu. Of the six categorised climb in the stage, three are category one and should see a breakaway battle for KOM points. With a largely downhill final 15km, a select sprint finish looks to be on the cards.

The race remains close to the Congo border for stage 3 with Rubavu playing host. One of the shorter stages of the race, the peloton will cover 97.1 kilometres across the north with a category one climb mid-stage the major obstacle. First, though, the peloton complete four laps of a Rubavu circuit before bidding adieu. Musanze, the home of the Team Africa Rising Cycling Center, will host the finish of the stage.

Stage 4 on paper is one the hardest of the race with two category climbs inside the first half of the 120-kilometre stage that skirts the west of Kigali on its route south. Rolling out of Musanze, the peloton will immediately start climbing to 2100 metres and then drop down to start the second major and slightly higher climb of the day. A descent off the climb drops the riders down of the climb, followed by the final two category two, and category three climbs before the finish in Nyamata.

Nyamata doubles as the start host for stage 5 to begin the final third of the race. Heading north towards Kigali, the riders face a category 2 climb before turning towards the east and finish in Rwamagana. A small pave sector awaits the peloton before and after the summit of the first category three climb. The peloton then faces the second climb before entering Rwamagana for one circuit of the city and finish outside the Hotel Dereva.

Stage 6 is the shortest of the road stages at 86 kilometres and returns the peloton to Kigali. Starting in Kayonza, known for its Women’s Opportunity Center, the race heads east and passes back through Rwamagana on its way to Kigali. A category three climb comes early before three late category one climbs including the infamous and selective Mur de Kigali, or KN 18 Avenue, before the finish at the Stade Régional Nyamirambo.

The final stage of the Tour of Rwanda remains in Kigali with 10-laps of the capital starting and finishing at the Amahoro Stadium. A category four climb at the end of each lap is the major feature of the stage. The final day of racing provides an opportunity to attack and move up the rankings and force one final shake-out of the classifications.

As the only multiple winner of the Tour of Rwanda and holder of the most stage wins at the race, Valens Ndayisenga can’t be discounted as an overall favourite for victory. With two wins from four starts, he is also a very effective rider in his home tour. The 24-year-old has balanced a racing programme across African and Europe with his Tirol team and enters the race motivated and in form.

Compatriot Joseph Areruya made history at the Baby Giro by winning stage 5a of the race in May. Fourth last year and a stage winner, Areruya was second in 2015 and at just 21, he has already built a successful relationship with his national tour. With Dimension Data for Qhubeka teammate Samuel Mugisha, riding in memory after the tragic loss of his mother, the young duo firm as not only fan favourites but genuine contenders. Eritrean Metkel Eyob adds a stage-winning dimension to the squad quality.

2015 champion Jean Bosco Nsengimana and former national champion Bonaventure Uwizeyimana, both 24, are two other Rwandans capable of shining on the big stage. Gasore Hategeka, meanwhile, makes his ninth appearance at Tour of Rwanda, a race record.

Eritrean Tesfom Okubamariam will be one of the non-locals aiming to impress in the GC battle alongside German Nikodemus Holler of Bike Aid. Colombian sprinter Edwin Avila has been consistent across the season and looks likely for a stage win across the week. Anass Ait El Abdia of UAE Team Emirates is an intriguing addition to the roster with the Moroccan national team as he makes his first racing appearance since breaking a collarbone at the Vuelta a Espana. The Tour du Maroc winner in May, El Abdia could well be an outsider for the overall.