Tens of thousands of people attending the ongoing Commonwealth Games in Australia held a minute of silence to honor victims of the 1994 Genocide against Tutsi as Rwanda starts the 24th commemoration Week.

Before Rwanda Beach Volleyball team composed of Denyse Mutatsimpundu and Charlotte Nzayisenga stood off the sand pitch service line and a minute of silence was observed.

Despite losing two straight sets 2-0 to New Zealand duo Shaunna Polley and Kelsie Wills, Rwandans made the commonwealth community to take part in the commemoration.

The 15-persons ‘Team Rwanda’ at the 2018 CW Olympics in Gold Coast is comprised of athletes, beach volley women, cycling and para weightlifting.

On the other side of the Gold Coast city, the Rwandan community was joined the by other Australians to commemorate Genocide in the ‘walk to remember’ that was led by children of all races flanked by adult Rwandans carrying both the Rwanda and Australian flags in a procession formation.

Elsewhere outside the country, events to mark the 24th commemoration of the Genocide against Tutsi were held.

The Rwandan Community in Uganda contributed Ug Shs. 37 million ($10,000) towards the construction of the Ggolo Memorial Site – a Genocide Museum in Mpigi District, Uganda.

Ggolo Memorial Site requires Shs 3.7b to be completed.

Rwanda’s high commissioner to Uganda, Maj. Gen. Frank Mugambage noted that the museum is envisaged to serve as an education centre that will promote messages against the Genocide ideology, negating and revisionism.

“A constant bell should ring in the minds of all peace-loving people that we need to do more in preventing Genocide from happening anywhere in the world,” Mugambage said.

With President Paul Kagame as the African Union Chairman, the AU staff joined Rwandans in commemoration of the Genocide against Tutsi.

Moussa Faki, the Chairperson of AU Commission said everyone should be driven by the imperative to remember, to draw lessons from our failure and to prevent the Genocide, but warned the world to remain vigilant at all attempts of revisionism.

“We are forever marked by this crime, remembrance is an imperative. It is an imperative vis-a-vis the victims, to honor their memory and not to fall into the trivialization of the crime,” Faki said.

Hundreds dressed in white and grey t-shirts including Amb. Kimonyo made a procession walk, starting from Uhuru Park to Haile Selassie Avenue, Parliament Avenue, and Kenyatta Avenue back to Uhuru Park to commemorate the Genocide. 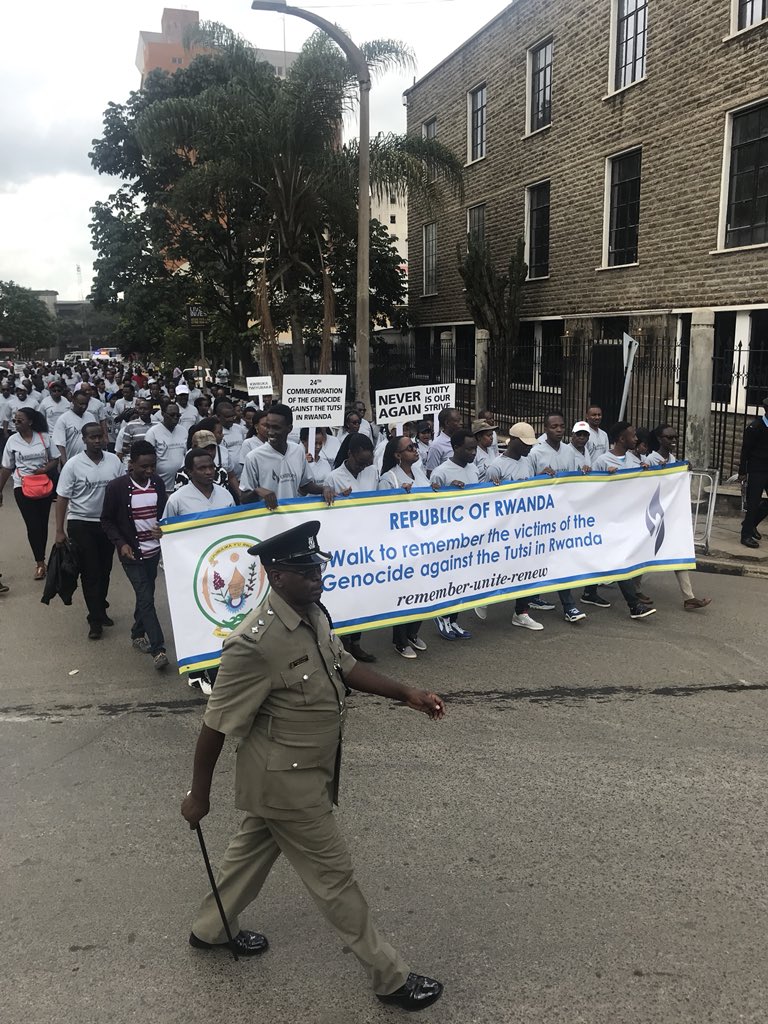 “We do Walk to Remember so as to pay tribute to victims of the Genocide but also say Never Again to the acts of the Genocide in Rwanda and anywhere else in the world,” Kimonyo told the crowd mostly dominated by youths.

Amb. Kimonyo also announced that the main Kwibuka24 event will be held at UN offices in Gigiri on Tuesday 10th April where they will be joined by officials from Kenya government and a representative of United Nations Secretary General.

Rwandans and friends of Rwanda gathered in Arusha together with Rwanda High Commission, East African Community and United Nations Mechanism for International Criminal Tribunal (ICTR) to commemorate Genocide against Tutsi. The event was held at EAC Headquarters.

The ceremony was presided over by Eugene Kayihura, Rwanda’s High Commissioner to the United Republic of Tanzania together with Dr. Harrison Mwakyembe, Minister of Information, Sports and Culture and Alvaro Rodriguez, the UN Resident Coordinator in Tanzania, among others.

Rwanda’s Ambassador to Belgium, Amb. Amandin Rugira led mourners including friends of Rwanda in a commemoration exercise in Brussels. He said that to commemorate is a reminder to the world of what happened in Rwanda in 1994, but it is also to help the survivors rebuild and move forward.

“The fight against the Genocide should not be an exclusively Rwandan fight. Genocide is a crime against humanity and everyone should consider this struggle as his own,” he said.

After this ceremony, a vigil will be held at the headquarters of the African, Caribbean and Pacific Group of States (ACP) General Secretariat located at Avenue Georges Henri in Brussels.

Amb. Ernest Rwamucyo, launched the mourning week of Kwibuka24 in Salem, Tamil Nadu in India. He was joined by Rwandan students in Gujarat.

Yesterday evening the documentary ‘The Uncondemned’ was screened at the Humanity House in TheHague (sold out). After the movie, there was a panel discussion where Ambassador Jean Pierre   Karabaranga took part.

Netherlanders will later in the day held a Walk to remember at 16.00GMT with a quiet trip from Hilton Hotel in The Hague.

In the US, Rwandans are currently sleeping but commemoration events are expected all over the 50 states especially in Indiana and Michigan – with a Walk to Remember at Kroc Center South Bend, and at Michigan State University International Center respectively.

In Germany, Rwandans and their friends met at the Topography of Terror in Berlin from 13:00 for the 24th Commemoration of Genocide against Tutsi.