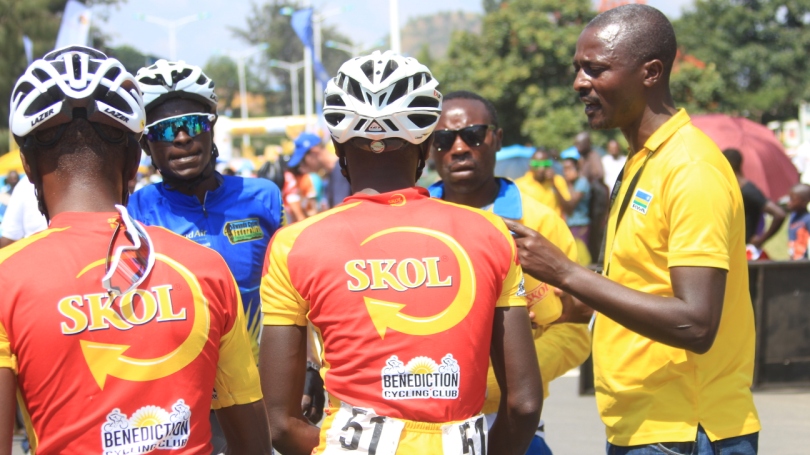 The development was confirmed by Benediction team on Thursday evening by club founders Felix Sempoma and Benoit Munyakindi.

According to the release, the team’s eight-rider 2019 roster will feature 2018 Rwandan cyclist of the year Patrick Byukusenge, 2015 Tour of Rwanda winner Jean Bosco Nsengimana and Bonaventure Uwizeyimana, the 2016 Rwandan national road champion and former member of the Dimension Data Continental team.

The team will also include 2017 national road champion Gasore Hategeka and reigning Rwandan national champion Didier Munyaneza, along with three other U23 riders.

Speaking to cyclingnews.com, Sempoma who will direct the team with assistance from mechanic Theoneste Karasira and soigneur Innocent “Rocky” Uwamungu said: “This has been a dream of mine and Benoit’s for years.”

“We want to give these young men the opportunity they need to continue advancing in the sport. We know Rwandan cyclists have the talent to compete at the highest levels, and we are excited to participate throughout Africa, Europe and the United States in 2019.”

“We are thankful for our sponsors and for the support we’ve received. We also thank the Rwandan Cycling Federation, Simon Hupperetz and Jock Boyer and Kimberly Coats from Africa Rising Cycling for their assistance in launching this team.”

“We modeled our program after Team Rwanda Cycling and learned how to run a professional team through working with Jock and all the coaches and mechanics who have given their time in Rwanda over the past decade,” Sempoma added.

The Rwanda Cycling Federation (FERWACY) president Bayingana Aimable hailed Benediction for the great milestone achieved and promised continued support to other local clubs in their desire to acquire UCI status.

“We encourage other clubs to follow in the footsteps of Benediction club. We know it’s not easy due to resources but we believe that with time this feat will be achieved with time such that our clubs elevate to a more professional level,” he added.

Over the past decade, Benediction Cycling has built a successful track record for producing some of the top cyclists in Rwanda. The team hopes moving to the next level will continue growing the sport in Rwanda while providing the much-needed professional experience for its cyclists.

The Tour of Rwanda is also stepping up to 2.1 statuses this year after a decade of being a 2.2 race. Astana has already committed to the race and will be the first WorldTour team to compete there.

Sempoma founded Benediction Cycling in 2005 with a mission to see cyclists receive an education on and off the bike. Throughout the past decade, Sempoma and Munyakindi built a successful development program, which also includes a fully supported women’s club team in Rwanda.

The Benediction Cycling Program, based in Rubavu, sits on the shores of Lake Kivu in Western Province of Rwanda. Munyakindi is currently vice president of the Rwandan Cycling Federation.

The team has already received its first invitation to a UCI race, with plans to compete in the 2019 Tour of Rwanda. Additionally, the team has a tentative month-long Belgian program planned with the support of SKOL and a possible appearance at late-summer races in the US.