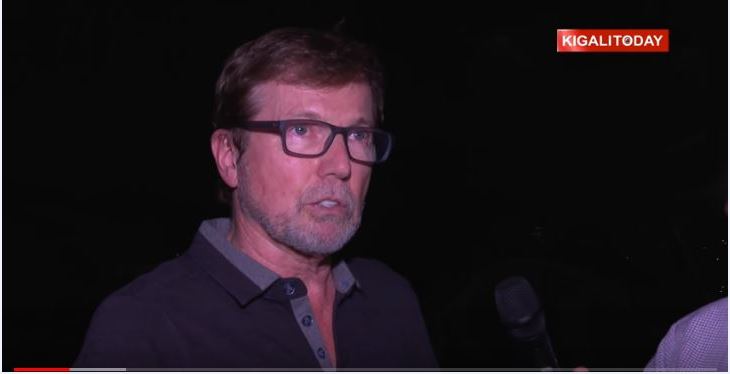 The documentary film, “The 600” soldier’s story, is showing at Century Films, in Kigali City Tower in the capital Kigali, but, only for a limited period.

Anyone wishing to see the film, this year at least, has until July 14.

If any documentary is a must see, it is this one.

The film’s Producer/Director and Executive Producer, Richard Hall, explains that much as he would have liked a longer run in Rwanda, the commercial complexities of recouping the costs mean that he has to take the film to his Los Angeles home.

“But, we will bring it back” he assures, although he could not say precisely when.

The 600 tracks the remarkable story of the Rwanda Patriotic Army (RPA) battalion which found itself trapped, and surrounded by enemy forces, numbering up to 10,000.

In 1994, as they begun to resign themselves to the reality that they were losing the war, the genocidal government of former President Juvenal Habyarimana, agreed to sign the Arusha agreement, which would mean sharing power with the RPF (Rwanda Patriotic Front).

The details of the agreement would be thrashed out in Kigali.

The RPF insisted on a small force to protect its political negotiators. Their opponents were forced to accept that stipulation, but, the conditions were stringent.

The protection force could number no more than 600, lightly armed troops.

As he returned from signing the agreement in the Tanzanian capital of Dar es salaam, Habyarimana’s aircraft was shot down, as it came to land at Kigali’s Kanombe Airport.

Habyarimana enjoyed playing the role of a reasonable moderate, a game that suited his Western backers. The image was mere posturing.

He was in reality the head of a genocidal machine, which steadily strained at the leash he would release whenever it suited his purposes.

He preferred discreet murders that could be camouflaged. A handful, certainly no more than hundreds at any one time.

For the Akazu, whose hatred had long become a religion, this lacked sufficient fervour, and even he had to go.

Their de facto leader, Theoneste Bagosora, had infamously promised to go and “unleash the apocalypse” We now know this was a veiled promised to go and start the long planned genocide against Batutsi, but, at the time, it seemed like the bitter rantings of a depraved psychopath.

There have been strenuous attempts by former members of the genocidal establishment, and their supporters, to pin the shooting down of the Presidential Aeroplane on the RPA, but, all evidence points to the notorious “Akazu”, or clique within Habyarimana’s own inner circle.

Contrary to what has often been claimed, the downing of the aeroplane was not the “trigger that set off the genocide”, rather, it was the signal to begin the long planned genocide against Batutsi, Bagosara’s prepared apocalypse. The murders begun immediately. The RPF now realised there had never been any intention to negotiate. Signing the Arusha agreement had been simply a ruse to gain time, to procrastinate.

The single, lightly armed battalion was stationed at what is now the National Assembly, together with the politicians they were charged with protecting. It is a task to which they were more than equal, having chosen their headquarters strategically. Now however, as the mass murders begun, their mission changed.

The RPF new their enemy well, but, not even they could have foreseen that what begun to take place could even be imagined. For the 600, the mission now was to stop the genocide.

But, what could 600 lightly armed troops, intended as a close protection force do against 10,000 heavily armed troops, supported by thousands more from the murderous Interahamwe Militia?

The film’s title, The 600, is an allusion to The 300, which tells the story of 300 Spartan warriors, who in 480 BC, to cover the retreat of their Athenian allies, prevailed against a Persian (today’s Iran) army of hundreds of thousands.

For the 600 too, the order from headquarters was unambiguous. Do all you can to stop the genocide now raging, and rescue as many of its targeted victims as possible. They had managed to hold off the enemy under heavy bombardment, but, now they had to leave their protected position to go on a the most perilous of rescue missions.

From the soldiers’ and genocide survivors’ own words, the documentary shows the extraordinary heroism that would make the most highly trained special forces proud. It is astounding to think that the majority of the RPA were civilian volunteers who had been lightly trained, some for only a few weeks, with meagre or no logistical support.

As one of the survivors puts it, “I was there, I saw them do it, but, I still don’t understand how it was possible for them to do what they were able to do…” One watches the film mouth agape at some of the feats of daring do. They were warriors, rescuers, and medics, who sometimes carried the injured on their backs, all under enemy fire.

The truth is often stranger than fiction, so goes the adage. If you want to see a thriller that is a true story, learn Rwanda’s recent history, be inspired, moved, and altogether be emotionally affected and shaken. The forget the fictionalised offerings on your satellite television, and go and see The 600, A Soldier’s story.

The film is showing between now and 14th only, at Central Cinema, in Kigali City Tower. It begins at 6pm, daily. Be on time, you wouldn’t want to miss a single minute. The ticket is 5,000

Through firsthand accounts, “The 600” tells the story of a young, well-disciplined, resilient army, willing to make the ultimate sacrifice to save #Rwanda from one of the worst events in human history. Coming July 2019. #Kwibohora25 #The600 #The600Rwanda pic.twitter.com/j8oBqt1pni