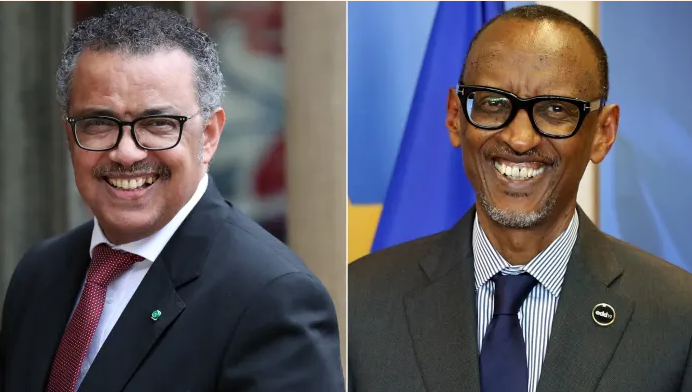 Rwanda’s President Paul Kagame and the Director-General of World Health Organisation (WHO) Dr Tedros Adhanom Ghebreyesus, have published a joint opinion that defends Health as the centre stage for African prosperity.

President Kagame and Dr Tedros, originally from Ethiopian, published the article in the UK-based Financial Times ahead of the 74th Session of the United Nations General Assembly (UNGA) which is taking place in New York, United States.

According to President Kagame and Dr Tedros, “Good health enables people to learn and earn, to start businesses and to thrive.”

Below is the article published in the Financial Times:

For many people, the current Ebola outbreak in the Democratic Republic of Congo reinforces their stereotype of Africa: a place where people suffer from exotic diseases that have long since disappeared from rich countries, or never arrived there.

Africa lags the rest of the world on many health measures. Life expectancy is 10 years below the global average while maternal and under-five mortality rates are double. The region is home to 10 of the 11 countries with the world’s highest burden of malaria and has the highest rates of HIV infection.

Neglected tropical diseases such as leishmaniasis and Buruli ulcer still take an unacceptable toll. But these facts only tell part of the story. At a time when the rest of the world is grappling with the challenges of ageing populations, Africa has the world’s youngest.

Africa is also home to four of the world’s 10 fastest-growing economies and becoming a hub for innovation, research and development. Last year, the World Health Organization ran its first “Innovation Challenge” to promote scalable health solutions for Africa. It received more than 2,400 applications. The winners included a Ghanaian company that uses mobile technology to combat counterfeit medicines; a Nigerian entrepreneur who makes essential eye-care available in rural villages; and the Ugandan developer of a diagnostic test for the early detection of viral haemorrhagic fevers, including Ebola.

What this underlines is that talent is universal; the opportunity is not. This lack of opportunity perpetuates the cycle of poverty, drives African nurses to leave their homes for better-paid jobs abroad and forces others to attempt perilous journeys across the Mediterranean in search of a better future.

How can we ensure that future generations of Africans enjoy the opportunities their talent deserves? One of the best ways of doing that is by investing in health. Good health enables people to learn and earn, to start businesses and to thrive.

It is the foundation for the dynamic and prosperous Africa we all want to see. This is not theory; it is history. Both the United Kingdom and Japan, two of the world’s best examples of universal health coverage, started investing in their health systems in the aftermath of the Second World War when their economies were in ruins.

Those investments laid the platform for both countries to become industrial powerhouses of the latter 20th century. This underscores a vital point: that health is not just an outcome of development; it’s a prerequisite.

Similar stories can be told about our two countries. In Rwanda, health system reforms over the past 15 years, including the provision of free preventive services to more than 90 per cent of the population, have resulted in dramatic declines in maternal and child mortality. The burden of HIV, tuberculosis and malaria has fallen significantly and life expectancy has doubled.

Likewise, Ethiopia invested heavily in building primary healthcare and training thousands of workers — mainly women — to deliver basic health services at the village level. It increased the annual enrolment of doctors tenfold and overhauled the pharmaceutical supply system. These reforms are delivering results. And yet access to quality essential health services is still lower in Africa than any other region.

Today, 114m people in Africa live in poverty because of healthcare costs. These gaps not only imperil the health of millions; they also threaten Africa’s growth and prosperity. That is why the World Health Organization has made universal health coverage its top priority. No one should get sick and die simply because the health services they need are either unaffordable or inaccessible.

At the UN in 2015, world leaders committed to achieving universal health coverage by 2030 as part of the Sustainable Development Goals. Since then, we have seen several countries making important strides. Kenya has embarked on an ambitious universal health coverage scheme, while South Africa passed a new National Health Insurance bill last year designed to reduce the searing inequalities in that country.

These countries are proving that universal health coverage is not a luxury that only rich nations can afford — it is a political choice. In February, leaders at the African Union Summit in Addis Ababa undertook to mobilise domestic resources to invest in primary healthcare and universal coverage.

The six-member states of the East African Community and the Democratic Republic of Congo are also, for the first time, working on a regional plan to tackle malaria and exploring ways to increase funding to fight the disease. At the UN General Assembly this month, world leaders will converge for the first high-level meeting focused on universal health coverage.

Now is the moment for a new era of partnership among governments, donors, philanthropists and the private sector, building on past successes. Much work remains to be done to close the gap between Africa and the rest of the world.

But with a political commitment to universal health coverage and the right investments in strong health systems, the future of Africa is not just healthier, it is also more prosperous and more powerful.