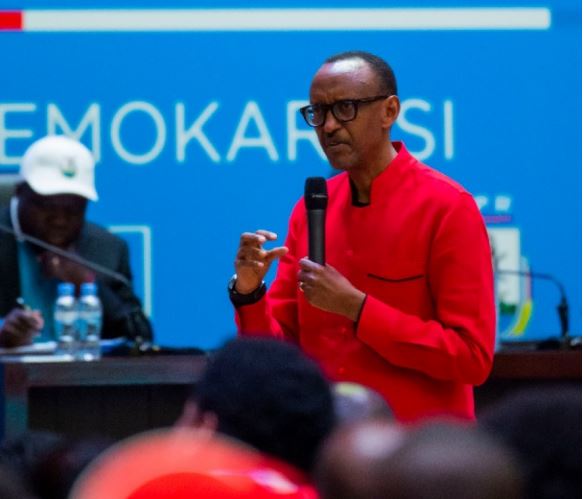 President Paul Kagame and chairman of the ruling party Rwanda Patriotic Front (RPF –Inkotanyi) says party members and Rwandans in general should not settle for mediocrity by aiming to do things that might appear impossible and unachievable to some as the country has done over the last 25 years.

The RPF Chairman was addressing more than 2, 400 party members and other invited guests at the 14th RPF Congress at the party headquarters in Rusororo in the day-long meeting which took stock of the achievements over the last two years since the last party congress and set the country on the path for Vision 2050.

During the highly interactive and open session, President Kagame warned party members and Rwandans against settling for less, something he said goes against the very principles that RPF was founded on.

The party head said that the history of RPF Inkotanyi shows that the party was built from scratch, literally on nothing, but with a mindset of building something big out of nothing –which is why the party has been able to achieve a lot over the last 25 years it has been at the helm.

However he said that in recent years party members seem to be becoming complacent and forgetting the very principles that party was built on by doing things half-heartedly in a manner that does not serve Rwandans well.

Among other things, President Kagame said that certain cultures have cropped up in recent years where party members fear to report wrongs happening within the party ranks or the government, fearing the consequences of reporting their compatriots.

Citing an example of corruption, he said that in some cases cadres know what is going on and in which institutions but they shy away from reporting in order not to be seen as trouble causers.

The head of state said that the practice is a bad one and can easily have a negative impact on the party and society just because people fear reporting each other, in the end tolerating wrongs even at the expense of the citizens.

“Those are not RPF values. No RPF Member should shy away from fighting wrongdoing. If you see something done the way it shouldn’t be, fight it fearlessly. Never get tired of fighting against what is done wrong,”

“If you know that someone is diverting public resources for their own interests, what are you fearing reporting that person? What kind of fear is that? Whichever way you look at it, there is nothing that can justify stealing public resources while others are watching and not acting,” the RPF Chairman said.

He said that those who watch other steal and do nothing to stop them are as good as the people stealing, adding that there is no need to fear a thief. He said that such practices are not in line with the principles and values RPF stands for –the values which saw people sacrifice their own lives to gain a country.

Reminding members of the genesis of the liberation struggle, President Kagame said that injustices that saw many Rwandans denied to live in their own country and all the band things that were being done by the then government led to RPF picking up arms to fight the government at the time.

He however said that if similar practices emerge in the current set up, it won’t be different from the same people they fought to dislodge, adding that these are not the values worth passing on to young people who are soon taking over reins at the party or government. 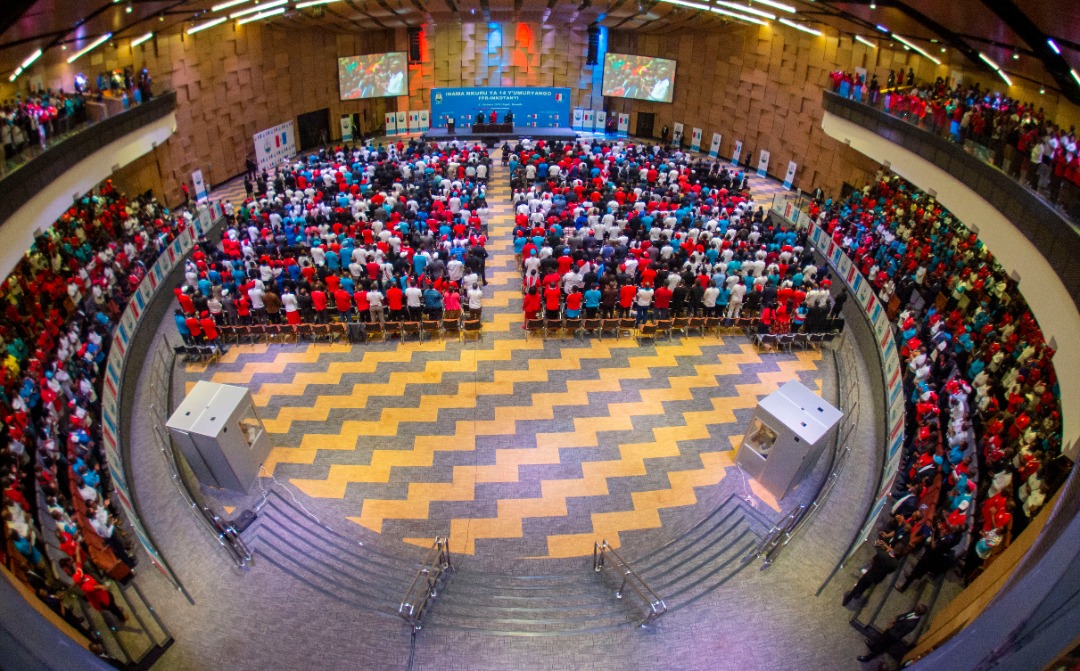 He said that if such issues are not tackled head on in meetings like the congress, they are likely to be postponed or covered up and become an unacceptable culture.

“People sacrificed their lives for this country and you are talking about fearing the opinion of thieves? People made far greater sacrifices for us to be here, including the most precious one, losing their own life,” President Kagame said.

President Kagame said that RPF is now 32 years old, which means that is as old as an entire generation where people who were born at the time RPF was born or slightly older than the party will soon be assuming office and should not be learning some of these practices.

Reacting to presentations by the party Secretary General Francois Ngarambe and Commissioner of Ethics and Discipline, Prof Chrysologue Karangwa, Chairman Kagame said that while it is good to highlight party achievements in line with the manifesto, it is important to put matters in perspective and spend more time on areas which are not performing as expected.

Mr Ngarambe said that over the past two years, the party embarked on revamping its structures from the village to the national level and mobilised new party members, while it also followed up on what was being done in line with 2017 manifesto.

He said that significant gains have been made in the areas of infrastructure, among other things including the development of ports on Lake Kivu, construction of more roads while RwandAir continues to expand and opening up new routes.

SG Ngarambe said the economy is on the right track and set to surpass the projected 8 percent growth rate while agriculture, education, health and other sectors have also registered positive trends though challenges remain along the way.

President Kagame advised party members to give meaning to numbers that reflect growth whenever talking about development for those who might not understand or detractors who always want to question Rwanda’s numbers or misconstrue the truth.

“When we say 12 per cent growth, they’re not just numbers, they reflect people, and how their lives are being affected,”

“When we say that our economy has been growing, we should ask ourselves questions like; do more people now have clean water? Do they have electricity? Do citizens have access to banking services, bank loans at good rates?” President Kagame said.

He said that in some places, calculating GDP per capita attributes wealth to people still living in abject poverty and the numbers end up being inaccurate.

“We want our numbers to reflect the reality. Our security and stability results from the fact that our development numbers reflect the reality of our people’s day-to-day lives. Our citizens should have something in their pockets and be able to put food on their table,” he said.

“Development doesn’t only mean moving from walking barefoot to wearing shoes. It means reaching a level where you are able to make the shoes you want to wear,” he added.

President Kagame took time to speak about the party’s businesses and assets, saying that he has never been apologetic about the RPF doing business, giving a genesis of how RPF Inkotanyi ended up in business, particularly by investing in areas providing services that were lacking yet needed.

He said that often he is asked about the idea of RPF being in business, whether it can’t result into a conflict of interest, or affect the private sector and other unfounded concerns and he asks the same people to give him proof of where an RPF company got a tender because it is an RPF company.

“We have never stolen anyone’s money nor do our companies get favours because they are RPF companies. Nobody can give us any evidence of that. We do business like anyone else, in areas where no one was willing to invest,” he said, giving a historical background of how the party decided to venture into business, starting from almost nothing.

He said the party ventured into areas where investors were not coming in fast yet the country needed certain services –a philosophy the party hard way before it came into power.

During the congress, the status of party businesses and assets was discussed at length with President Kagame urging for more comprehensive and efficient management to make the entities more productive and profitable. 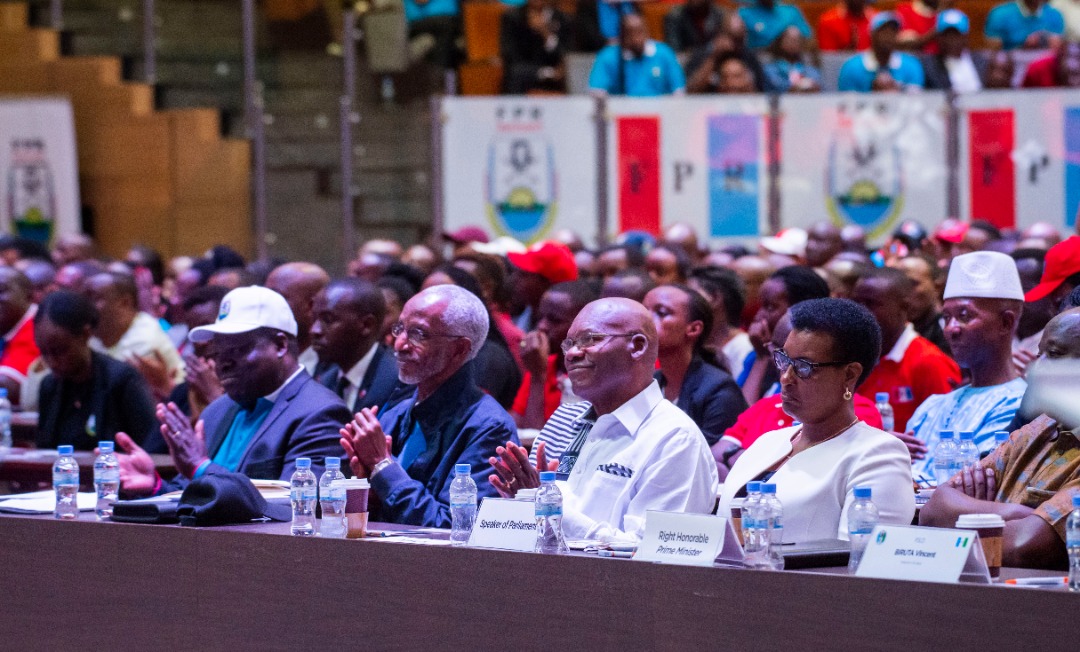 No topic was secret and nearly all sectors were touched. The President of the Senate Augustin Iyamuremye, a member of the Social Democratic Party (PSD), who said that it was his first time to attend an RPF congress, said that he was surprised by how transparent the discussions were and how no stone was left unturned.

The seasoned politician who also served in the previous government said that he was asked many times if it was a wise decision to serve under the RPF-led government and he always told them that he has never doubted his choice.

“It was a good choice. RPF Inkotanyi never thought of keeping all the power and leadership to itself even when it had all the means to do so. What is most striking for me today is the transparency with which you carry out your party activities,” Dr Iyamuremye said, speaking on behalf of other invited parties.

As a veterinary doctor, he said in race, for one to win, you must pick the very best horse, equating his personal choice to work with RPF Inkotanyi to picking the best horse for the race.