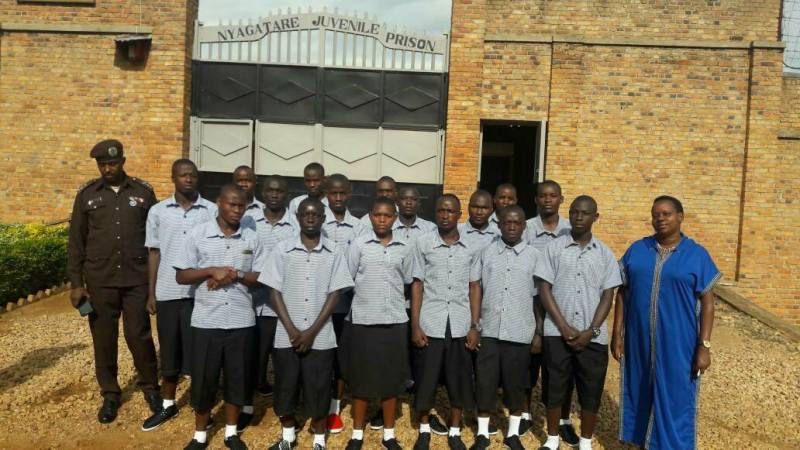 Earlier beneficiaries of the presidential amnesty at Nyagatare juvenile prison

A cabinet meeting chaired by President Kagame made the decision to release the 18 who were serving different sentences in the Eastern Province-based rehabilitation and correctional centre.

“Pursuant to the powers conferred upon him by the laws, His Excellency the President of the Republic of Rwanda informed the Cabinet meeting of pardon granted to 18 youth who were serving sentences in Nyagatare prison that displayed good conduct and scored highly on the national examinations,” a cabinet statement signed by the Minister of Cabinet Solange Kayisire reads.

The Minister of Justice and Attorney General Johnston Busingye told KT Press that the decision is informed by the behaviour of juvenile convicts, particularly those who excel in national exams.

“Good conduct and good performance in exams,” Busingye said as the two conditions that are based on to set free the convicts as one of the ways to give them a chance to redeem themselves and become useful citizens.

Minister Busingye also explained circumstances under which the presidential pardon can be revoked, including recidivism and failure to obey Prosecution requirements.

“The circumstances include conviction for another offence during the currency of the time and not abiding by conditions of release such as failure to continue exhibiting good conduct,” Busingye said.

Other conditions include failure to present self at the nearest Primary Level National Public Prosecution Authority (NPPA) office within 15 days of release and appearing there once a month.

Since 2014, Rwanda Correctional Services (RCS) and Rwanda Education Board (REB) launched an initiative that would allow juvenile inmates to sit for national examinations as one of the ways to rehabilitate them while giving them a new lease on life.

The RCS Spokesperson SSP Hillary Sengabo said that the decision is effected immediately, as soon as the pronouncement is made.

“We will release them today. We give them transport to their families while others are picked up by their family members,” Sengabo said.

The highest sentence carried by one of them was 10 years while others carried lesser sentences.

Out of those released, Sengabo said that 13 completed Primary, including 11 boys and 2 girls while those who completed O’ Level are 5 boys, bringing the total to 18.

The facility accommodates inmates aged between 14 and 18 who are charged and convicted o different crimes. The centre has a Primary and Secondary as well as a Vocational centre that equips Juvenile inmates with different skills.

The centre accommodates 548 juveniles and is supported by several partners including UNICEF and Dignity in Detention (DiDe) among others, who provide financial and technical support.

Last year, 18 inmates sat national exams, with 12 sitting National Primary Leaving Exams. 4 passed with grade one while 8 were in division two. Those in vocational studies are trained in construction, wielding, hair styling and carpentry among other skills.

When released, they are given start up materials in line with the skills gained at the facility in a bid to help resettle them.

Every beginning of the year, the President of the Republic pardons child inmates in the facility. Last year, 16 young men and women were granted clemency while in 2018, 18 more were granted a presidential pardon and a similar number in 2017.

In other developments, the Cabinet meeting approved 42 applications for mineral and quarry licenses. In other decisions, the cabinet approved Presidential order granting leave of absence for a non-specific period to Dr. Jean Pierre Nyemazi, who was Permanent Secretary in the Ministry of Health.

In the appointments, the cabinet appointed Prime Ngabonziza the Director General of Rwanda Water Resources Board while Dr. Ivan Twagirashema, who was the CEO of Ngali Holdings was appointed the Deputy Chief Executive Officer of Rwanda Mines, Petroleum and Gas Board.

The Minister of Infrastructure Claver Gatete informed Cabinet that the Africa Drone Forum is scheduled to take place in Kigali at Kigali Convention Centre (KCC), from February 5th to 7th 2020.

It will be followed by the Lake Kivu drone flying competition, scheduled from February 8th to 15th 2020 in Karongi District.

According to Rwanda Civil Aviation Authority (RCCA), the event is premised on the potential for growth and sustainability, focus on using drones for social good, and the economic empowerment of African communities.

It’s a partnership between the World Bank and the Government of Rwanda. It is expected to convene 1000 participants.

Participants will be involved in a knowledge sharing and networking conference, exhibition of the latest drone technologies and a competition termed as the Lake Kivu Challenge of already selected tech companies with latest innovations.

Each finalist will participate in a live pitch and award ceremony on Thursday, February 6 at the ADF. The 10 finalists will compete for a share of £40,000 in prize money.

No Rwandan drone company is in the finals. They were selected from a competitive pool of almost 150 submissions from across 31 African countries.