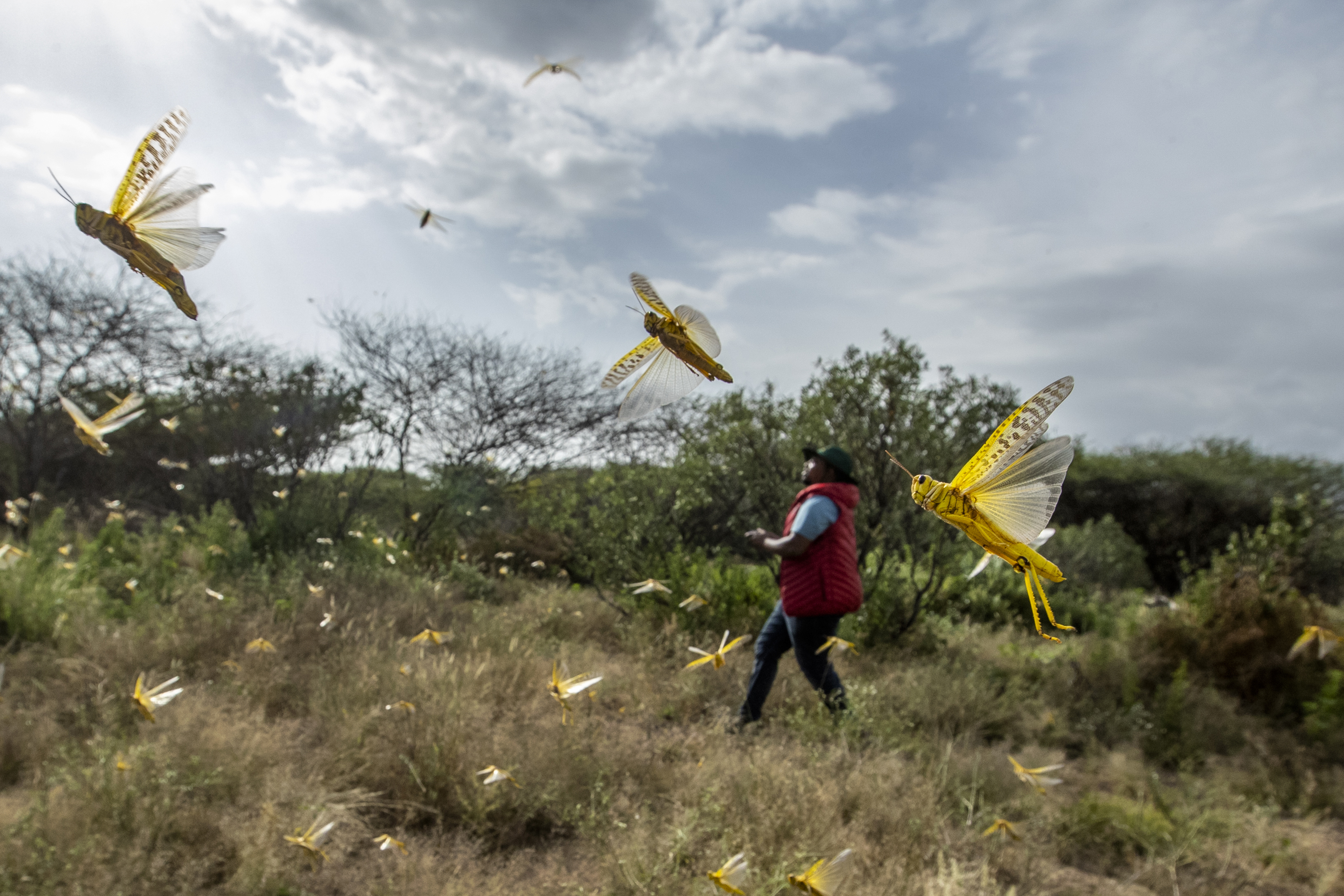 In this photo taken Saturday, Feb. 1, 2020, desert locusts jump up from the ground and fly away as a cameraman walks past, in Nasuulu Conservancy, northern Kenya. As locusts by the billions descend on parts of Kenya in the worst outbreak in 70 years, small planes are flying low over affected areas to spray pesticides in what experts call the only effective control. (AP Photo/Ben Curtis)

Rwanda has started preparing for the next wave of desert locust which are expected to hit the east African region between June and July this year, which is likely to be massive compared to the one seen in February.

To be prepared, the Food and Agriculture Organization (FAO) Rwanda office through its Regional Commission for Controlling Desert Locust in the Central Region (CRC), has trained 20 agriculture experts on desert locust survey and control operations.

The weeklong training, which ended yesterday, covered lessons on desert locust biology, surveys, and control operations, is part of FAO’s support to the Government of Rwanda’s existing preparedness plan on locust.

These skills will enable the trained experts to act as trainers of trainees with hand-on intervention skills and engaging all in the fight against desert locusts, especially farmers in local communities at the villages, cells, sectors and district levels.
The week-long training also conducted simulation exercises in Nyagatare district, Eastern Province that was under a high alert to the invasion of the locusts because of the microclimate conditions (temperature) and soil type found in this district and some locust-like insects sighted in the area creating a temporary panic among farmers.

FAO communication office said that the key farmer’s regions to be trained will be the northern and eastern province but all farmers in the rest of the country will be reached later on.

One of the trainees, Jean Claude Izamuhaye, the Head of Department, Crop Research and Technology Transfer at Rwanda Agricultural Board (RAB), said that the acquired skills will complement existing ones.

“The training was more hands-on and we look to transfer this knowledge to other technicians at different levels. With this training and other existing activities, we believe that if the desert locusts invaded our country today we will be able to defend Rwandan farmers,” Izamuhaye said.

Early this year hundreds of billions of locusts swarmed through parts of East Africa in the worst invasion for a quarter of a century, threatening crops and livelihoods.

The spread of the locusts was recorded in the neighboring countries such as; Uganda, Kenya and Tanzania, raising Rwanda’s preparedness and readiness to keep the pest at a bay.

Although the country hasn’t reported any invasion of Desert locust, the country has to prepare for the potential threat, FAO Representative, Gualbert Gbehounou, said Rwanda was on the right track.

“Rwanda has put in place real efforts to anticipate any possible events of the locust attack as it was witnessed at the start of the year when the first threats were recorded. We (FAO) will provide all possible means of support in order to achieve full preparation for the confrontation with desert locust,” Gbehounou said.

In an earlier statement on the locust alert, Rwanda’s Minister of Agriculture and Animal Resources, Dr. Geraldine Mukeshimana said that the country was in a position to tackle the threat.

“If they do not spread to Rwanda, well and good. But, in case they cross the border, people should get ready to fight them as they did the fall armyworm,”

In a March “Desert Locust situation update”, FAO said the locust situation remained “extremely alarming in the Horn of Africa”, specifically Kenya, Ethiopia and Somalia where widespread breeding is in progress and new swarms are starting to form, representing an unprecedented threat to food security and livelihoods at the beginning of the upcoming cropping season.

In Rwanda, Government has put in place a desert locust preparedness taskforce run under the Prime Minister’s office, which is equipped to mitigate and has received FAO technical support. The task force is still active despite a large focus given to Covid-19 prevention.

Teopista Mutesi, the Communication Officer-FAO Rwanda said that the likelihood is high and in big numbers especially in generally hot climates, but Rwanda is not under a high threat though has to be prepared.

“The numbers of farmers to be trained cannot be estimated but all farmers should report any case to the nearest sector agronomist who also works with Rwanda Agricultural Board (RAB), said Mutesi.

FAO also stated that they have since the beginning of the year, been collecting locust data, using helicopters but because of Covid-19, the operations had to be halted temporarily in Kenya and Ethiopia.

Stay At Home, Fight The Fat And Covid-19