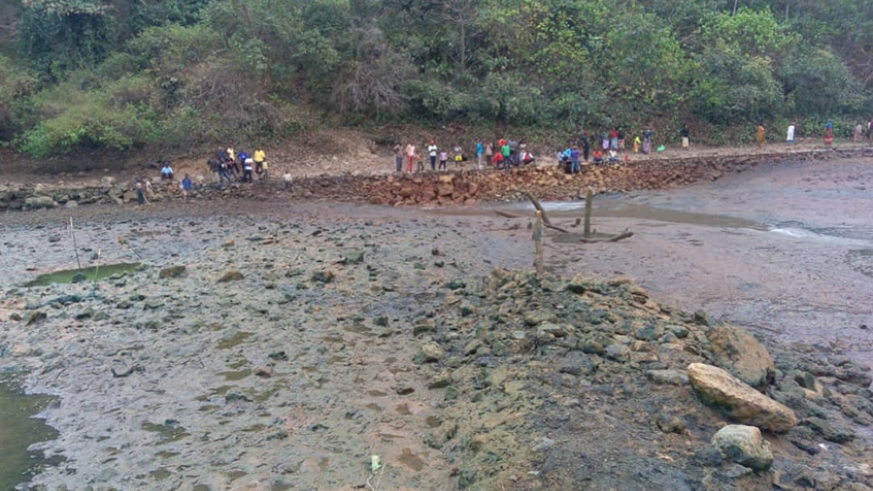 A team geologist and environment experts led by Rwanda Mines, Petroleum and Gas Board (RMB) has concluded its finding on the cause of the sudden disappeared of tourist hot springs in Rusizi district.

The team was last week, dispatched to Nyakabuye sector, Rusizi district after media reports of dried up hot springs in the area which picked government attention to have a subsequent investigation taking into account recent seismic and blasting activities in the area.

In their findings the team of seismologists, mining engineers, geologists and geo-physicists, has said that the disappearance was not caused by recent earthquakes but the nature of the springs and blasting activities in the area.

The affected area witnessed a high magnitude earthquake around July 13, 2020.

This was earlier suspected to have caused rocks underneath to shake and get separated by earth tremors to the extent of giving hot springs a way to infiltrate underground and disappear on the surface.

Team leader, Jean Claude Ngaruye, Mining Exploration Division Manager at RMB told Kigali Today that if the vanishing of the hot springs was caused by earth quakes the water sources in the area would be equally affected.

Ngaruye said that the team found out that the source of the hot springs are still intact and had a capacity to pour 15litres per second, however what happened (to the drained springs) was caused by the softening of the rock surface of the source of the spring.

Ngaruye said that in the first case the hot springs surfaced in lake form appearing in three areas- that is at a Cimerwa blast site in Bugarama, and two other areas near a prayer site and in Gakono zone.

He said that the hot springs which surfaced were blocked at the Cimerwa cement blast site to reduce water damaging the raw limestone, thus forcing the water to find out porous routes in the rocks.

“Since the springs contain chemical elements, they, with time, had to find its way out elsewhere by perforation, through the weakened the rock surface that was holding it, thus drying out at the hot springs on the surface,” Ngaruye said.

Ngaruye explained that this was an 80% natural process of the hot springs and had nothing to do with changes tectonic plates as anticipated earlier, after the July earthquake which hit the Tanganyika region.

This means that the ‘pool-like’ hot springs seen near the Cimerwa area are the only ones that dried up while other areas remain intact with springs.

In order to see that hot springs again, Ngaruye said that the natural process has to be back up with environmental activities spearheaded by local authorities.

Ngaruye advised that the districts embark on removing the mud clog and clay soils found at the Bugarama hot springs and construct a modern pool ( with a strong rock surface) where the hot springs can be used as touristic attractions.

The Rusizi district based hot springs are one of the tourist attractions in the area.

Soaking in hot springs is proven to be a great way to naturally detox your skin and the mineral content of sulfur springs has been shown to help persisting skin conditions like psoriasis, acne and eczema.

Covid-19, Rwandans Have Learnt to Forego ‘Hobe’, Can They Learn To Queue?