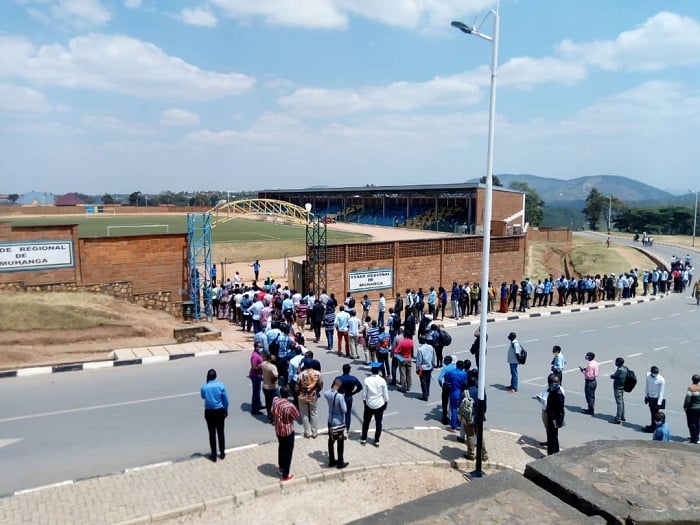 At the scorching sun, a mother who had come with his one-year-old baby to write the exam for the executive secretary told Kigali Today: “I was discouraged when I saw this crowd for the only six positions. We need more than this.”

The mother of one said that the government may need to support private initiatives so that the private sector flourishes to be able to create more jobs.

Another candidate said that he was not able to finish the exam under the scorching sun.

“The public service will not help. We need mechanisms that may help us create our own jobs, otherwise we won’t manage,” he said.

Ladislas Ngendahimana, the Secretary General of The Rwandan Association of Local Government Authorities (RALGA) which prepares the exams agrees that, “there has never been such big numbers; for the executive secretaries, 2551 were shortlisted but around 700 sat the exam which is still quite a big number.”

Ngendahimana does not attribute this to an issue of unemployment which, the government said three years ago, it stands at 13.2%.

“These are managerial positions which requires the candidates to have experience. It is rather a sign that the qualified labor is increasing,” Ngendahimana said.

He also believes that:”the labor market is gaining confidence in the public service and the country is really united; it means that the numbers are not from Southern province. If people can come from across the country to sit an exam whose position would lead them to a province different from their birthplace, this should also be seen as a positive sign.”

Jacqueline Kayitare, the Mayor of Muhanga district also has a similar belief that “the community is hungry to contribute in the civil service.”

Ngendahimana said, that within a month, candidates who qualify for the oral exam will be available.

The labor law provides that candidates who get 70% in the final exam can be put on a pending list and, if a vacant post is available within six months, they can be employed.

“It is a databank which is managed by the Ministry of Public Service and labor,” said Ngendahimana.