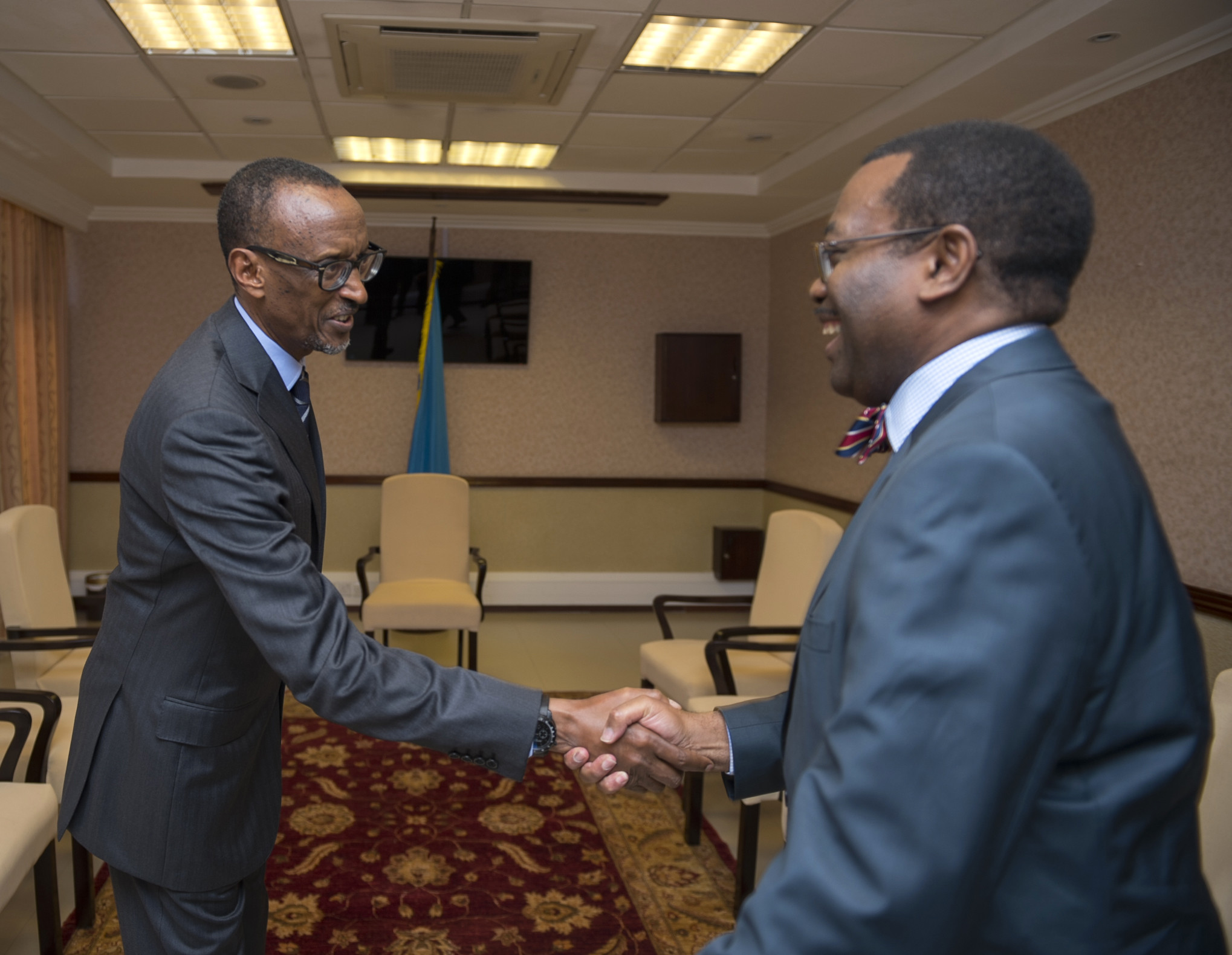 President Kagame meeting Dr Adesina at a past event in 2016.

President Kagame has given his full support to the re-elected President of the African Development Bank (AfDB), Dr. Akinwumi A. Adesina, saying that the continent will rally behind him to lead the bank through the New Coronavirus period.

President Kagame, who participated in the virtual swearing-in of the Nigerian technocrat who will lead the continental bank for the second term, said that the financial institution plays a key role in ensuring that Africa recovers from the pandemic.

“I am delighted to personally take part in this ceremony to mark the start of Dr Adesina’s second term as President of our bank, the African Development Bank,”

“He has led the bank with integrity and purpose for the past five years, with signature initiatives on agriculture, energy, infrastructure, education, and of course digitalisation, which links all of them up,” President Kagame said.

The Head of State said that the next five years, with Dr Adesina at the helm, promise to be even more noteworthy.

“Dr Adesina, you have our full support as you continue to lead the African Development Bank through this COVID-19 period, marked by turmoil, but also the prospect of new opportunity for our continent,”

“The African Development Bank has played a key role in ensuring that Africa’s interests are reflected in the international agenda during this crisis. For this, we are appreciative,” he said.

President Kagame wished Dr. Adesina, who was re-elected to serve a second five-year term as President of the bank on Thursday, August 27, by the Board of Governors of the bank, success in his endeavours as he was sworn-in in Abidjan, Ivory Coast on Tuesday. 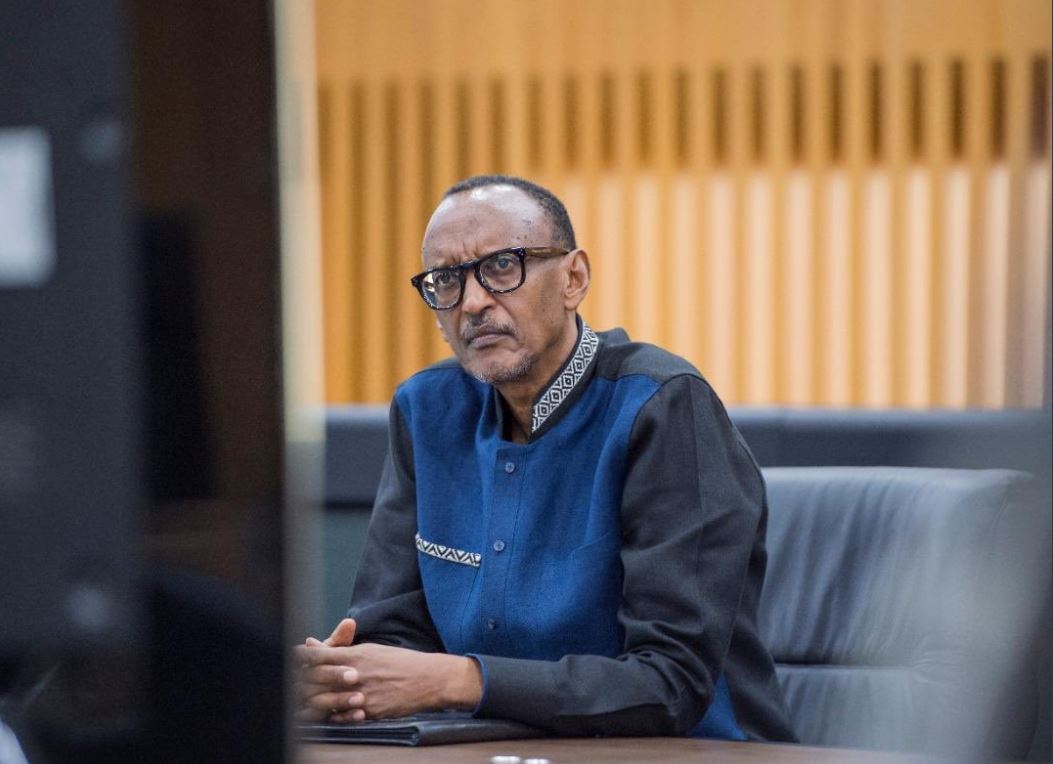 President Kagame participating in the virtual swearing-in ceremony of the AfDB President on Tuesday.

In his speech, Dr Adesina said that he was grateful for the opportunity to serve Africa passionately, to the very best of his God-given ability. He thanked African Heads of State and Board of Governors for the support that saw him re-elected to office.

“Four days ago, on August 27, 2020, I was re-elected as President of the African Development Bank Group. I wish to thank you all for your incredible support and for the mark of confidence you all collectively placed in me,”

“You elected me with 100% of all the votes of regional and non-regional shareholders of the Bank — without any exception. This is unparalleled in the Bank’s 56-year history. And for this, I am exceedingly grateful,” he said in his acceptance speech, terming his re-election as an honour and a sign of confidence.

Dr Adesina said that over the past five years he has been in office, together with the shareholders, they have collectively charted a new way forward for Africa; one that has given stronger hope for the continent’s development.

He said the AfDB has delivered on ‘The High5s of the Bank (Light up and Power Africa; Feed Africa; Industrialize Africa; Integrate Africa; and Improve the Quality of Life of the people of Africa) which were developed to accelerate the delivery of the Ten-Year Strategy.

He said they have been implemented with ‘deliberateness, speed and rigor’.

“The High5s have taken hold on the continent and become the keys for accelerating Africa’s development. The UNDP has shown that achieving the High5s would lead to achievement of 90% of the SDGs and the Agenda 2063 of the African Union,”

“Over the past five years, the Bank has delivered impressive results on these High 5s,” he said, adding that 18 million people have been given access to electricity while 141 million people gained access to improved agricultural technologies for food security.

“We’ve achieved impressive results. The Bank’s High5 programmes have impacted 335 million people. That’s what the African Development Bank – your Bank – is all about … ‘people impact’,” the AfDB President said. 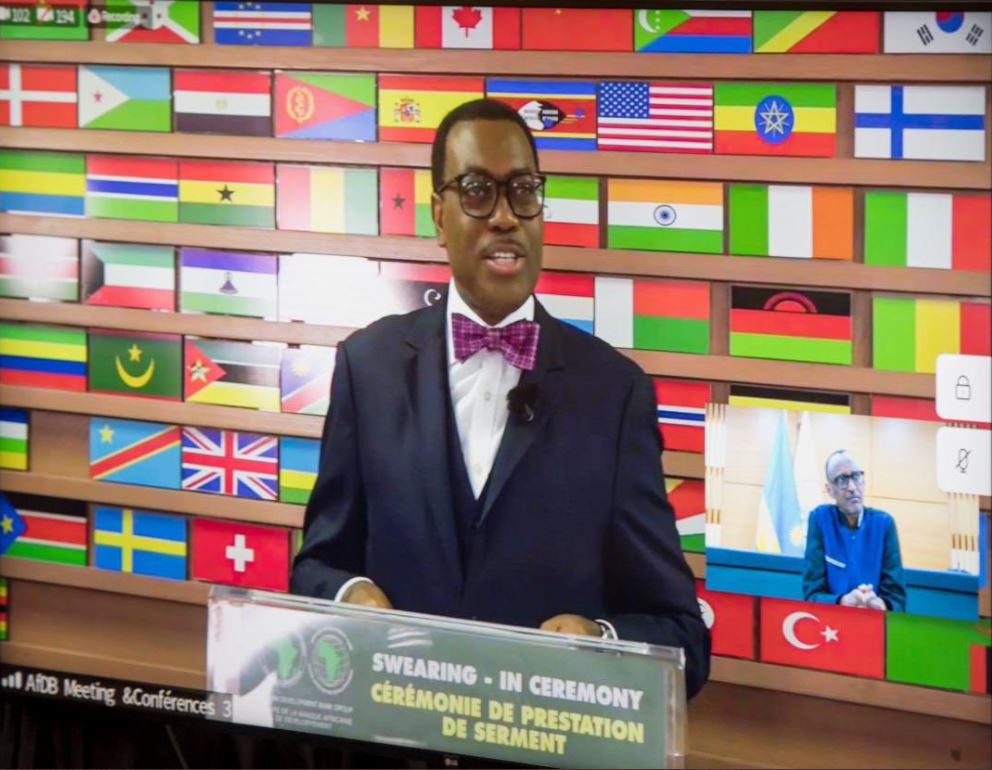 Dr Adesina at the swearing in ceremony.

“Through the innovative and ground-breaking Africa Investment Forum in 2018 and 2019, we were able to attract a combined $78.8 billion worth of investment interests into Africa,” he said.

Dr Adesina said that in every country, the Bank’s impacts are felt. He said they expanded their presence to 44 countries, including across fragile states.

“He said that since COVID-19 shocks began, the Bank’s Board of Directors approved a $10 billion COVID-19 response facility to address immediate and project investments for countries, especially to contain fiscal meltdowns.

“We launched a $3 billion social bond on the global market – the largest US dollar denominated social bond ever in world history,”

“These actions reflect our ambitions, our unshaken commitment and unyielding responsibility to support, stabilize and strengthen African economies,”

He said the COVID-19 pandemic has changed everything globally and thrown Africa’s growth back. Dr Adesina said the continent has lost gains and economic growth that were achieved over the last decade.

“Africa’s recovery will therefore be long and challenging. Now, we must help Africa build back boldly, but smartly, paying greater attention to quality growth: especially in the areas of health, climate and the environment,”

“As we look to the future, working with the Board of Directors, the Bank will pay increased attention to supporting Africa with quality health care infrastructure, and building on its comparative advantage in infrastructure,” Dr Adesina said. 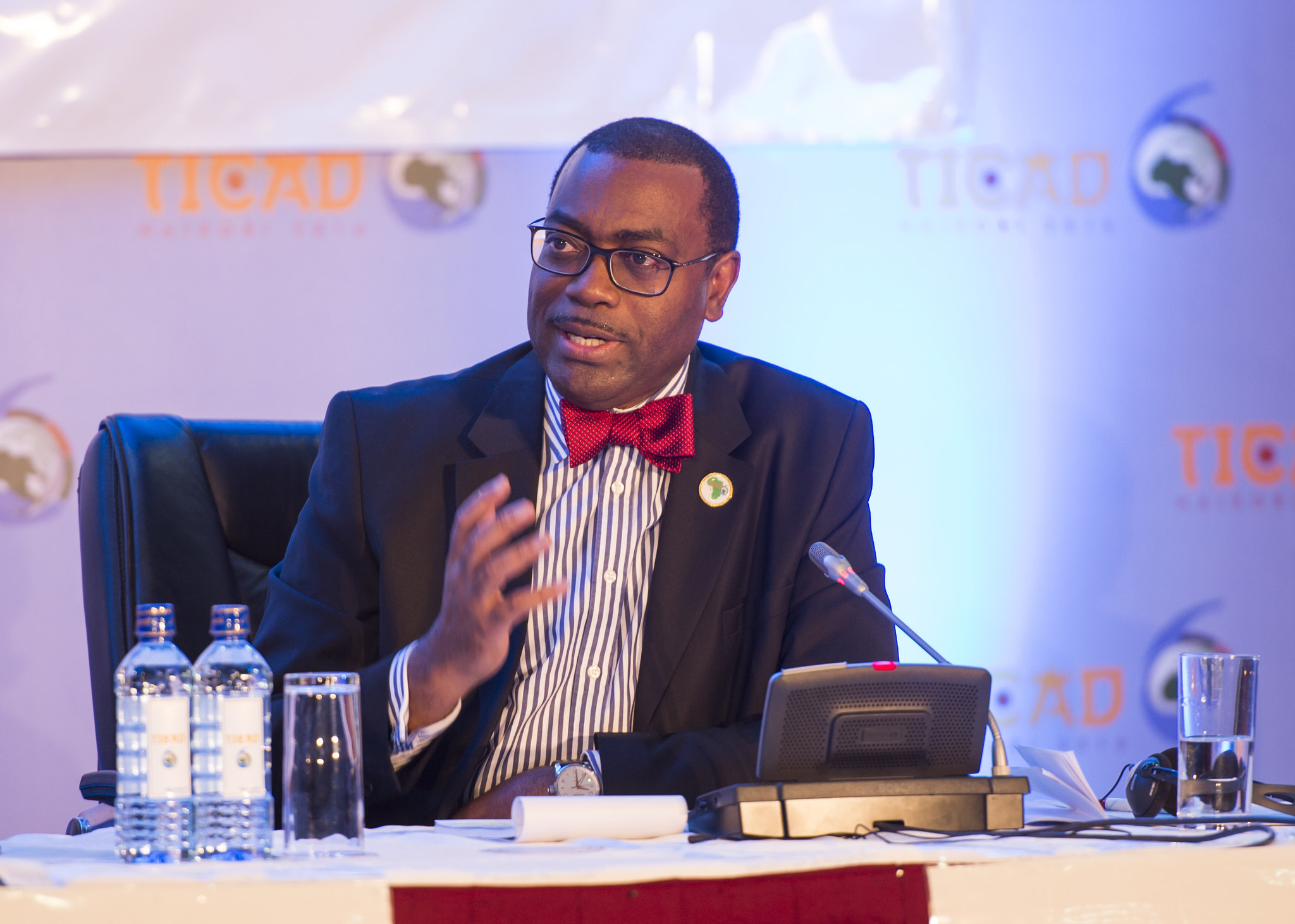 Thanks so much Your Excellency my dear brother and friend, President @PaulKagame for attending my swearing-in ceremony today and for your kind words. I am greatly honoured. I appreciate your strong support. Together, we will fast-track Africa’s development. ?? https://t.co/1UCayIRXmz