The First Lady Jeannette Kagame and Chairperson of Unity Club Rwanda has called on Rwandans to take the ‘Ndi Umunyarwanda’ concept as a basis for rebuilding the country that was torn apart by the 1994 genocide against Tutsi.

Mrs. Kagame was this morning addressing the 13th Unity Club Forum (UCForum) 2020, themed “Ndi Umunyarwanda:  Igitekerezo-ngenga cy’Ukubaho kwacu”- literally translated as “I am Rwandan: A fundamental idea of our existence”- which was the same theme in 2019.

The Club was founded back in 1996 by the First Lady of Rwanda, Jeannette Kagame and it brings together current and former Government Officials, as well as their spouses.

“Ndi Umunyarwanda” (I am Rwandan), is a programme initiated by Government through the National Unity and Reconciliation Commission (NURC) to promote national identity based on trust and dignity.

Mrs. Kagame said that Rwandans and members of the club have gone through a sour history but choose to be one person, accepted to swallow the sour medication which in turn enabled Rwandans to carry on the light of being Rwandans as a foundation of the country’s existence.

She said that the journey is still ongoing thus the need for meeting every time to discuss and access progress made in this regard despite surfacing of voices of denial of this history- which may be done for personal reasons, or as a result of giving up and indifference especially on the progress attained in the country.

With these challenges at hand, Mrs. Kagame said that there is a critical need to focus on educating young Rwandans who didn’t play a role in the genocide but are still struggling with a sense of belonging as a result of infiltration of genocide ideology by their families.

“Such a forum should be a reminder that we are Rwandans and will always stand by this, but also use this opportunity to pass it on to young ones, especially those who are struggling with a sense of belonging,” Mrs. Kagame said.

The First Lady insisted that to attain this objective, the involvement of the family as a core of rebuilding the country and its Ndi Umunyarwanda identity, must be a focal point.

“We cannot speak of Ndi Umunyarwanda without the family because it is the basis of raising a person with human values, to live with others and love their country,” Mrs. Kagame said. 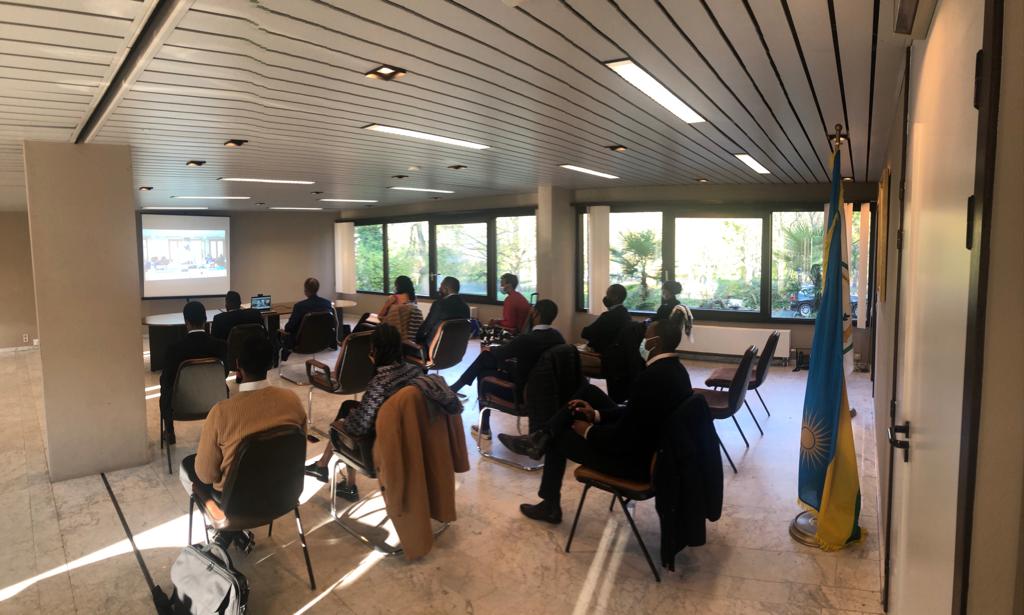 Rwandans in Belgium following Unity Club forum from the embassyShe also challenged parents to think of how they can educate youths to realize that being a Rwandan is a greater relation than any other, to change mindsets which don’t bring Rwandans together with a common goal and vision, but resentment and denial of progress made.

Though research conducted by the unity and reconciliation commission shows that the families are at the forefront of perpetuating genocide ideology, Mrs. Kagame also challenged Rwandans to use Ndi Umunyarwanda concept to rebuild their families to be a source of sustainable peace and development.

For one to be a good Rwandan and a light to others, Mrs. Kagame advised that they should focus on being dedicated, perception, accountability, self-discipline and belief, confidence, modesty and humility, emotional intelligence, patience, honesty and doing a job well.

“Let Ndi Umunyarwanda be our constitutional idea, shield for the young ones and our protection that drives us to make Rwanda a peaceful place. Our wish as parents should be to pass on the Ndi Umunyarwanda legacy which is above all,” Mrs. Kagame said in her digital message to the forum.

Due to the Covid-19 pandemic, this year’s UC Forum was also held in different sites located in Kigali city and four provinces and unlike in past forums, the event was not able to recognize with medal of “umurinzi w‘igihango” (medal of heroism) awarded annually to individuals who have played a significant role in building unity and reconciliation.

Participants and panelists at the forum emphasized the need to put more efforts in educating and training parents and use of social media to promote unity and reconciliation.

Senator Emmanuel Havugimana said that the biggest challenge for youth in Rwanda is to carry on a bad history in which their parents were involved. He gave an example of someone who sent a message (SMS) to a local leader saying they will do more than what their parents did in genocide.

“There is no other solution to changing this but Ndi Umunyarwanda. Whoever comes with anything apart from this, wants something else. My dream is that our children grow in a country with a different history from ours,” Havugimana said.

Patrick Kurumvune, a son of genocide convict confirmed this saying he had the same feelings of resentment whenever he thought of the basis for his father being in jail for genocide, but with time and being exposed to different lessons and opinions he realized that it was not his making.