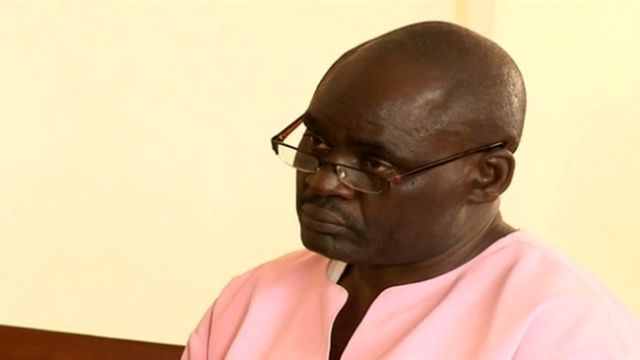 The Court of Appeal in Kigali has upheld a life sentence handed to genocide convict Pastor Jean Uwinkindi five years ago.

Uwinkindi was arrested on June 30, 2010, in Kampala, Uganda and transferred to the United Nations (UN) detention facility in Arusha, Tanzania.

In November 2010, the International Criminal Tribunal for Rwanda (now a UN residual mechanism court) requested his referral to Rwanda and was on June 29, 2011, transferred to Rwanda becoming the first Rwandan Genocide suspect to be referred to Rwanda.
Uwinkindi was in 2015 sentenced to life in prison for his involvement in the 1994 genocide against Tutsi and crimes against humanity which he committed as a pastor at a Pentecostal Church in Rwanda (ADEPR) in the former Rural Kigali Prefecture (now Bugesera District).

Uwinkindi immediately appealed the High Court ruling to the Court of Appeal after he was sent to jail.
This Thursday Uwinkindi appeared in the Appeal Court seated in the Mpanga prison where he has been serving his sentence for the last five years, to listen to the final decision on his appeal.

For more than four hours the court judges examined his plea in which he indicated that the earlier court decision was based in crimes he didn’t commit, that he didn’t have consent over the defense lawyers appointed in his case.

Uwikindi also stated that he was not given enough time to prepare his defense and collect testimonies to exonerate him. He said the testimonies that pinned him were doubtable among other issues he raised on legal proceedings.

The court found for example that on the issues of lawyers appointed by the Rwanda Bar Association, Uwinkindi had a chance to get two initial lawyers to defend him and in his statement (as recorded by court) he didn’t complain about it, since it was done on grounds that he was not able to financially afford lawyers.

The court said that this was in line with the obligations of the judiciary to accord lawyers to whoever request for this assistance and on human rights grounds as required by the UN tribunal for Rwanda (ICTR) at the time of his referral.

The court also acknowledged that during the Uwinkindi trial back then, the initial team of two lawyers dropped from the case on grounds that they were not offered Rwf103million to investigate and collect testimonies in favour of their client, and instead were offered more than Rwf800, 000 to effect, however didn’t account for the money.

In due course, the court read that Uwinkindi was given two new lawyers to represent him in court but the clients and lawyers were not able to agree on modalities of investigations.

In an examination of the issue of testimonies, the court read that the testimonies given to ICTR and the High Court in Rwanda had similarities that placed Uwinkindi to genocide activities including meeting, planning roadblocks and giving direct orders to kill Tutsis in Kanzenze area especially at a mining spot near the ADEPR church in Kanzenze.

From the testimonies of Kanzeze citizens, he court also said that Uwinkindi worked with the former Mayor- Bourgmestre Gatanazi to manage all genocide activities and some of the meetings he attended in person and was put in charge of execution.

Testimonies said that Uwinkindi, as a pastor, had power to put an end to the planned genocide activities at the ADEPR church but he kept a blind eye and silent month – which is evidence that he backed the plans.

However Uwinkindi in the appeal statement stated that the testimonies were collected from citizens who cannot read and write and wondered how they could have signed on the written testimonies, thus suggesting the testimonies were made up and should be trashed since most of the witnesses had incoherent dates and venues mentioned therein.

The court of appeal said that the fact of testimonies being of persons who cannot read or write didn’t remove the fact witnesses had evidence of what happened in Kanzenze, even when there was incoherence in timelines.

Uwinkindi, who sat quiet for almost 99% of the examination of his files suddenly stood up and asked the court judge for time to comment.
“I would like to inform the judge that I submitted an appeal to have my case revisited. That should be considered and put to the court clerk as something crucial,” Uwinkindi said.

After listening to Uwinkindi for a minute, the court said that this will be considered immediately but upheld the earlier High Court decision on grounds that Uwinkindi’s appeal had no substance to have the court reverse the earlier decision.

Technically, Uwinkindi can now pursue his next step of appeal to a higher court- that is the Supreme Court.