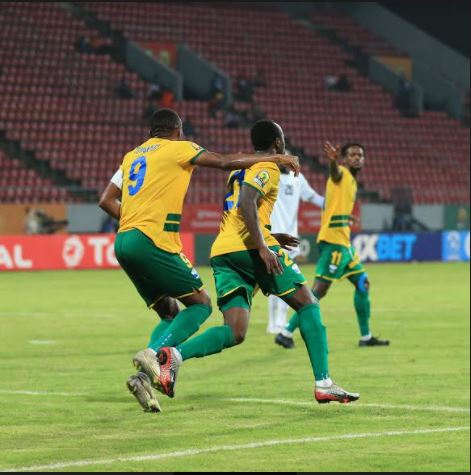 Rwanda made it through to the quarter-finals of the African Nations Championships (CHAN) after an impressive victory over Togo at Stade Omnisport de Limbe on Tuesday night.

After two consecutive goalless draws against Uganda and Morocco, Amavubi picked themselves up in Group C final game to beat Togo’s Sparrohawks 3-2.

Ernest Sugira scored a winner moment after coming on a substitute as Amavubi fought back from 2-1 down to beat Togo and progress to the quarterfinals of CHAN for the second time in the history if the competition.

Togo took the lead through Richard Yendoutie Nane’s goal in the 38th minute when Emery Bayisenge failed to intercept the final pass inside the box.

Togo’s goal rattled Amavubi who looked set for an early exit from the tournament before Olivier Niyonzima equalized with a headed effort just before halftime.

Rwanda were once again trailing early in the second half when Balali Akoro doubled the lead for Togo in the 58th minute.

But Vincent Mashami’s boys quickly responded when Man of the Match Jacques Tuyisenge put his side level after just one minute, heading from Ombolenga’s cross in the 60th minute to give his side renewed hope while substitute Ernest Sugira decided the game with a deflected effort in the 66th minute.

Togo continued to dominate the possession and almost found an equalizer but goalkeeper Olivier Kwizera made a brilliant save to keep his side in the game.

After the final whistle, there were scenes of jubilations on the pitch and back home as Rwanda qualified for the quarterfinals of the tournament for the second time after reaching the same stage on home soil in 2016.

In Group C’s other fixture, defending champions Morocco trashed Uganda 5-2 to finish top of the group.

Sunday’s quarter-final will see Rwanda play the winner of Group D, who play their final round of group games tomorrow.