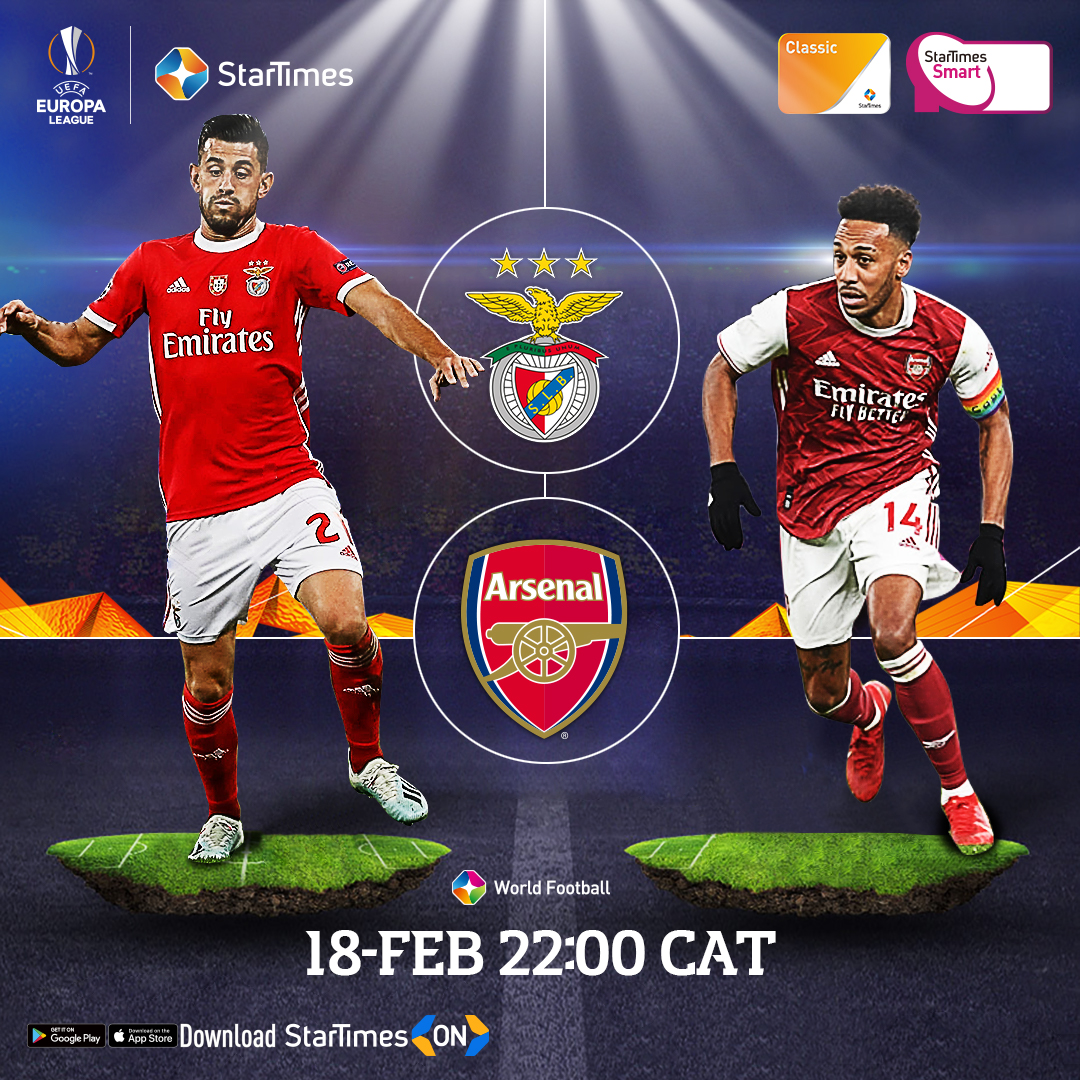 When it comes to footballing pedigree and tradition, Benfica and Arsenal are right up there with the best, and on Thursday they face each other in the first round of the last 32 in the Europa League.

Both clubs have tasted success in European competition already, with Arsenal winning the old Fairs Cup (the predecessor to the Europa League), as well as the Cup Winners’ Cup in 1994.

They have also lost an astonishing six European cup finals, the last being the Europa League final in 2019, when Premier League rivals Chelsea beat them 4-1 in a one-sided final in the Azerbaijan capital Baku.

Arsenal’s six final defeats are even two less than Benfica, who won the 1961 and 1962 European Cup competition – which has since been renamed as the Champions League.

In 1963, they began a run of final defeats, that currently stands at: played eight, lost eight, including two defeats in the Europa League (2013 and 2014).

Their fans swear that the defeats are due to the Béla Guttmann curse, which the former coach is said to have placed on the club after officials, despite him winning the two European Cup trophies with the club, turned down his request for a modest pay raise.

He is said to have placed a curse on the club by saying that “Not in a hundred years from now will Benfica ever be European champion again.”

Disappointingly for their fans, Benfica’s home match on Thursday will be played in the Stadio Olimpico in Rome, while the return leg a week later will be played in Greece. Both matches, as well as several others, have had to be moved due to the Coronavirus pandemic.

The Gunners secured a 4-2 league victory against Leeds United on Sunday, with Pierre Emerick Aubameyang bagging three of the goals. The Gabonese striker has not featured much in the competition, but seems likely to feature in Mikel Arteta’s plans against Benfica.

Unlike Arsenal, Manchester United go into their first round match in Turin against Spanish club Real Sociedad on the back of a disappointing 1-1 draw at Premier League strugglers West Bromwich Albion on Sunday.

United coach Ole Gunnar Solskjær dismissed speculation that the Reds would concentrate on the Premier League at the expense of European competition.

“It doesn’t work that way. You can’t just prioritise some games. Of course, there will be rotation and the team will change. You have to freshen things up when you play Thursday and then Sunday and it’s impossible in today’s circumstances to play the same 11 every game.

“You could only do that if you were playing once a week. We will make decisions but there will be chances in Europe for other players and if it takes us the whole way, brilliant. If not, then let’s look at it then because we have two legs, two bites at the cherry.” 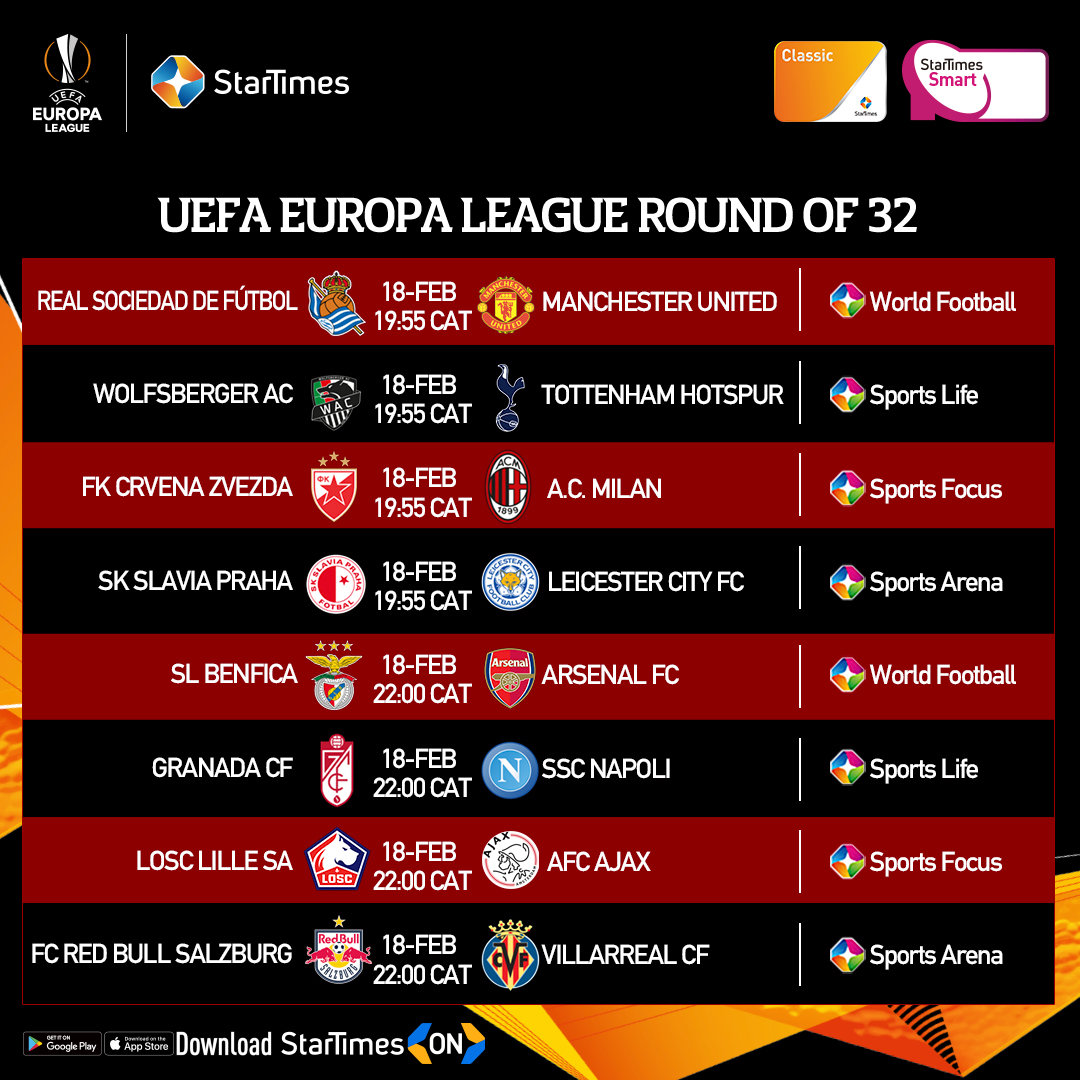 The Norwegian coach admitted that his side were at an advantage as they could play their return leg in Manchester.

“Of course, home and away if we keep that going we do have a little advantage and it’s a disadvantage for Sociedad, of course, to have their home game in Turin,” he said.

England’s two other clubs still involved in the competition, are also away in their first round matches. Tottenham Hotspur face Austrian club Wolfsburger AC in Budapest, while Leicester City travel to Prague for their game against Slavia Prague.

Football fans throughout Africa will not miss any of the most exciting Europa League action as the best games will be shown live and exclusively on the StarTimes channels.