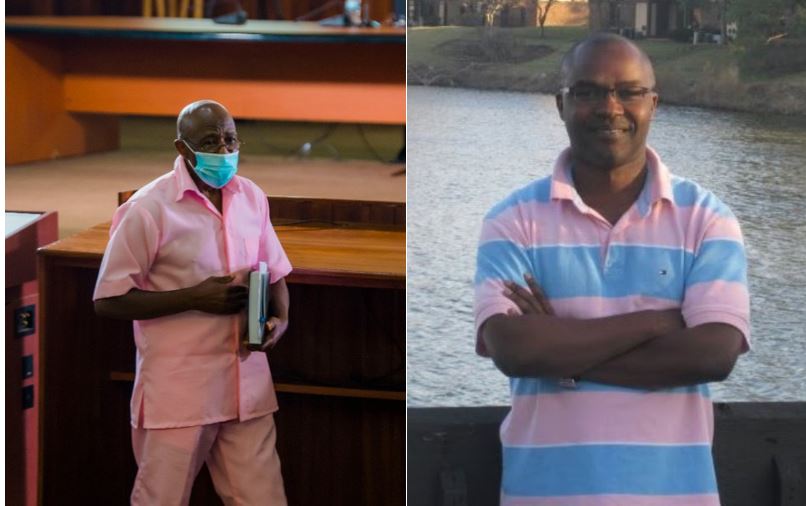 A United States academic has shared a testimony detailing how Hotel Rwanda “hero” Paul Rusesabagina and his allies planned to overthrow the Rwanda government.

The witness, Prof. Michelle Martin, affiliated to California State University, Fullerton, who was a volunteer with Paul Rusesabagina’s Hotel Rwanda Rusesabagina Foundation (HRRF) gave details of how Rusesabagina used his ‘humanitarian’ connections to obtain funds from unsuspecting donors and used the same funds to finance his political activities.

She shared the testimony after taking oath to volunteer court with information regarding Paul Rusesabagina in the Special Chamber of High Court for International and Trans-border crimes on Wednesday.

Rusesabagina and 20 co-accused are part of this trial, but the latter decided to withdraw from attending court sessions, but the court decided that the trial will proceed.

It’s a witness that was brought by the prosecution which accused Paul Rusesabagina of 9 crimes which are related to creating a terrorist group, conspiracy to commit murder, and other suspected crimes committed on Rwandan soil especially between 2018 and 2019, when he was the leader of the MRCD/FLN coalition.

“I’d like to share why I’m here today. I had information that I learned over 10-yrs ago that relates to this case and I agreed to share with the court. The information relates to my personal knowledge of the activities of Paul Rusesabagina and his associates,” Dr. Martin told the court.

The information she has just shared relates to Rusesabagina’s then political outfit, PDR-Ihumure and its allies. She said she learned some of this information from his professional association with an individual named Providence Rubingisa, a friend and colleague.

She has also shared her direct experiences with Paul Rusesabagina and his organization HRRF in the general time frame of the fall of 2009 up to September, 2012.

“I want to mention that I did write out my testimony because it is very complicated,” she said.

“The information that I have came from numerous sources and there’s a lot of documentation and I want to be very clear and precise. I also want to mention a lot of the information I uncovered relates very much to the person that I am,” Dr. Michelle Martine said.

“As an academic and as a researcher, I have a natural curiosity and if something catches my attention, I will stick with it until I figure it out, but I am not here in any sort of professional capacity, ” Dr Michelle Martin told court before beginning her testimony.

“Nothing that I did related to uncovering this information was related to my professional career. I also wanted to mention how I preserved information,” she said adding that her tech-savviness allows her to keep records of exchanges and evidence. 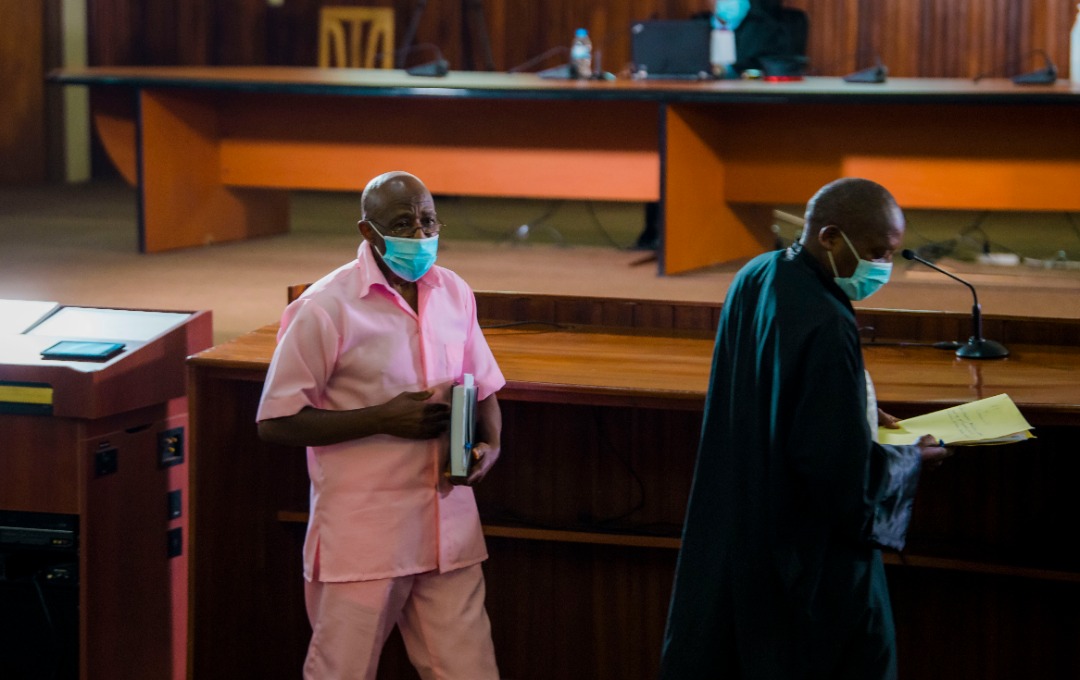 Dr. Martin said she normally takes screenshots of conversations she is curious about and sends emails to herself as a way of preserving records.

“I like screenshots because they create a timestamp,” she said before delving deep into her relationship with Rusesabagina.

She said she met Rubingisa through a friend and colleague who worked with a refugee resettlement program, who introduced Rubingisa as a genocide survivor but she would later be shocked by the narrative of the genocide he peddled, which was different from the official narrative.

Impressed by Rubingisa’s story and charity activities, they started working together, exchanging correspondences via text messages and emails which she still has copies of. Initially, she was given access to his email account to respond to specific emails, thereby having unlimited access.

“The nature of his charity as he explained during the conference involved local churches and schools donating used shoes which he claimed were shipped to Rwanda to genocide orphans,” Dr. Martin said, adding that he requested her to respond to his emails.

She later got accustomed to phone calls and Skype calls on which he discussed political issues. The calls lasted for hours. She was upset when she figured out what was going on. When she inquired about the calls, Rubingisa told her that he was part of a Rwandan political opposition group called PDR-Ihumure.

Rubingisa informed her that ‘the famous Paul Rusesabagina of Hotel Rwanda was the president of the so-called political party. He also mentioned that they supported the creation of another party in Rwanda, PS-Imberakuri, led by Bernard Ntaganda, who would contest in 2020 polls. 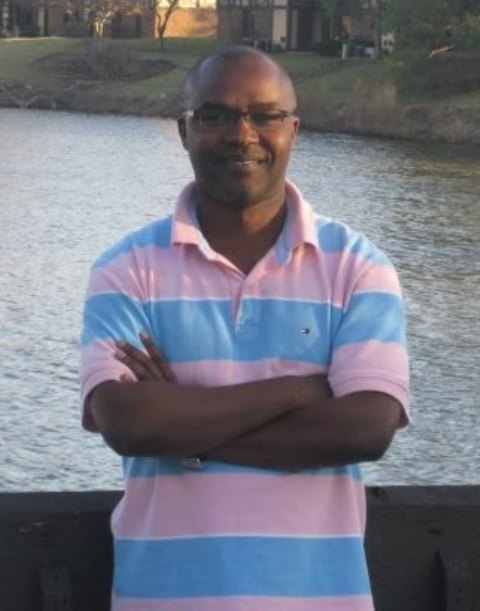 He mentioned to her that once Ntaganda was elected President, Rusesabagina would return to Rwanda and assume the role of President, under this arrangement.

Rubingisa claimed the plan had already been hatched to oust President Paul Kagame and his ‘Tutsi’ government.

Following lengthy calls and exchanges, Rubingisa confided in her and expressed frustration with Rusesabagina because he did not believe that he was providing sufficient financial support to Ntaganda’s PS Imberakuri and that he was not opening up about his political ambitions.

“I also recall. Mr. Rubingisa telling me that no one could know about Paul Rusesabagina’s political ambitions because he was supposed to be just a humanitarian and that was approximately January of 2010,” she said. It is Rubingisa that introduced Rusesabagina to Dr. Martin.

It is at this point that she got curious and started saving most of the conversations, sometimes extending months back. She got into the habit of scrolling down to the bottom of ‘Yahoogroups’ exchanges and she saved the messages, as long as they contained details of their activities.

Regardless of language challenges, she began to read the discussions because she had a growing suspicion. She also figured out that she could use Google Translate to translate messages in Swahili and French. Kinyarwanda was not included in Google translate yet.

“I was previously aware there’s some political opposition groups which were advocating for change in Rwanda and I supported this within the vein of an open and free democracy for this reason in the very beginning. I was not concerned about the content of the discussions,” she said.

Having figured out that Rubingisa and his group peddled a different narrative of the 1994 Genocide against the Tutsi, she increasingly got disturbed by the content she was seeing in their discussions and the ideology they harbored, which was becoming toxic by the day.

Dr. Martin revealed a lot of details about Rusesabagina’s subversive and terrorist activities in the region, aimed at destabilizing Rwanda. She possesses hundreds of detailed emails and text messages pinning him.

After she became suspicious, Prof. Martin started scrutinizing the conversations and noticed a common pattern of genocide denial and also commentaries and articles of FDLR. Having read extensively about the Genocide against the Tutsi, she understood that it was different from the true narrative.

She said she figured out that the group was consistently and overwhelmingly supportive of the FDLR and realized that they were hatching a plan to take their country back (to the genocide) by any means possible. Prof. Martin shared the exchanges of Rubingisa/Rusesabagina with court.

Martin said that following what she saw, she realized that Rubingisa and PDR Ihumure members were intentionally misleading the U.S public on the genocide, yet purporting to be genocide survivors, while at the same time duping Americans about charity activities they were doing in Rwanda.

She said that members of the said groups purposely misled westerners with false narratives while purporting to be genocide survivors yet in their groups they openly identified themselves as ‘Hutus’. They shared stories that duped people into thinking they survived the Genocide.

“But then the stories would take what seemed to me to be a false turn,” she said, adding that they would say how they escaped to Zaire (DRC) and lived in refugee camps along the border, all of which confused the American public with conflicting narratives of the Genocide.

Most of the members of the said groups were hideous. For example when they sent her friend requests on Facebook, she realised that they didn’t have photographs posted, no albums that included their identification cards as well as other information about their ‘old ethnicity’.

It all came to light when she offered to be a ghostwriter of Rubingisa’s autobiography. While in his interview he shared the traditional narrative of the genocide where Tutsis were killed, other stories he shared were not connecting well and contradicted that.

Throughout the process of discovering the true identity of Rubingisa and others affiliated to him, Dr. Martin said she remained stoic during the interviews and at no time did she reveal what she believed she was discovering but she continued to gather details of it all.

Through Rubingisa, Prof. Martin was also able to know how the HRRF came about in 2006 and how both Rusesabagina and Rubingisa used their charities to dupe unsuspecting Americans out of their money while peddling false narratives about the Genocide against the Tutsi. 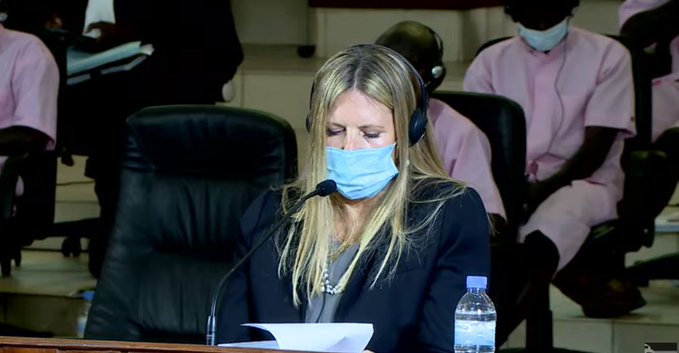 On volunteering with Rusesabagina’s foundation, Prof. Martin said that after she was introduced by Rubingisa to Rusesabagina in the fall of 2009, she was excited and based on the movie Hotel Rwanda, she thought Rusebagina was a true hero who saved people in Rwanda.

Prof. Martin met Rusesabagina for dinner in a restaurant in Chicago. “He discussed his role in the 1994 Genocide & his humanitarian organization HRRF, founded in Chicago, Illinois. He asked me if I’d be interested in working with the foundation as a policy advisor,” she said.

The engagement would be on a volunteer basis and she accepted. “I began working at the foundation shortly thereafter. I volunteered with the foundation for much of 2010  and my work was primarily on the policy team with another American academic,” Prof. Martin said.

On different occasions, Rusesabagina and his foundation worked to malign and blackmail the Government of Rwanda, particularly ahead of the 2010 Presidential polls, peddling different unfounded narratives that compared Rwanda to a Soviet satellite State during the Cold War.

Prof. Martin said that among other allegations they peddled in the document she saw was that the Rwandan military controls the perceptions of all visitors, there was widespread corruption in Rwanda & also claimed that the gov’t advanced a one-sided genocide narrative.

“It really struck me just how damaging this propaganda was to Rwanda as well as potential visitors from the U.S.” she said, adding that it is at this point she started to realize how Rusesabagina & co. were deeply engaged in genocide denial.