Rwanda: Regional Center Of Excellence For Vaccines Gets $ 17M Funding 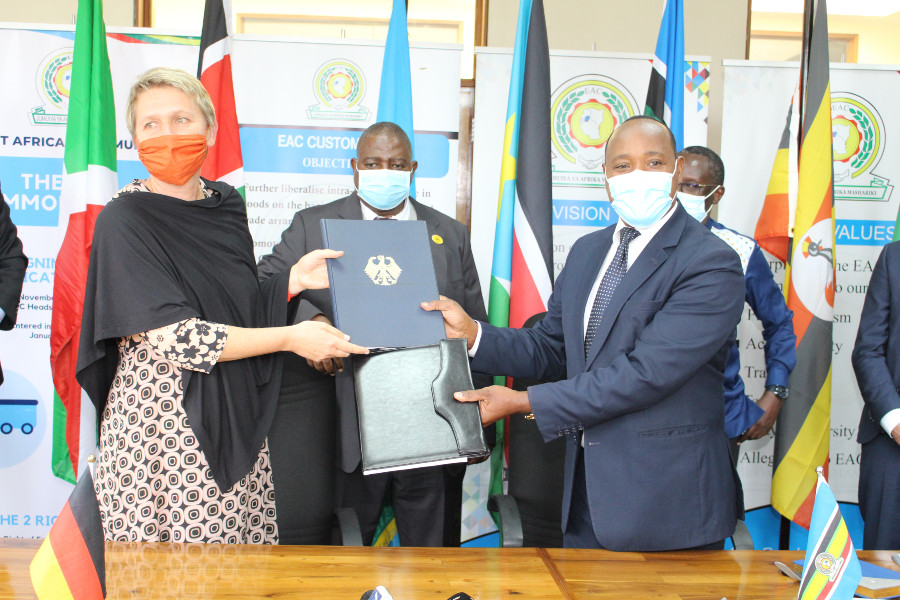 Exchanging agreements is Amb. Hess(Left) and Dr. Peter Mathuki(Right) May 17

The funding agreement was among others that were signed by East African Community (EAC) Secretary-General, Dr. Peter Mathuki and Regine Hess, Ambassador of Germany in Arusha- Tanzania, Monday 17.

Located in the Rwamagana district, Eastern province, the centre is expected to build the capacity and understanding of vaccines by students, vaccine storages, but also has long plans for vaccine manufacturing in the country.

It is among Infrastructure Development Projects (IDPs) that the new vice-chancellor, Prof Alexandre Lyambabaje targets to implement to improve the quality of education during his five-year tenure.

Regionally, other agreements signed in the health sector include an additional $30 Million for the EAC’s immunization program with Gavi, the Vaccine Alliance that will contribute to reducing child morbidity and mortality in the region.

The immunization funds($30mllion) will finance the procurement of at least four different types of vaccines (Pentavalent, Rotavirus, Pneumococcal, and Measles second dose), to be made available for routine immunization and immunization campaigns for children in all six Partner States of the East African Community.

“We can look back to over 20 years of successful cooperation with the EAC Secretariat. We are committed to continuing this cooperation in key areas such as health, trade, and economic infrastructure; and technical and vocational education and training under your new leadership of the EAC Secretariat, Secretary-General Mathuki,” Amb. Hess said during the event.

Amb. Hess said that the cooperation particularly supports the youth in the region, adding that the younger generation in East Africa would benefit from the program.

“The signing today of the two government agreements on development cooperation amounting to 65 million US Dollars (EUR 53.8 million) demonstrates the commitment of the Federal Republic of Germany to support the EAC Integration. I intend to continue strengthening this partnership,” Dr. Mathuki said.

“This funding comes at the end of the inaugural grant and it will thus sustain the RCE into the next decade. It will allow the RCEto build its own brand and capacity to generate its own revenue,” said Dr. Steven Karengera, Director of the Vaccine Institute.

The new funding is an addition of Eur 10 Million used for the construction of the institution, funded by KfW Bankengruppe, a German state-owned development bank, based in Frankfurt city, last year.

According to the EAC released document, Amb. Hess said that Germany will commit additional funds of up to $6.6 million for pandemic preparedness and response in 2021, to be implemented through the existing EAC-German program on pandemic preparedness, economic integration, and digital skills.

Give Me A Chance to Teach My Students, Raise My Children – Kidney Patient