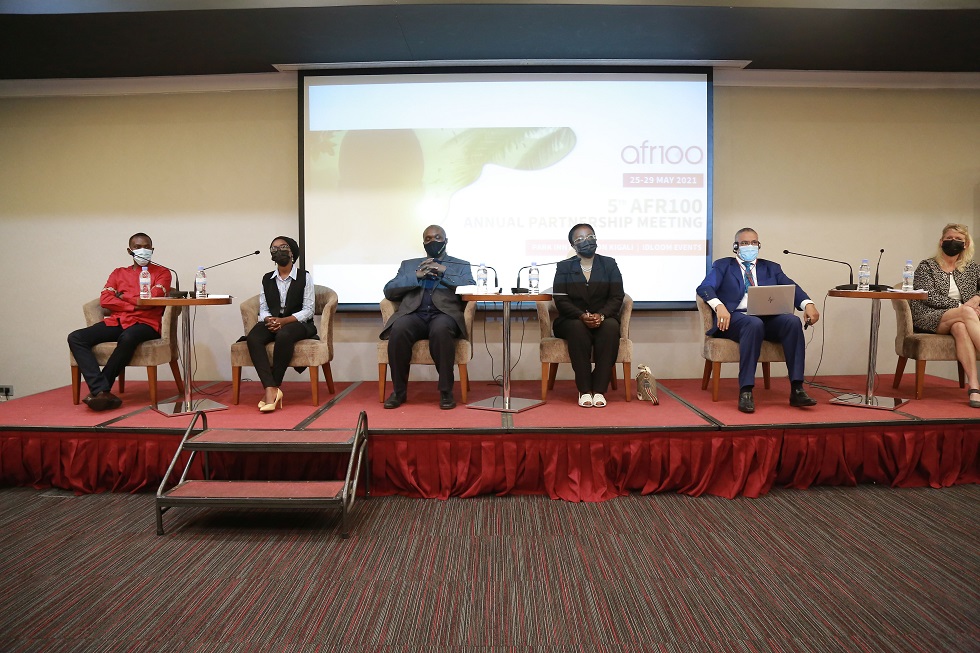 Officials at the AFR100 meeting happening in Kigali

Three years ago, cooperative Tubungabunge Amashamba-“Cootab” in Bwishyura sector in Rwamagana district asked local leaders to find a solution for their scattered unproductive land which is visibly covered by rock stone over the hills above Lake Muhazi.

“We didn’t know what to do with the land which was barren, but we were advised to consolidate the land and plant trees as a source of income,” says Augustine Bizimana one of the 78 tree farmers.

Selling the idea to the landowners was a challenge, and Bizimana says that many agreed to pursue the idea but some refused for fear of land grabbing.

To convince the land owner, Bizimana says they had to involve local leaders to sign a land use agreement in which the consolidated land remains in the hands of the people.

This agreement helped the land owners to buy into the idea in which 28 hectares of infertile land was consolidated and 20,000 eucalyptus trees planted.

In two years, the cooperative members will be harvesting and the least of profits will be Rwf5million for a member who has lesser tree cover according to Bizimana, who is also the cooperative’s chairperson.

“To opt for tree planting was a measured move for the cooperative members, not money but to restore soil eroded hills on Lake Muhazi, and recover lost rain amounts,” Bizimana says.

Charles Mangwero of Mozambique said he was very impressed to see how the people in Rwanda are seriously making tree growing an individual and community passion towards conservation.

“In my community when we see trees to be, it is forcibly to be destroyed for timber, wood, medicine and no replenishment, but here in Rwanda I’m seeing a different story whereby the communities are seeing the forests as their future, as their everyday life,” Mangwero said.

The “Cootab” experience is among many other restoration initiatives in Rwanda with different partners including International Union for Conservation of Nature (IUCN) which has started implementing a large scale forest and landscape restoration project in Nyagatare and Kirehe Districts in the Eastern Province.

The project aims to restore more than 25,000 hectares of degraded farmland in the above two districts and catalyze restoration efforts across the country by scaling up best practices and lessons learnt.

This is expected to further push Rwanda’s ambition to meet the Bonn Challenge to restore forest cover through tree planting activities especially planting indigenous trees that can, besides conservation, also be used for medicine.

Rwanda had set an ambitious target to achieve 30% forest coverage by 2020, but this was surpassed by achieving 30.4% by 2019 as a result of policy and strong partnerships between the Government of Rwanda, private sector, development partners and citizens.

During the opening of the AFR meeting 31 countries like Rwanda gave updates on progress and challenges in attaining the AFR100 million hectares of tree cover in Africa by 2030.

“Since 2011, Rwanda has so far worked on 900,000ha which is 45% of the total land to be restored by 2030. This means the remaining target will be met,” said Mugabo Jean Pierre, Director General Rwanda Forestry Authority (RFA).

To further increase citizen participation through private forest management,  Mugabo said that so far 60% government  forests have been privatized of the 80% target by 2024.

Mamadou Diakhite, the Head the Environmental Sustainability Division at the African Union Development Agency (AUDA-NEPAD) lauded Rwanda for community led initiatives and said the meeting provides an opportunity for others to learn from Rwanda.