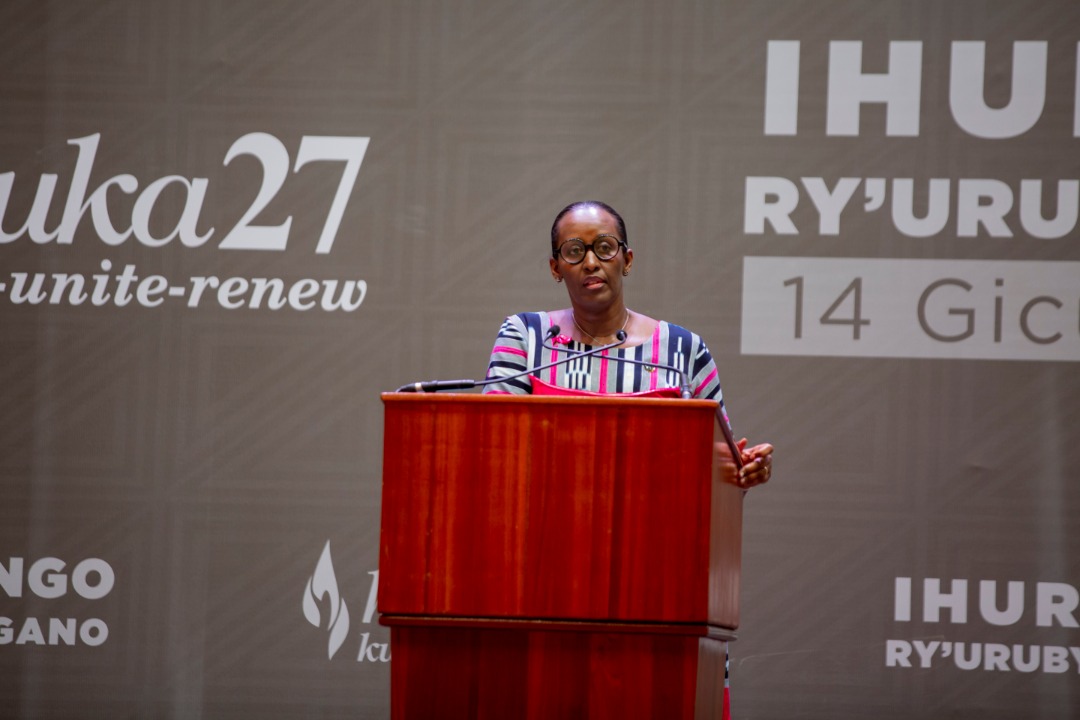 The First Lady Jeannette Kagame has told the youth that each and everyone’s effort in the fight against Genocide ideology is important and the way to go is promoting Ndi Umunyarwanda program which aims to build a national identity.

The First Lady was today attending the ‘Promise of the Generation Youth Conversation’ that convened 300 youth at the Intare Conference Aren in Kigali city on Friday 14.

Mrs. Kagame said that Ndumunyarwanda program has greatly contributed to the fight against Genocide denial and ideology, but the Ministry of Health has revealed that trauma continues to increase among genocide survivors.

“The Ndi Umunyarwanda program has helped us, but we still have challenges. As a youth, you should find solutions and work with National Commission for the Fight against Genocide (CNLG) to fight the Genocide ideology that is increasing among the youth,” Mrs. Kagame said.

The Ndi Umunyarwanda program also aims to strengthen unity and reconciliation among Rwandans by providing a forum for people to talk about the causes and consequences of the Genocide as well as what it means to be Rwandan.

Mrs. Kagame used the story of Colibri bird in the huge woodlands that were suddenly engulfed by a raging wildfire that frightened, all the animals fled their homes and ran out of the forest, but the Colibri swooped into the stream and picked up a few drops of water to put off the fire.

“One day a terrible fire broke out in a forest, and a huge woodland was suddenly engulfed by a raging wildfire. Frightened, all the animals fled their homes. As they came to the edge of a stream, they stopped to watch the fire, feeling very discouraged and powerless, and grieving the destruction of their homes. Everyone thought there was nothing they could do about the fire – except for Colibri,” Mrs. Kagame said.

“This particular Colibri swooped into the stream and picked up a few drops of water, then flew into the forest and put them on the fire. Then it went back to the stream and did it again, and it kept going back, again and again, and again. All the other animals watched in disbelief; some tried to discourage the Colibri bird,” Mrs. Kagame said.

As the Colibri bird started picking drops of water to put off the fire, some birds discouraged it saying “Don’t bother.” “It’s too much.” “You’re too little.” “Your wings will burn.” “Your beak is too tiny.” “It’s only a drop.” “You can’t put out this fire.

As the animals stood around disparaging the little bird’s efforts, the bird noticed how hopeless and forlorn they looked, then one of the animals shouted out and challenged the Colibri bird, asking in a mocking voice, “what do you think you are doing?” And the Colibri bird, without wasting time or losing a beat, looked back and said, “I am doing what I can.”

In the same scenario as Colibri bird, Mrs. Kagame said that fighting against the Genocide denial and defending unity is everyone’s duty and responsibility.

“Every effort in fighting Genocide ideology is very important. I want to share with you this message of the courageous Colibri bird and work individually and as Rwandans to defend unity, every added effort is crucial,” Mrs. Kagame said.

Mrs. Kagame said that youth should be brave to defend the country against people who need to destroy it.

To Empower and Mentor youth in fighting the Genocide ideologies, the event(Generation youth conversation) is organized by Imbuto Foundation and  National Commission for the Fight against Genocide (CNLG)and other partners, in line with the Commemoration of the 1994 Genocide against the Tutsi, every year.