When Paul Rusesabagina was arrested in August last year and arraigned in court in Rwanda on terror-related charges in September the same year, his political organisation quickly deleted the majority of the videos in which he declared war on the Rwandan Government.

From tweets to website articles and YouTube videos, the Rwanda Movement for Democratic Change (MRCD) worked around the clock to remove evidence of Rusesabagina talking about the activities of the armed wing of his political organisation, the National Liberation Front (FLN), and mobilizing support for it.

However, though MRCD successfully deleted most of the videos on their platforms and archived the official website to avoid implicating Rusesabagina further, a video of one of the last activities he engaged in before his arrest has re-emerged, showing him giving a background of how FLN was born.

Few weeks before his arrest, Rusesabagina held a virtual press conference on July 16, during which he gave a brief background of how MRCD came about as well as the armed wing, FLN, and what they set out to achieve.

“We formed MRCD in November 2016.  It was a coalition of two parties -CNRD-Ubwiyunge, led by Wilson Irategeka and PDR-lhumure which I led. After lengthy discussions, we set five pillars under one platform,” Rusesabagina says.

“The first pillar was the mandate of the ‘farmers’ (soldiers) who are on the field, the second pillar was diplomacy, the third mobilization, the fourth pillar was communication and the fifth was finance,” he adds.

As evidence previously indicated during the trial, Rusesabagina and his group used to refer to FLN fighters as ‘farmers’ while ‘cultivating’ was used in reference to armed activities of the group. 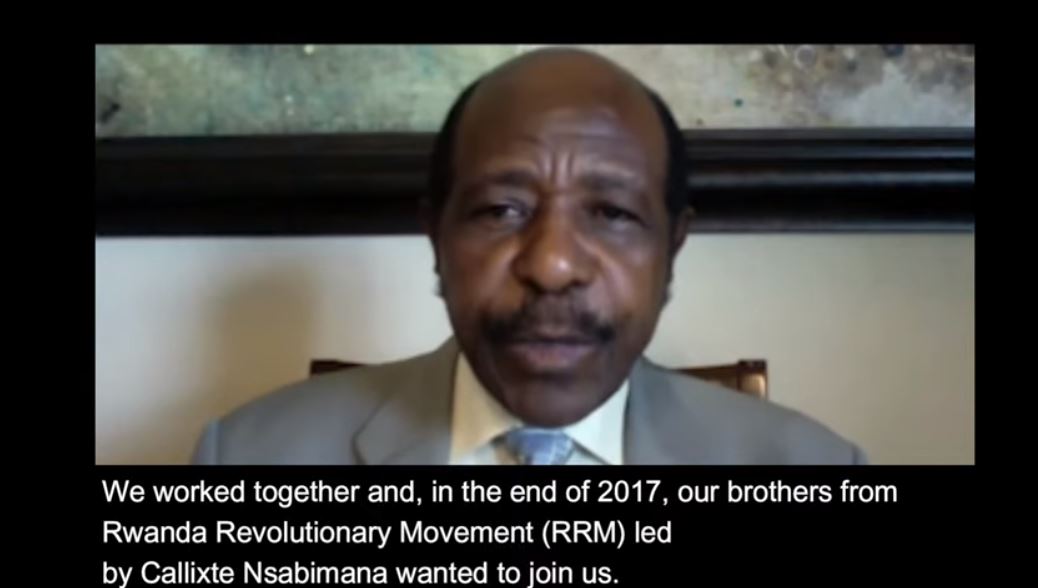 The National Council for Renewal and Democracy- Ubwiyunge, known by its French acronym CNRD, was formed by Gen. Irategeka after the split of another terror group, the Democratic Forces for the Liberation of Rwanda (FDLR).

In the video, which has been reposted by a YouTube channel, Rwanda Archives, Rusesabagina revealed that at the end of 2017, another group, Rwanda Revolutionary Movement (RRM), led by one Callixte Nsabimana, requested to join the MRCD coalition.

“After lengthy discussions, RRM was admitted into the coalition in March 2018. As soon as we became three organisations, we now asked ourselves, what name are we going to give our ‘boys’?”

“A meeting of three, as I mentioned earlier, PDR Ihumure, CNRD-Ubwiyunge and RRM, agreed to call them FLN. From May 2018, the acronym FLN was born. The boys were going to be known as FLN. The reason we came up with this name is because RRM was going to come with their own soldiers, so we needed an inclusive name, covering all parties,” Rusesabagina explains.

In the video, Rusesabagina revealed that RRM brought its fighters on board, which is why they considered FLN as an armed group that did not just represent the interests of three political organisations but rather everyone else who wanted to join the cause.

Rusesabagina further said that on June 18, 2019, they welcomed to the coalition another organisation, RDI-Rwanda Nziza, led by former Prime Minister, Faustin Twagiramungu, who wished to join the group.

Incidentally, it is Twagiramungu who asked Rusesabagina during the press conference, to give a brief background of how MRCD/FLN came about.

The video was originally posted on the YouTube channel of Espérance Mukashema, the MRCD/FLN communication strategist and Rusesabagina’s advisor on media affairs, who hosted the press conference.

Mukashema, who passed away in July in the Netherlands, was the head of the propaganda online radio ‘Ubumwe’, financed by Rusesabagina. Her name was echoed many times during the FLN trial.

The press conference, whose video was immediately deleted after the arrest of Rusesabagina, was attended by senior MRCD members and bloggers.

Rusesabagina was sentenced to 25 years in prison on September 20, by the High Court Chamber for International and Cross-border crimes after he was found guilty on terror related charges while Nsabimana got 20 years.