The campus which hosts the College of Arts and Social Sciences(CASS), one of the six colleges of the university, is surrounded by a beautiful forest, the famous – Arboretum which, some may suggest, is a natural forest though it is not.

Going back to Ruhande for those scores of alumni and lecturers who earned a living for their families from here, would be a trip with mixed reactions.

This pictorial replaces a hundred thousand words though it may not tell a particular story of each and every student/teacher. In any case, they can appeal to many because the lens captured the corners that are common. 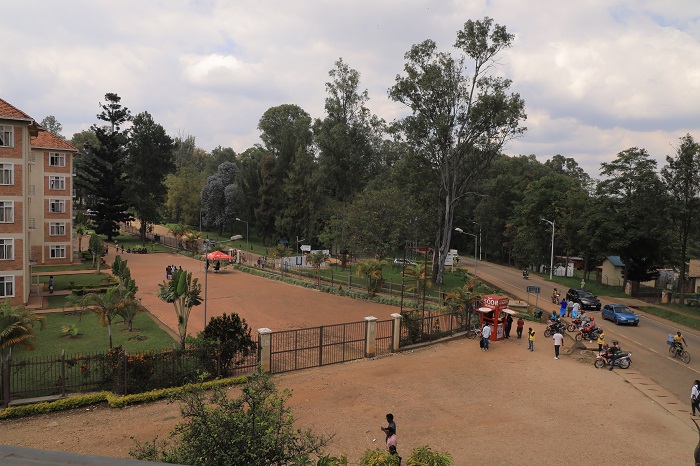 At the entrance, anyone who came after 2010 may not know the women’s hostels that were named after Bengazi, a major seaport and the second-most populous city of Libya. It should be reminded that at UR, every name of a facility is chosen in accordance with trending news. 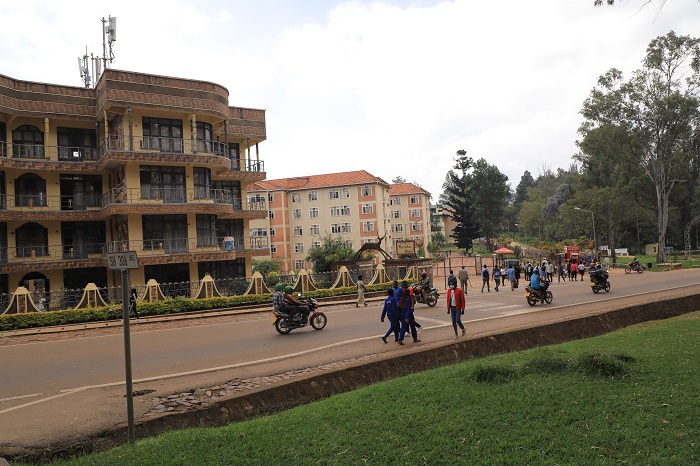 The three blocs’ Bengazi is adjacent to Sebukangaga’s Barthos Hotel. The intake of 2005 knows the expression “Guhangana na Sebukangaga mu matora” which meant to have no opponent in polls. 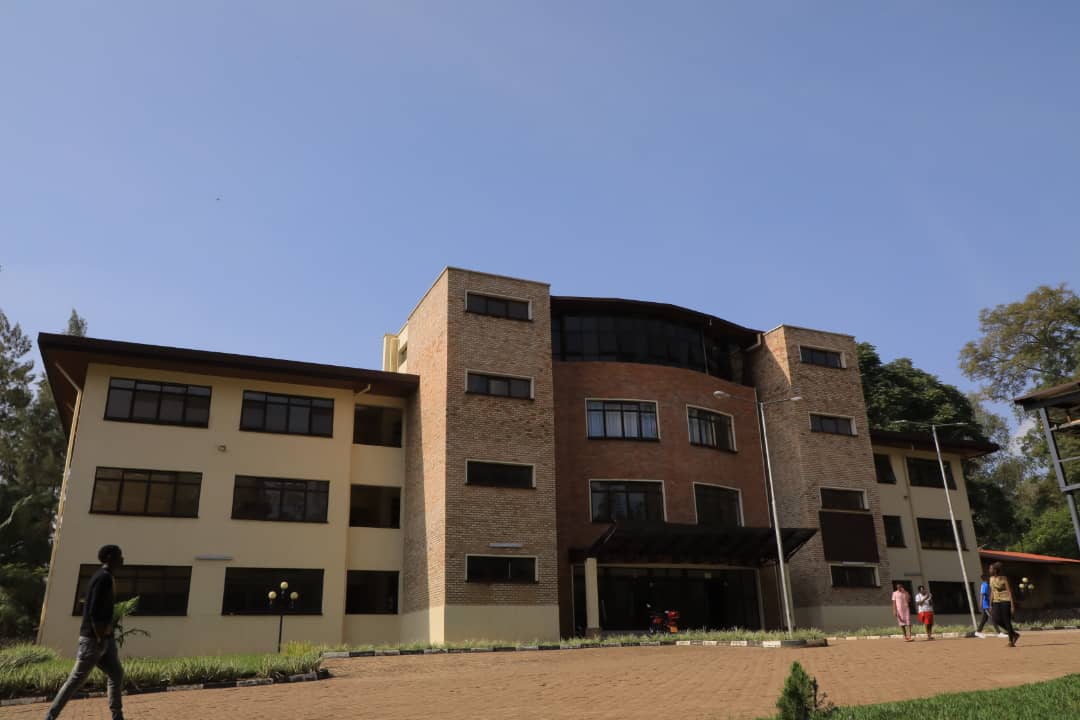 Towards UR’s Mini Imprimerie which offers printing services at giveaway price. Apparently, some students would prefer to go to Sebukangaga’s despite the price, for quick service delivery, especially when the deadline to submit “the book”(Kudepoza igitabo) was close.

UR’s Mini Impremerie is among the houses that offer printing solutions for students and lecturers. However, other private investors get space at the campus where the syllabus(Silabisi) is a household name.

Is there anyone who doesn’t know “Son Excellence”? that means they were at Ruhande before 21st century. The 50 seater bus was donated to the University by His Excellency the President of the Republic of Rwanda.

Students named the bus after the donor, and, one would feel unique comfort while aboard, probably due to the feeling that every “Son Excellence” mention is but executive.

Son Excellence joined an older bus, typically the Japanese brand like former ONATRACOM, also known to some as Rwanda or Ingonokera.

The two served the university for transport of students and their lecturers to field trips, entertainment/sport events among others.

News has it that the older bus, now parked near the football pitch was auctioned together with several other vehicles with public number plates.

Meanwhile, an almost common sense was that every student had to wrap up their undergraduate studies at Ruhande, with at least two achievements; having gotten a driving license and having a fiancee(Gufata or Gufatwa).

The idea to have a driving license generated a business, the “Campus Driving School”. No need to guess, the school was training interested students who wanted to sit driving tests including provisional and practice.

It worked for many students and those who completed with the driving license(even though buying a car would be a story on its own) would feel that they made a great achievement. 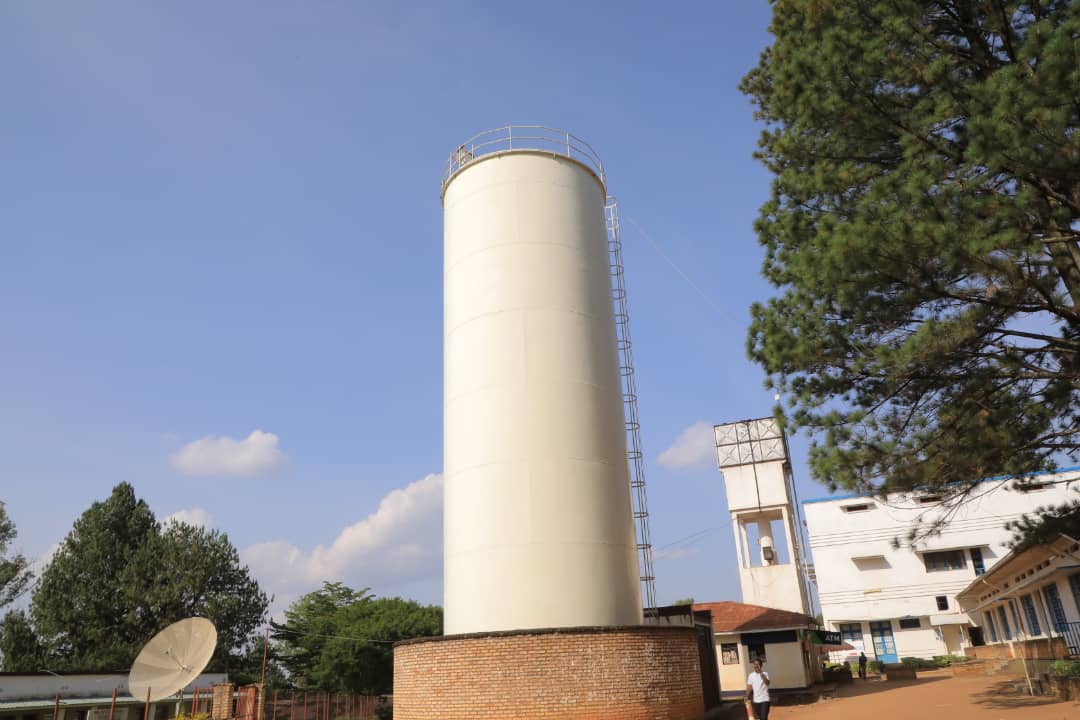 This huge tank adjacent to “Batiment Central” had got several funny stories around it, including a case which, according to some people, once upon time a man failed to convince a lady, and, when he was only left with “one bullet” to shoot, he thought of an extreme option.

He climbed the tank up to the top and addressed the lady downward :”Hey X! Say YES or I cast myself down and you watch the worst.”

For another story around the tank, if you know, you know. 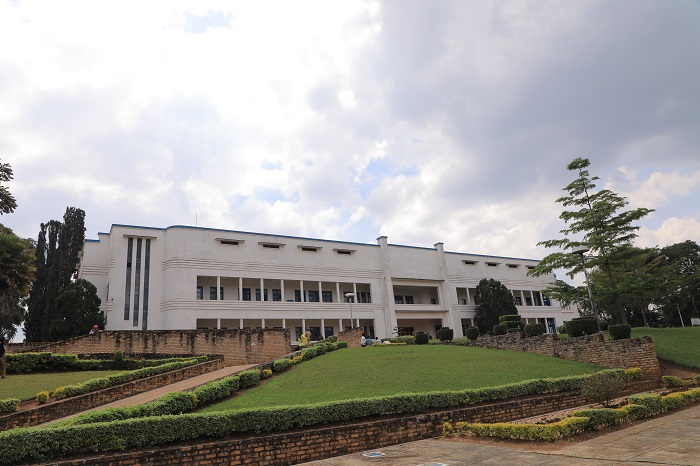 Next is the famous building which is allegedly the first facility that served the university since the beginning, Batiment Centrale, kuri Batima.

When I was at the campus by 2005, Batiment Centrale was essentially serving for classrooms, some libraries and an Auditorium-Audi Levesque which was named after the first Rector and founder, a Canadian Dominican priest Georges-Henri Lévesque.

From Batiment central, you head to “service aux etudiants”, and, if I recall well, this is the venue hostel rooms were offered.

At the opposite side of this building, multipurpose pitches welcome you and those who were at the campus in my time may no wonder remember at least two or three names, including Machine, Kinyabwenge (not Kigoryi please!) and Matungo.

In the far end, right adjacent to Arboretum, the majestic Gymnase completes the sport demand at the university, but it used to serve other purposes, including Christians who borrowed it for their prayer in evening, commonly known as Vingt-deux Heures.

And for those who are not familiar with this campus, this is not the cabinet like the one which writes some lucky people on the famous “Yellow Paper”, it is rather the University Students’ Union. My lecturers would understand what they do here if only I call this “AGEUNR”.

Every alumni would recall the popular AGEUNR president/commissioner of their time.

No wonder, URSU does business, case in point this cantine.

Before we continue with our trip, let’s first take a health break at the Campus restaurant if you don’t have time to go to Macrobiotique, the famous “On Devient Ce qu’on mange”(You become what you eat) restaurant near kwa Wariraye.

Now, grab your card(Igifu) and choose any bloc; this one? It is called Igikonari(Above and below).

Or if you take “ikiyanja cya ruguru”,(Below) know that your are choosing a canteen.

No wonder, tings will return to the way they were in 2009-2010 when this canteen(below) was still working.

The canteen is still under rehab, and for those who want to return to Huye, this will probably be a good hang out.

Do you also remember this corner of Science Students more or less in the middle of Arboretum? The campus removed asbestos on these classrooms which are now serving as laboratories for medical students,

Let’s now do a stopover at the UR hostels, to start with Vietnam, or Viet(i Viyeti), the women’s hostel below Batiment Central. At this place, there were regular visits from outside the campus, and of course, visitors from inside the campus. 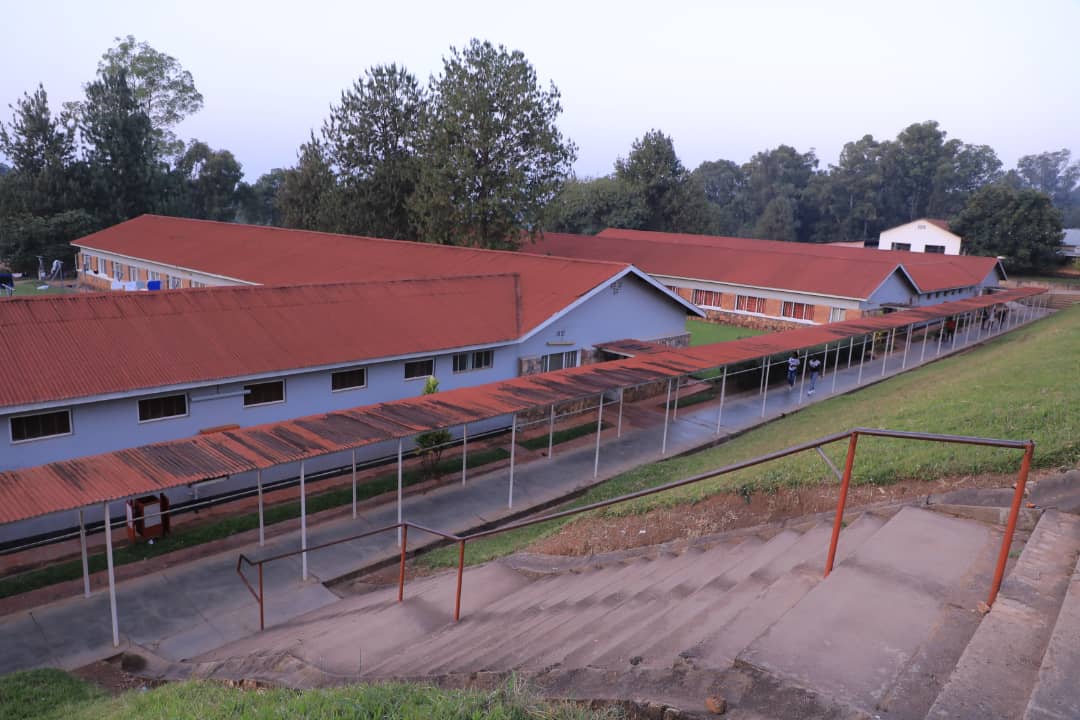 The small rooms meant to accomodate two students had to accept to take double this number due to the system of Kumakiza where the person entitled to a bedroom had to bring a younger friend to save them from spending a lot on accommodation outside the campus – Kwa Rusumbamiyenzi, Ku Mukoni, i Madina and others.

At UR Huye Campus, due to shortage, acomodation was only designated to finalists.

Others are Cambodge(Above and below) which was mixt and considered as the VIP hostel. News has it that the word “gusirikiza” was born here.

It meant to ask roommates to go around when one of them had a “distinguished” guest with whom they wanted to have light moments. 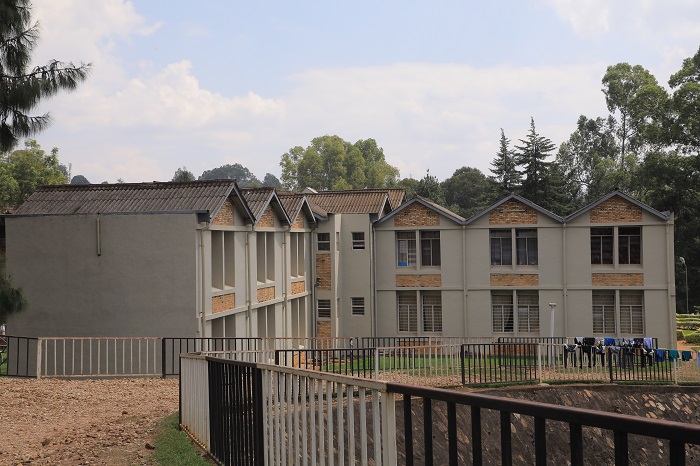 From Cambodge, you connect to Nyarutarama, a hostel for women towards Sebukangaga, but this is before the famous Titanic(Below) which includes rooms for ten and above. 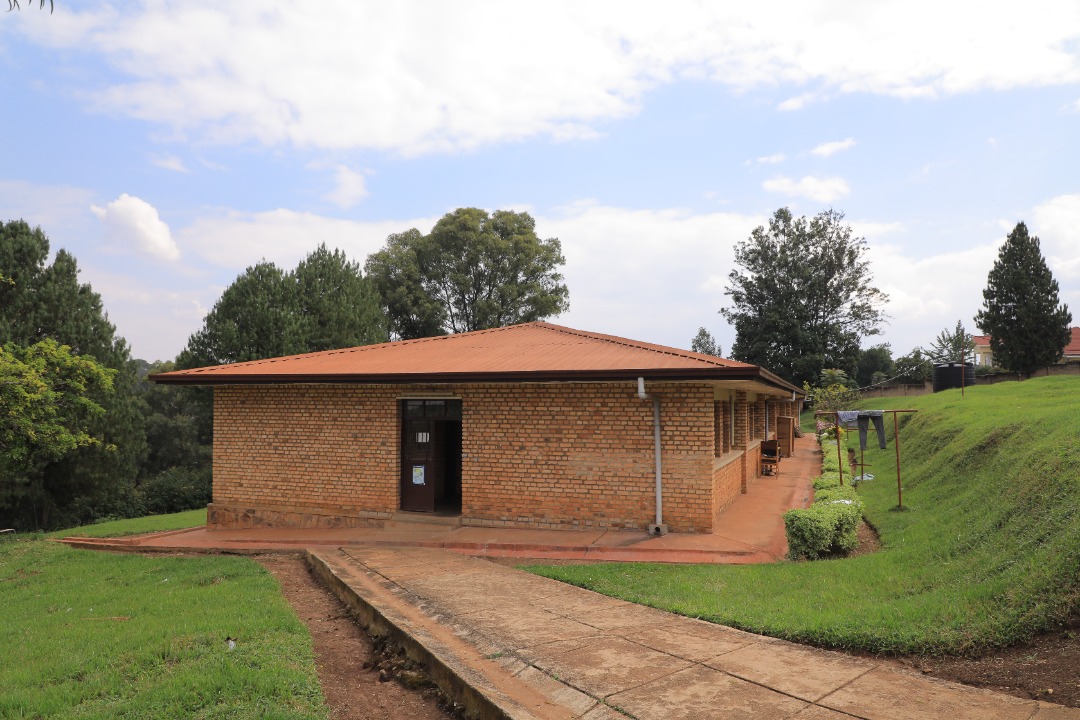 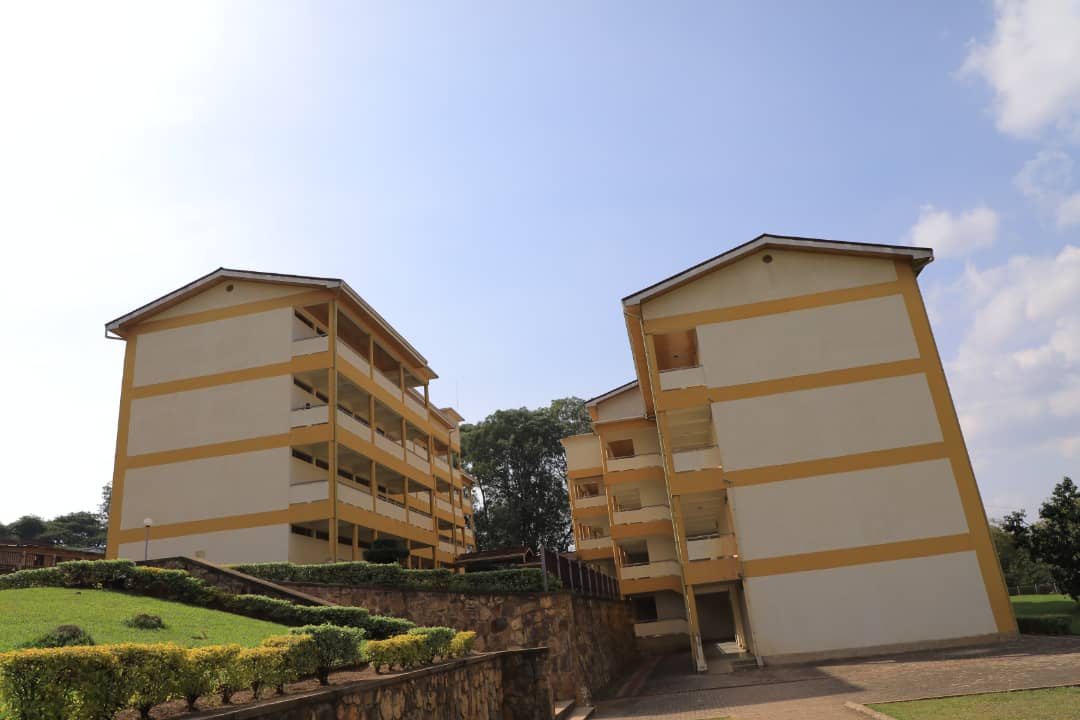 The adventists’ building near Kwa Sebukangaga