Kwita Izina: Pomp And Pageantry As 20 Baby Gorillas Are Named 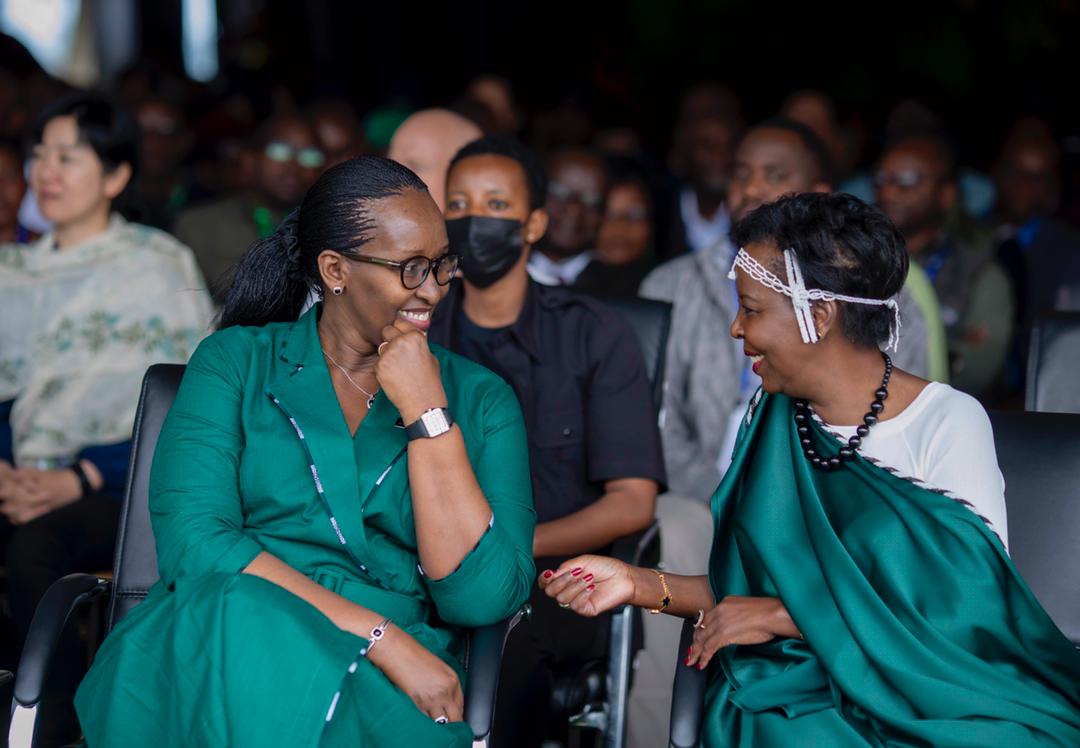 On a chilly afternoon at the foothills of the Volcanoes National Park, in Kinigi, Musanze district, global leaders, philanthropists, conservation champions and renowned sports, music and fashion stars took the stage to christen 20 baby mountain gorillas.

It was the return of the annual Kwita Izina, the gorilla naming ceremony, which last physically happened in 2019, before the Covid-19 outbreak. Over 20,000 residents of the Northern Province district of Musanze sang and danced, as a myriad of musicians took the stage, one by one.

The Prime Minister, Dr. Edouard Ngirente and the First Lady, Mrs. Jeannette Kagame were the guests of honour at the event, which has become the cornerstone of Rwanda’s conservation efforts. 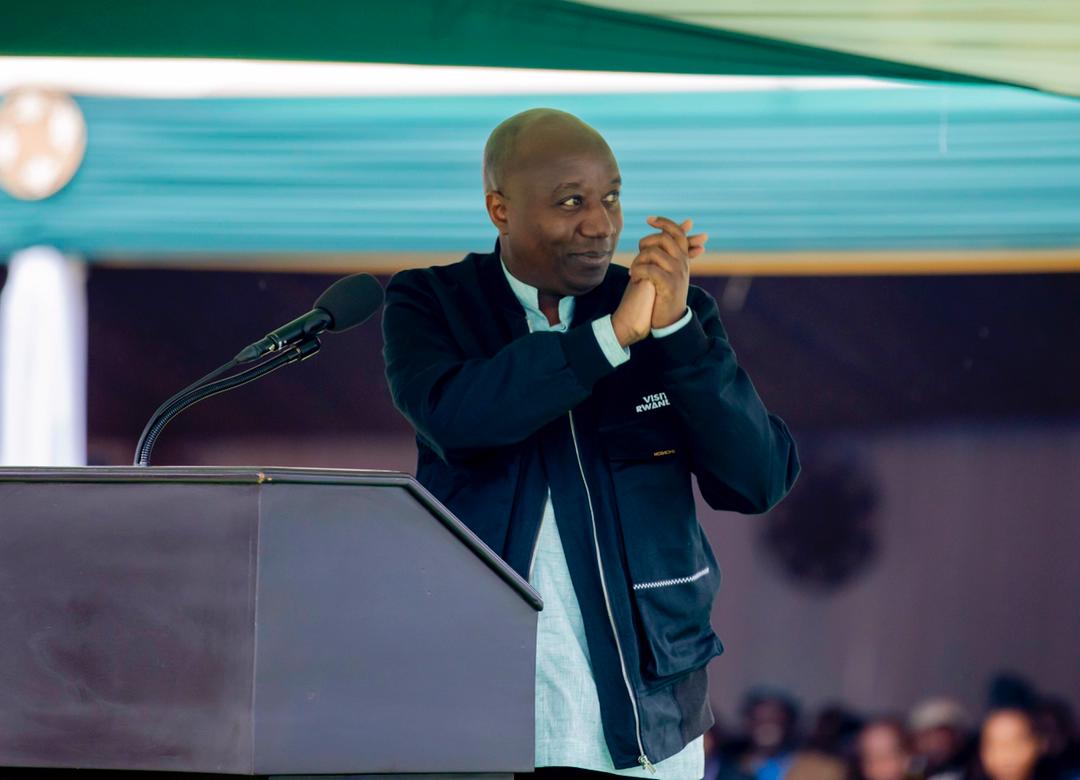 Yet again, the annual ceremony attracted a powerful line-up of global stars and leaders led by Prince Charles of Wales, who is renowned for his conservation work across the globe.

The British heir-to-the-throne named his baby gorilla “Ubwuzuzanye”, from the Muhoza family.

‘Ubwuzuzanye’, which means ‘Harmony’, is among the 20 babies, which were named by renowned conservationists and football legends including Didier Drogba, Gilberto Silva and Juan Pablo Sorin, among others. 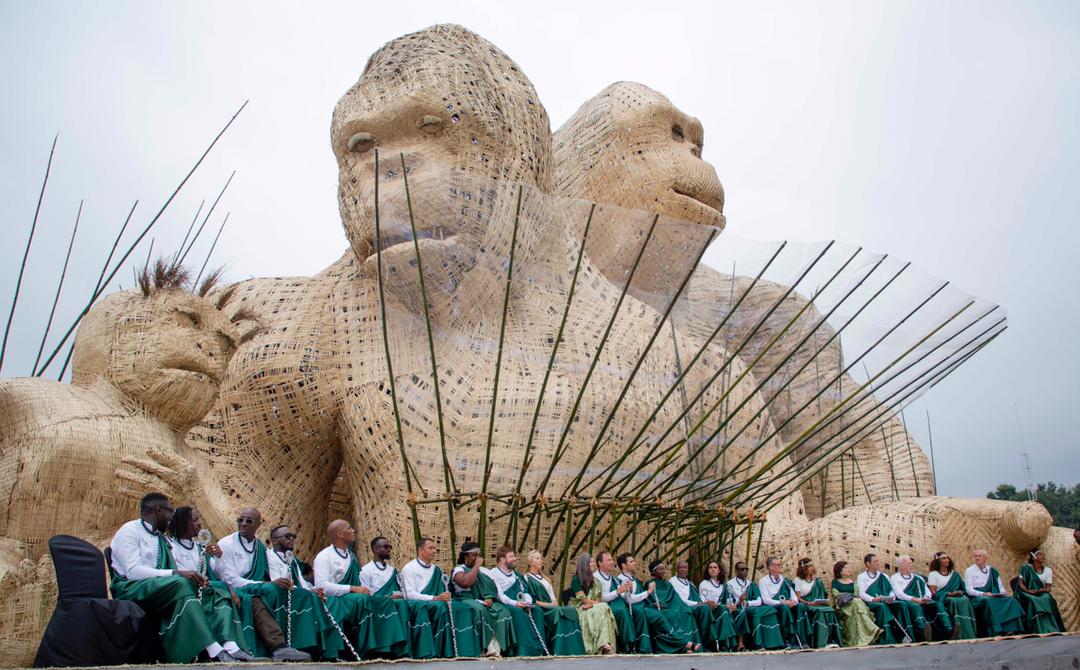 It was an affair of pomp and pageantry which cemented Rwanda’s mountain gorilla conservation efforts.

Speaking on behalf of President Paul Kagame, the Prime Minister, Dr. Edouard Ngirente reaffirmed Rwanda’s efforts to protect its natural heritage by investing in people, reiterating the importance of the tourism revenue-sharing scheme which he said is part of the country’s conservation strategy.

“By investing in the communities that surround our national parks, we are building a strong constituency for conservation that will span generations,”

“Given the threats we face from biodiversity loss, climate change and pollution, we are called on to expand our network of national parks and create new protected areas that restore our rural and urban wetlands,” Dr. Ngirente said. 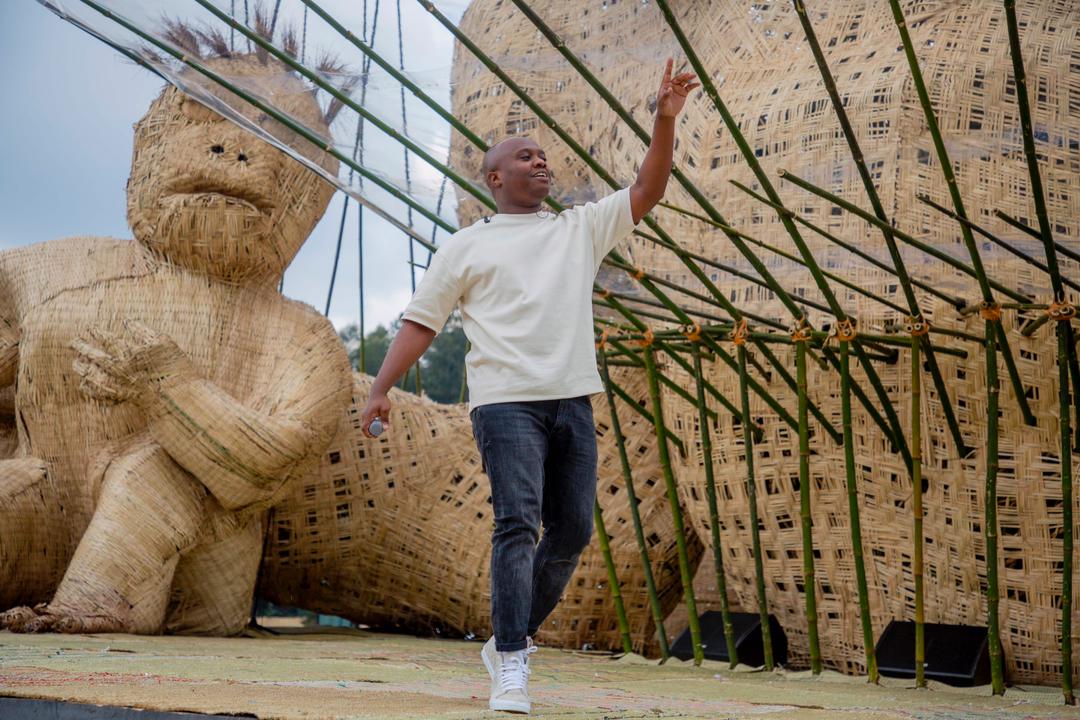 He pointed out that the Volcanoes National Park will be expanded to accommodate the growing number of gorillas, and improve their resilience to threats, including climate change.

The Premier said that the park’s expansion will also benefit communities through new economic opportunities, increased tourism and job creation.

“Tourism is a strategic priority in our country, and it is great to see the sector recovering following the impacts of the COVID-19 pandemic,”

“The Government’s rapid and successful response to the pandemic has succeeded in protecting the lives of our people and supporting the recovery of businesses severely affected by COVID-19 especially tourism,” he pointed out.

As a result, he said this enabled the tourism sector, among others, to quickly resume operations and safeguard jobs, adding that Rwanda is happy to welcome back tourists who are looking to enjoy what Rwanda has to offer.

In his televised remarks, Prince Charles said that he was impressed by Rwanda’s conservation work during his recent visit in June this year.

“I had the great pleasure of visiting Rwanda during the Commonwealth Heads of Government Meeting (CHOGM 2022) in June this year, where heard about the remarkable conservation work that Rwanda has carried out and continues to carry out to safeguard wildlife for generations to come,”

“Expansion of the Volcanoes National Park will ensure a bright future for the mountain gorillas that call it home,” he said, before naming his baby gorilla. 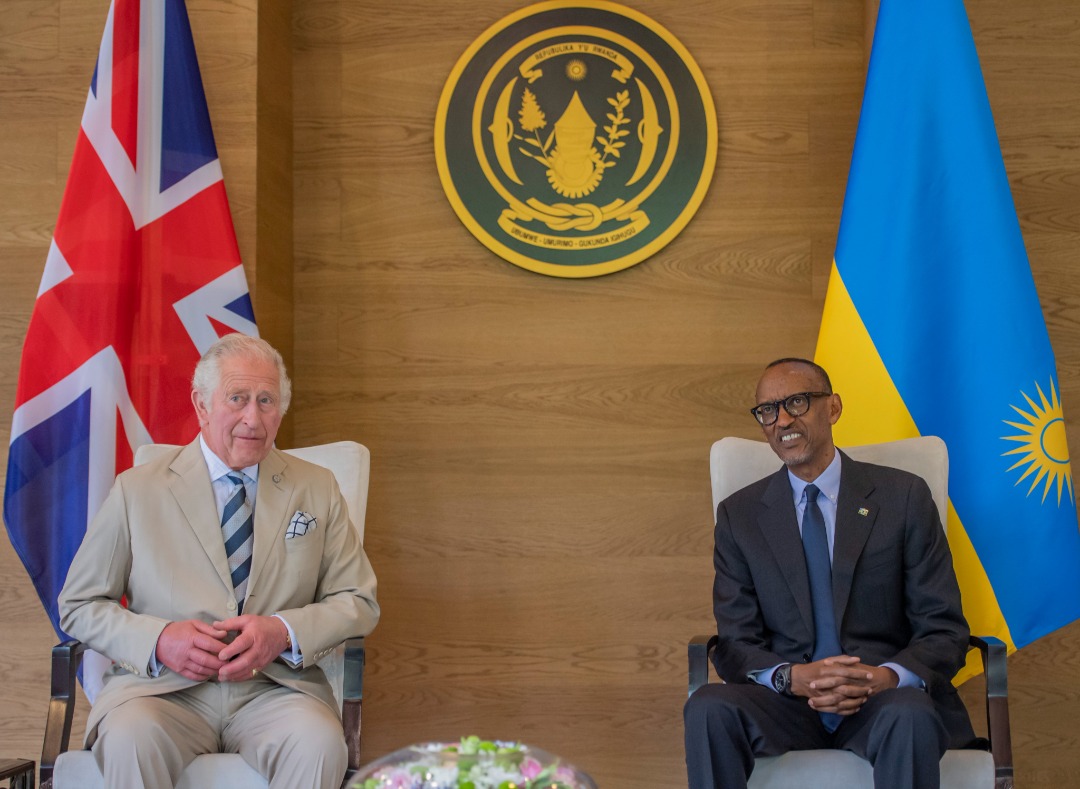 Prince Charles(L) in Kigali for CHOGM where he was received by President Paul Kagame, June 2022

He said he chose the name ‘Ubwuzuzanye’ to emphasize the nexus between nature, people and planet as the most critical aspects that can complement each other to tackle some of the extreme challenges that threaten the precious habitat of the Mountain Gorillas.

In her remarks, the Chief Executive Officer (CEO) of Rwanda Development Board (RDB), Clare Akamanzi, reiterated the importance of Kwita Izina, a symbolic act in the Rwandan tradition which carries a lot of meaning.

“One of the biggest moments in most people’s lives is when we understand the meaning of our names. It often feels like a huge revelation of who we are, and the standard and values which guide our lives. In a way, one’s name is their destiny,”

“In a name, many times, are also the aspirations and thoughts of communities we belong to – their best wishes for a bright future. In a name is a distinct identity that enables one to live a unique life,” Akamanzi said. 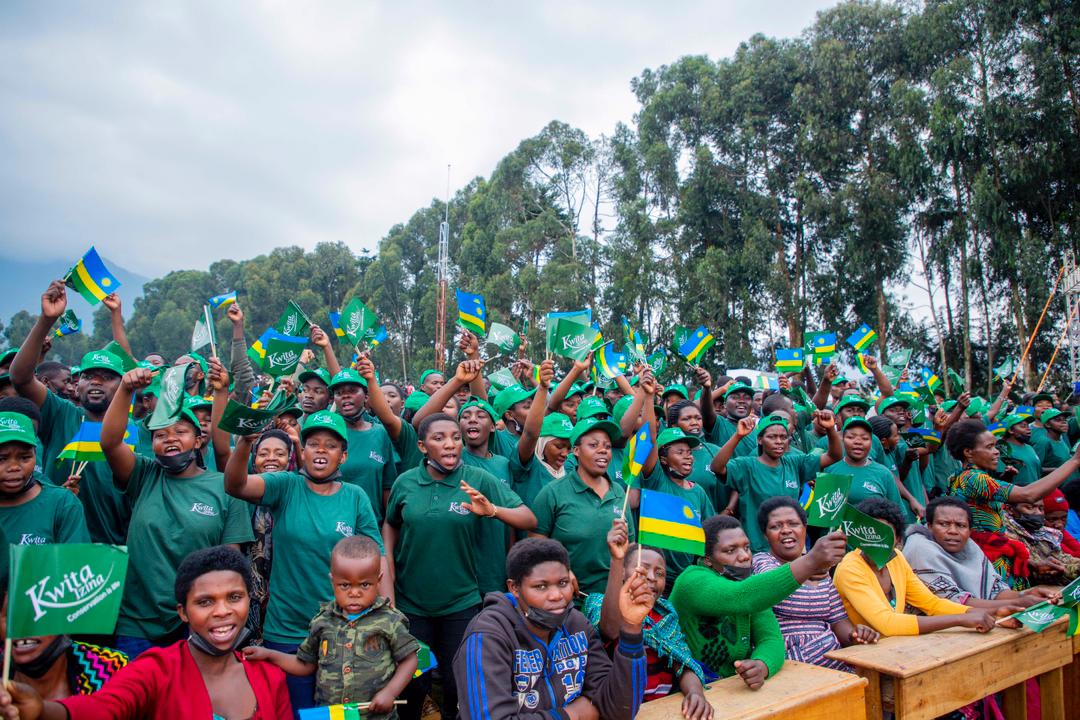 She pointed out that mountain gorillas are part of this unique heritage – found only in 3 countries in the world.

“Seeing them is a unique bucket list experience for many from all around the world. And yet unfortunately, in 1996, IUCN had classified these creatures as critically endangered facing a threat of extinction,”

“The good news, however, is that in 2018, mountain gorillas were reclassified from critically endangered to endangered, a recognition of their improved wellbeing, and owing to collective conservation efforts by all of you represented here today,” she added.

Akamanzi pointed out that giving names to baby gorillas is a significant contribution to their conservation because names make it possible to monitor their health and behaviour, while tracking their developmental milestones. 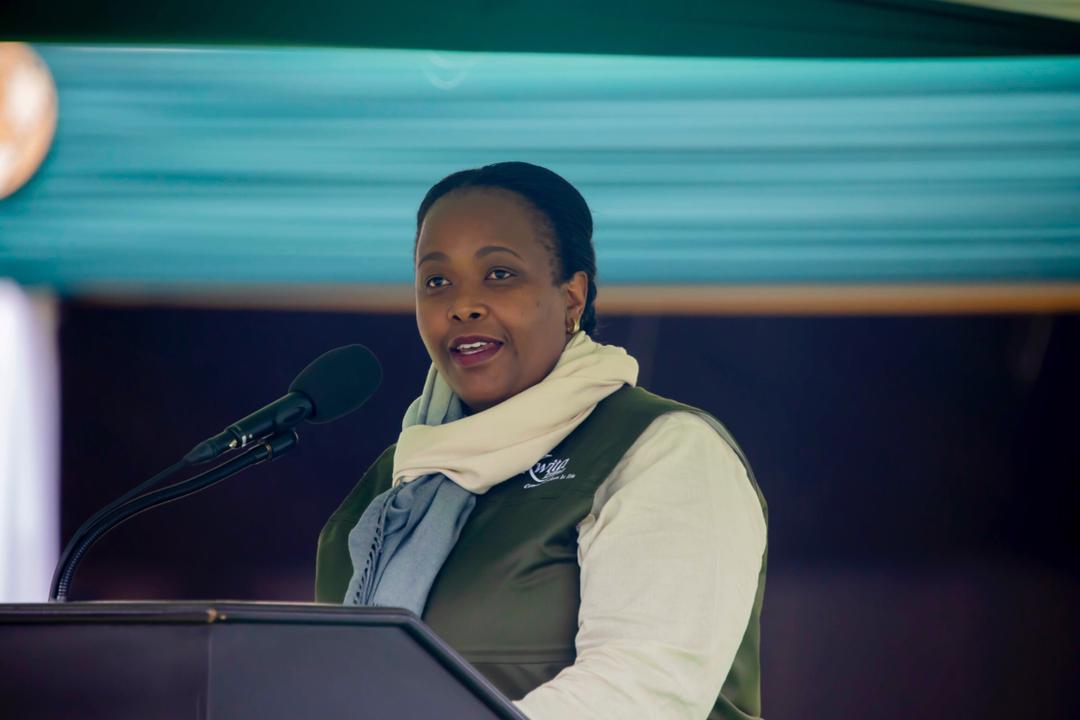 “In Rwanda, we have witnessed the benefits of deliberate, consistent and comprehensive conservation by the Government of Rwanda, and our valuable conservation partners,” she added.

The RDB head said that in a recent census showed that gorilla population had grown by 26% over 6 years.

“The 20 baby gorillas we have given names today add to that sustainable future. And the presence of all of you today individually and collectively help to secure their future.

Akamanzi said that following the Covid-19 pandemic which affected many sectors of the economy, including tourism, the industry is now on a rebound and promising to get back to the pre-Covid period performance.

“The first half of 2022 already indicated that we had reached 80% of tourism revenues pre-pandemic, while revenues of national parks have slightly exceeded pre-pandemic levels. Recovery is underway,” Akamanzi said.

She added that despite the pandemic, Rwanda registered total new investments in the tourism sector worth $353million in 2020 and 2021.

Parliament: What To Expect In the Public Hearing Starting Next Week