It was a morning filled with jubilation as hundreds of participants sung and danced to patriotic songs at parliament today, but also reflection and emotions as the First Lady Mrs Jeannette Kagame opened the 8th Annual Forum of the Unity Club. The First Lady transported the audience in a journey reliving the difficult past of this nation, the struggle to bring back to life a destroyed land, and the importance of reviving the traditional values at the foundation of a peaceful nation for its different generations.

Female spouses of former and current cabinet ministers as well as former and current women ministers, chaired by the First Lady, are part of Unity Club, an organisation whose mission is to enhance unity and peace to achieve sustainable development in Rwanda.

They had come to share ideas and outline achievements registered as well as challenges faced now and those ahead. The work done by the charity, so far? Very impressive!

It has played role in unity and reconciliation, helping orphans and widows of the genocide, and many more grueling post-genocide challenges Rwanda is facing.

Present at the event were the Prime Minister, Senate President, Ministers; ambassadors and governors as well as district mayors and heads of government institutions, among others.

Mrs. Kagame began her speech saying, “I want to be treated here as a member of Unity Club, and not a special guest”, attracting applause.

She then spoke about the struggles the country is facing, and passionately described how much the people of Rwanda have fought back to maintain the country’s progress and milestones registered.

Until now, all was good. With the audience attentively listening to her.

First, she took back the audience through the dark days when Rwandans turned against each other, and almost wiping out the entire nation.

As she spoke, emotions set in, the moment she began talking about to build a ‘good future generation.”

“In such a forum and many others we had before, we expect a lot of ideas that help build our nation. I have a feeling you all share the same with me,” she said.

Then she posed for seconds, as she struggled with holding back her tears, before continuing with her speech.

“After 20 years, our country is born again. A lot has been done to re-unite Rwandans and the results are realized…but we still have a long journey…” she continued.

For her, the scars left by the wounds of the genocide are very large and troubling. Helpless orphans and children born out of rape, and many others who need nurturing is an immense challenge that denies her sleep.

As she spoke more about building the future generation, she again fought back tears. While the audience was silent, many began whipping away their tears too.

As Mrs. Kagame explained how such challenges bore what is called ‘Ndi Umunyarwanda’ programme, which is highly supported by Unity Club.

“The reason this programme has been effective is because of our common understanding of the worst period of bad leadership we went through,” the First lady said. “This affected us and our children,” she said, emotionally.

As she wound her speech, she reminded leaders to continue building a strong foundation focusing on the future of the youths who will build the country.

Later, Bishop John Rucyahana, the President of the National Unity and Reconciliation Commission, Dr. Monique Nzanzabaganwa, the Deputy Governor of the Central Bank, led a panel that discussed Rwanda’s history.

Local Government Minister, Francis Kaboneka, said that, “We are here discussing how to build our country, but we should remember something that poses a big danger for us.”

“We never get time to sit with our children and teach them how to be good future leaders. Everyone here should spare time to do so,” Kaboneka added.

Meanwhile, the First Lady said that leaders have the responsibility to be exemplary to their citizens in order to shape a proper society. “Let’s work as a team…and remember that we have Rwandans we lead. We should be exemplary to them and protect their values even in the dark days.”

Later tonight, Unity Club is expected to host the Unity Award 2015 ceremony at Serena Hotel, where President Paul Kagame, as a guest of Honor, will award 17 ‘protectors of the friendship pact’.

Those awarded are recognised for their outstanding acts during the genocide, leading them to risk their lives to protect those of others, paying with their own lives their decisions to protect the vulnerable ones, and working tirelessly to keep alive the memory of those lost to the Genocide. 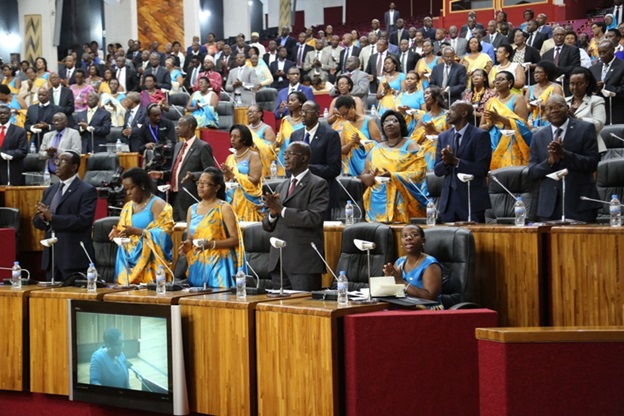