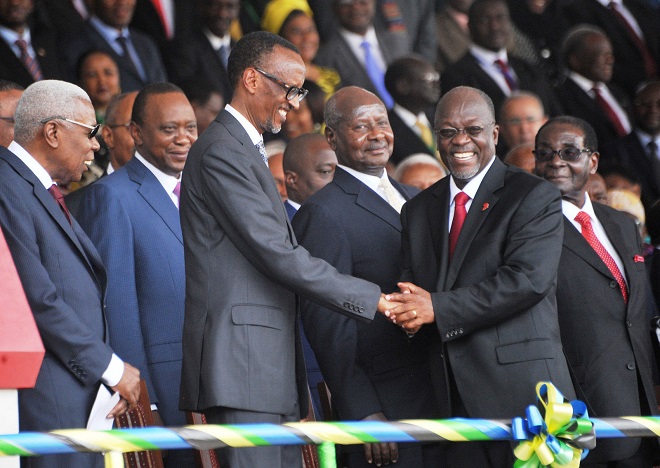 Days before newly elected Tanzania President John Pombe Magufuli  was to be inaugurated, speculation was rife on social media that President Paul Kagame of Rwanda would boycott the event. But as KT Press reports, every observer was proved wrong when the D-Day came.

At around 11:17am (Tanzania local time), it was announced on the public address system inside the Uhuru Stadium that  President Kagame’s convoy had arrived. There was some silence, then after about a minute, Kagame emerged from his car.

As his image appeared on the screens, there was sudden break into cheering, dance and drumming. Throughout the next few minutes as Kagame was ushered  up the stairs, the applause did not die down, until he took his seat.

On Tanzanian state broadcaster TBC which was airing the event live, the commentators were not spared from the vibrant mood they were witnessing as their countrymen welcomed Kagame.

“The joyful reception which President of Rwanda is getting demonstrates the strong friendship of the peoples of our two countries,” said one of the commentators. No other incumbents shared similar reception.

President Kagame was among heads of state who graced the event on Thursday following the presidential polls on October 25. The general elections ended the 10year presence of President Jakaya Kikwete.

Inside the stadium, President Kagame had a front row seat. In the world of diplomacy, that was clear indication that the new dispensation wants a clean break from the confrontational attitude of the outgoing establishment.

For years, relations between Tanzania and its regional neighbours stayed in the cold amid Dar es Salaam’s reluctance to agree to much of the agenda of the East African Community. Then came 26th June 2013.

Inside a closed door session for Heads of State at the African Union in Ethiopia, President Kikwete advanced that the Government of Rwanda negotiates with its rebels in the Democratic Republic of Congo. The so called democratic forces for the liberation of Rwanda (FDLR) executed the genocide against Tutsis in Rwanda and fled to the forests of the lawless vast country.

Either by design or coincidence, French broadcaster RFI is the one which broke the story. Rwanda has inducted 33 French military and political officials for aiding the genocide machinery.

By President Kikwete suggesting talks between the militia group with a sitting government, was considered in Rwanda and beyond as an endorsement that the genocide is questionable.

Back at Uhuru stadium, elect-leader and bride of the event, President Magufuli  arrived sometime before noon. It was at around 12:16 that Magufuli  stepped right in front of Kagame.

The beaming smiles and longer-than-usual handshake with Kagame was there for all to see. Kagame was seated next to Ethiopian PM Hailamariam Desalegn and Uganda’s President Yoweri Museveni.

The image on the giant screens and in after-event available photos clearly show the attention down on the Kagame- Magufuli  encounter. Even then, there was noticeable cheers as the two leaders gripped each other’s arm.

President Magufuli  moved on to greet other leaders, but with Kagame, there – a piece of history had already been written.